Thoughtful experimentation takes the lead on this new bar’s menu. 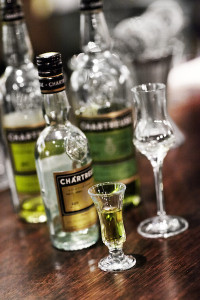 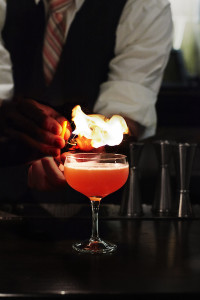 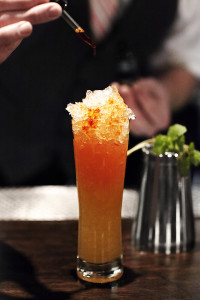 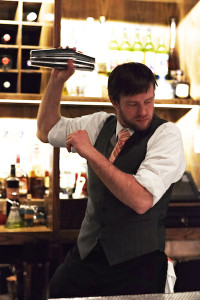 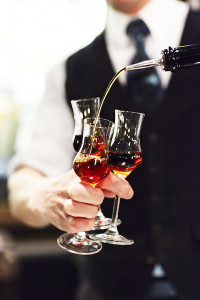 “We’re only at the cusp of innovation,” says Troy Sidle, a partner at the new upscale, upstairs Avenue B bar Pouring Ribbons, where mixological theatrics take a back seat to methodical experimentation.

Sidle hails from Chicago’s Violet Hour, an elegant, acclaimed speakeasy he created with his partners at the dream team cocktail think tank Alchemy Consulting: Joaquin Simo (formerly of Death & Co. and named “Bartender of the Year” for 2012 at Tales of the Cocktail, basically the Academy Awards for mixologists), Toby Maloney (partner in the Violet Hour, an alum of both Milk & Honey and Pegu Club, and Sidle’s mentor), and Jason Cott, the behind-the-scenes brain who keeps the businesses stirring and sound.

At the Violet Hour, learning-by-tasting was encouraged (Sidle: “You taste Crème de Violette from a fresh bottle vs. a bottle opened a month ago—because, why wouldn’t you?”) and a similar culture prevails at Pouring Ribbons, Alchemy’s New York debut, named for the twisty helix that forms mid-air when one properly pours the contents of a martini (gin, naturally) from shaker to glass.

There are surprisingly few bottles behind the bar—no standbys like Absolut and Stoli here. Instead, Simo has carefully curated the spirits that appear in the bar’s 30 cocktails with surprising co-stars such as corn milk, beet juice, and housemade Falernum. But those spirits can also stand alone, as demonstrated by how they appear on the menu—American and international whiskies; brandy; rum; agave, amari and liqueurs; fortified wines (unheard of!); and a section demurely entitled “northern distillates,” where you will find the bar’s one and only vodka, a genever, and an aquavit.

“Most people come in and say, ‘I don’t know what any of this is,’” Sidle admits. To help, the team created not just a cocktail list but also a cocktail graph, to guide choices in a user-friendly format, plotting each drink on a matrix spanning from “refreshing” to “spirituous” on one axis, and “comforting” to “adventurous” on the other.

Obviously this crew feels the deity is in the details. Perfectly clear large ice (the slower to melt, my dear) is meticulously shaped for each of the glasses—cylinders for a rocks glass, shards for a Collins. And presentation is a study in precision. The Bonita Applebum (applejack, rum) arrives wearing a frothy cap of egg whites, finished with Angostura bitters dotted in a neat semicircle. “We literally draw the drinks as we come up with them,” admits Simó. “We sketch them out.”

But Pouring Ribbons is already known not just for those cocktails but also for thoughtful experiments, like a recent night when multiple pours of Cynar were laid out on the bar served nine different ways: cold, hot, with honey, with lime juice, with cream, with salt, with MSG, with Peychaud’s bitters and with orange flower water—just to see the impact each might have in a cocktail.

And the vintage Chartreuse collection has been gathering attention as patrons sample side-by-side old and modern-day versions of the herbal liqueur made by Carthusian monks in France. A full shelf of the bar, as well as a full page of the cocktail menu, dedicates space to 15 new, old and rare variations, culled from Sidle’s own collection.

“Chartreuse is a great catalyst for learning,” he reflects, adding that he plans to visit a monastic distillery this summer. In a temple of drinks, the ultimate thirst is for knowledge: “I still have a lot to learn about this product.”