A Chef and a Journalist Meet in the Reel World 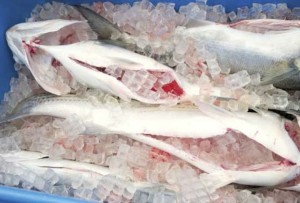 Judging by its cover, I feared Four Fish would be another eco-treatise detailing the collapse of marine populations and the failure of fisheries management to grapple with the dire state of affairs in the oceans. Yes, Paul Greenberg’s new book examines the consequences of the world’s increasingly voracious global appetite for fish. But Paul’s not just a journalist, he’s also a diehard fisherman. So what would it be like to go fishing with the guy? Would the conversation be a volley of sustainability facts, high-level discourse attempting to chart the course of the marine conservation movement?

In fact, what Paul likes best is to fish and to talk fish, tell fish tales, listen to more fish tales and learn everything he can about fish. This fall, during the Chefs’ Collaborative Summit in Boston, we took a charter boat to a spot anchored a hundred feet off a jetty of approach lights to Logan airport, where we “chummed with pogies” for bluefish and striped bass, both abundant and well-managed species.

Paul queried all of us: the chefs, the skipper, his mate and the West Coast seafood expert on board. “Have you ever caught a striper? Much fluke yet this season? How far out do you have to go to catch cod? Haddock’s my favorite. Any haddock yet? What’s it like fishing for Yukon salmon? What do you guys like to cook? What’s your favorite way to cook blues? Ever do much with porgies?” Paul is totally at ease with rod in hand, making his way about the crowded stern keeping lines clear and hooks freshly baited, all the while discussing the merits and pitfalls of closed-system aquaculture.

Paul’s rod was the first to get a hit. Of course it was, he’s Mr. Fish. We all shifted about the stern giving him room to follow the fish’s death circles with the skipper finally bringing it on board in a net: a nice big blue flopping on the deck. The West Coast industry man on board demonstrated his best practice for fish care by stunning the fish before bleeding it out and finally gutting and icing it. Two blues and two stripers later, we had our quarry and headed back to shore. Whether it was the journalist or the fish lover in Paul, I’m not sure, but he sent repeated emails of inquiry as to the quality of our catch.