The Magic of the Vegan Caesar Salad at Scarr’s Pizza

The classic salad has been reinvented here, but stays true to its migratory roots. 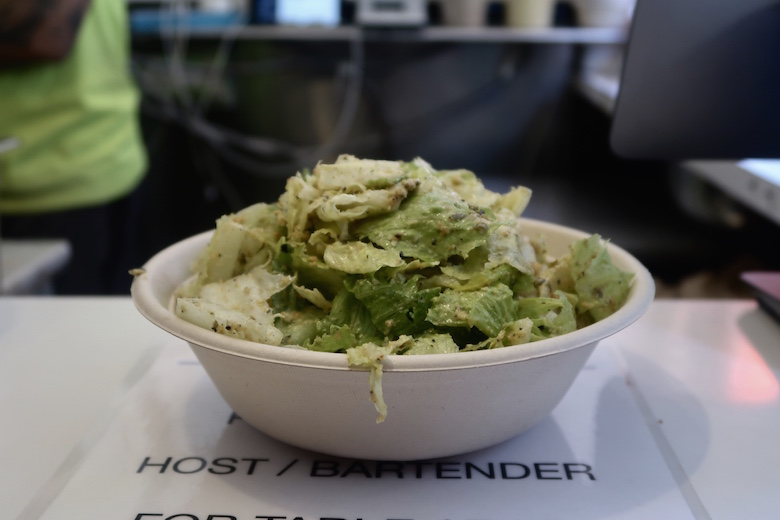 The umami-rich salad. Photo by the author.

Caesar Cardini, restaurateur and owner of what is known today as Hotel Caesar in Tijuana, Baja California, was credited with inventing the Caesar salad in the late 1920s. His daughter, Rosa Maria Cardini, claims her father whipped up the dish on July 4, 1924. The restaurant was running low on ingredients that night, the story goes—according to Mexican food historian Diana Kennedy—when some aviators from San Diego crossed the border to avoid Prohibition laws and settled at Cardini’s place. He threw together this salad on a whim, with scraps: raw egg yolk, parmesan cheese and other leftovers on whole romaine leaves. Since then the salad has taken the world by storm, becoming a mainstay in global cuisine.

Ninety-two years since its invention, and over 2,000 miles east, a different Caesar salad emerged. The year was 2016. Chef Gerardo Gonzalez, who is known for his work with Lalito in Chinatown, was working at El Rey, a luncheonette and coffee spot with southern California classics and a bounty of vegan and vegetarian options. It’s how he met Scarr Pimentel of Scarr’s Pizza.

“Him and his wife were always super supporters [and] regular customers there [at El Rey]; [they’d visit] like three times a day,” Gonzalez shared over the phone from his home in the Caribbean, where he’s opening a new restaurant. Pimentel was in the midst of opening up Scarr’s and approached Gonzalez about developing a salad for his new spot, with one caveat: Make it vegan.

Gonzalez, originally from Logan Heights in San Diego, California, took to his bicultural roots—the driving force of his cooking—and ended up with a vegan version of the Caesar salad, that little-known Mexican dish. The chef has a deep appreciation for border food like this salad, which he calls a “proud cultural marker,” adding that it’s a “prime example of the fluidity of culture and migration.”

This umami-heavy dish retains depth in its vegan version through the use of seaweed, spirulina, nutritional yeast, black pepper and more than one type of acid. If you visit Scarr’s, you’ll see them make it for you on the spot behind the register. The cooks are at the ready with a large stainless steel mixing bowl with cut-up romaine lettuce and a quart cup full of finely minced umami bombs; garlic bread crumbs are used in place of croutons; and they sprinkle the leaves like a gracious first soft winter snowfall. It’s a performance, but also practical and easy to construct by design. The “ultimate” of collaborations, as Gonzalez puts it, has gained a sort of cult following in the city. And because of that, he says, “maybe it’s a stretch, but it feels like a convergence of exactly what the Caesar salad was. There’s a lot of different cultures happening in downtown New York right now, and what people want out of their food.”

The chef told me it was one of his favorite dishes of all-time, and he revels in its history, which mirrors his own; seeing it reinvented for a new historical frontier in one of the United State’s most ethnically diverse cities has been magical. “It’s still one of my proudest recipes,” he says.