In SoHo, an Encounter with a Home Kitchen that Cooks for You

From the fridge to the plate, Innit’s software relays ingredient information and recipes to your cooking devices to prepare consistently delicious meals. 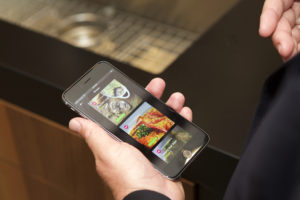 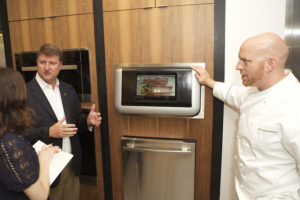 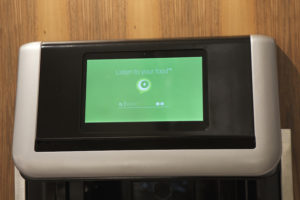 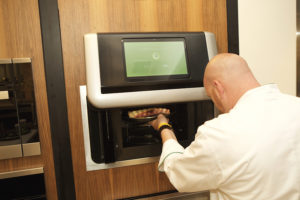 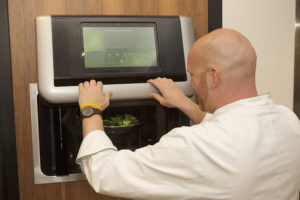 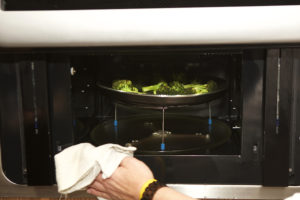 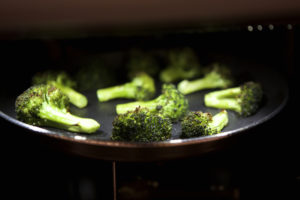 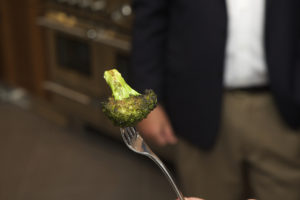 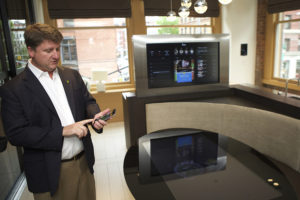 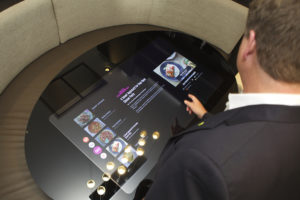 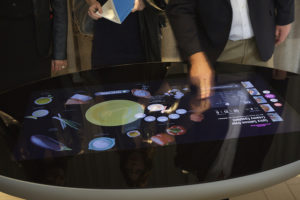 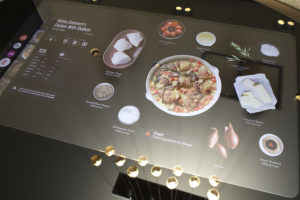 Editor’s note: In anticipation of next month’s Food Loves Tech event, we’ve launched a regular column to explore new and intriguing trends in food and drink. Read more about and get your tickets to Food Loves Tech here and enter the code EDIBLEFLT to get $15 off the regular ticket price.

This March, Kevin Brown, co-founder and CEO of the Innit smart kitchen, and Will Rosenzweig, dean of the Culinary Institute of America’s Food Business School, led a discussion about the “digitization of food.” With over 200 attendees hailing from as far afield as Australia and ranging from business owners to chefs, the speakers addressed a growing foodtech movement. The goal was to clarify what’s “in it” for Innit. So far as Brown’s concerned, the answer is building a “GPS for food.”

Fast-forward to last week when Brown, hot off the heels of a speech about food waste at Seeds & Chips, an innovation summit held in Milan, Italy, arrived in New York to showcase his technology at Pirch, a futuristic bathroom and kitchen showroom brand that just opened its first SoHo store.

Brown and Innit chef Daniel Norton, whose résumé includes food truck celebdom and rockstar status among Silicon Valley eaters, braised ribs and broccoli for an eager crowd. Standing in a Pirch kitchen fully equipped with Innit’s cooking technology or, as Brown calls it, “an operating system” for food, the room fills with tantalizing smells. Visitors watch, like curious lab scientists, as the demonstration unfolds from inside a glass-walled kitchen.

Innit’s technology creates “smart” relationships between appliances and food. For example, sensors currently found in home monitoring units make it possible for your “veggies to talk to your fridge,” as Brown notes. The conversation doesn’t stop there though: they can also talk to your oven, your grocery store and your doctor, too. From a sustainability perspective, Brown’s refrigerator also uses those sensors and your shopping data to know when food is still fresh. He hopes this will encourage a reduction in food waste.

Half Back to the Future II, half Chernow-esque Food Porn voyeurs, Norton and Brown are showcasing their technology using a prototype cooking device designed by Innit. It’s a curved-edged steel box about the size of a microwave complete with an almost Delorean-esque sliding front door, set into expensive wood units with an interactive digital face. The device is as stylish, in a this-how-you-coveted-your-first-cell-phone sort of way, as it is unique. Irrespective of the food cooking inside, this pizzazz is sure to get both techies and food lovers drooling. The end product looks like it could be a spaceship in-flight entertainment and cooking system in one. In fact based on the complex thermodynamic and “food whispering” technology inside, it probably could be. Oven, meet your iPad.

The prototype at Pirch was built by Innit to demonstrate their technology and inspire would-be customers and kitchen manufacturers. However the start-up isn’t in the manufacturing game. That’s because Innit is building the software that’ll power the next generation of kitchen hardware already under development by many big brands today. The early noughties Microsoft computing brunt to your oven’s chrome-mounted Apple style for example, Brown’s aim is to make his “food operating system” the backbone of any kitchen device, regardless of price-point. Unlike any battle for your heartstrings by the tech giants however, this is a business model where both style and smarts can potentially have it all.

Innit’s technology creates “smart” relationships between appliances and food. For example, sensors currently found in home-monitoring units make it possible for your “veggies to talk to your fridge.”

That’s because Innit is a well-timed venture. Today, many kitchen and aspiring food brands are already incorporating a range of WiFi features into their products. A long-standing commodity, low average prices for WiFi technology mean it adds a negligible extra cost per unit, which brands hope will support greater adoption by consumers.

For Brown, however, WiFi is just the tip of the iceberg. Innit insists that these devices will help you: “store, prepare and cook,” no culinary expertise required. Innit has designed a series of visual tutorials that can be displayed on any digital screen such as an iPad or the device itself and every meal can be a “Cordon Bleu” experience. That’s also why the Innit team boasts the combined culinary expertise of chief “consumer experience” 0fficer and former White House chef Sam Kass, France’s finest academies and global consumer packaged goods founder-advocate Eugenio Minvielle.

With Innit, cooking can be as simple as selecting the recipe you want based on the ingredients you have. Simply select a recipe from a compendium of food sources, which the team hopes to curate through partnerships with publishers and app developers, then let sensors weigh and monitor your ingredients. Innit’s software will then relay the recipe instructions to your cooking devices to cook them to perfection. For those wary of this self-driving car version of cooking, Innit still requires a “hands-on” experience. The chopping and prepping is still up to you. Brown emphasizes this technology is designed to make people “want to cook more at home.” The family-minded CEO proudly recalls how the technology has helped his wife and kids enjoy more meals together.

Innit has designed a series of visual tutorials that can displayed on any digital screen such as an iPad or the device itself and every meal can be a “Cordon Bleu” experience.

Back at Pirch, Brown and chef Norton set their system into motion. A gentle hum of microwave, convection and algorithmic funk fills the room. Moments earlier, a plate of raw broccoli had chosen to boldly go where very few florets have gone before: into an Innit oven. The large, front-mounted digital display provides the controls and steps to achieving perfect caramelization lift-off as well as real-time feedback on the food being cooked. Those curious scientists watch intently as the mission beams back proud images of rotating vegetables in their space-age cooking vehicle. In a few short minutes, cooking is complete. With consumers professing a preference for convenience, discovering this brave new world of food is disconcertingly quick. The verdict? Caramelized broccoli score. Perhaps these are the “moments of joy,” Brown is talking about.

If vegetables aren’t your thing try ribs instead; they’ll be communicating with your oven to tease the braising time down from two and a half or three hours to 40 minutes. Not sure if your guests’ health restrictions will work with your dinner plan? Innit’s technology, a neat segue from apps such as Ingredient1, will tell you where the flash-points might be and help pick different ingredients that match your recipe accordingly.

Overall, Innit’s glimpse into the future of cooking is an exciting one. Seeing the technology in action feels like one of those moments that will replay as grainy black-and-white footage in your mental archives. “How did we ever cook or think about food before!” your now wizened-mind might exclaim. The potential to curb food waste, boost food safety and free home cooking of any skills-bias are exciting. However it’s unclear whether these aspects will really change the dynamics of how we approach or interact around food. Cooking food, especially in ways that require a computer program, isn’t synonymous with experiencing it on a human level. However technology like this does have the power to impact food culture in general. Here’s hoping that GPS does indeed guide us all home.