A mission to educate non-Thai New Yorkers about options beyond pineapple fried rice encouraged the Fish Cheeks team stick with their instincts. 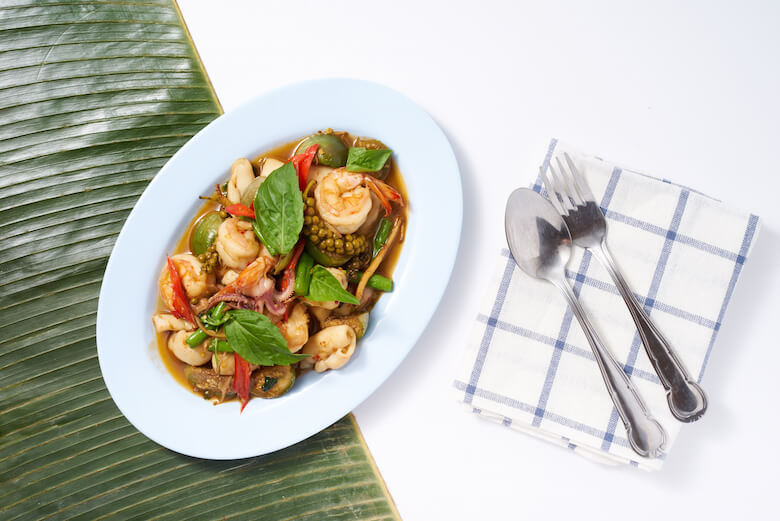 Walk into pretty much any Thai restaurant in Manhattan and you can order without opening a menu: pad Thai, spring rolls, maybe some dumplings and chicken with basil sauce. Sticky sweet noodles have become the icon of New York’s seemingly saturated Thai restaurant scene, but, for Thai transplants, Manhattan’s options are grim.

Fish Cheeks, which opened on a cozy, restaurant-saturated stretch of Bond Street (Mile End, Il Buco) in September 2016, boasts nearly a full reservation list every night, plus a star from Pete Wells, in its first year of serving dishes like mussels with sweet basil, Goong Aob Woon Senn (baked shrimp and pork belly, with glass noodles) and crispy branzino in garlicky fish sauce.

“There’s no reason for Thai restaurant owners to dumb down the taste of the cuisine,” said Jennifer Saesue, who co-founded Fish Cheeks with brothers and co-chefs Chat and Ohm Suansilphong. The three Thailand-raised partners, frustrated with the lack of authentic Thai restaurants in the city, noted a specific absence in seafood-focused Thai restaurants in New York, and, thus, a restaurant distinct from any other in the five boroughs opened in NoHo.

“We didn’t want the dark brown walls, Buddha in the center, gold leaf Thai theme,” Saesue said of Fish Cheeks’ décor. Instead, the team opted for a contemporary dining room, reminiscent of what you may actually see in today’s Bangkok. The restaurant welcomes its steady flow of table-filling diners into a white-paneled dining room, accented with bright chairs in primary colors, basket-style light fixtures and life-size fish lamps dangling over the bar, which is decorated in a colorful tile pattern reminiscent of Thai temples (though guests have assumed the pattern to be fish scales). “It’s still Thai in certain ways, but you can’t actually tell right away,” Saesue said.

Fish Cheeks has proudly established itself as a No Pad Thai Zone, reminding diners via a specials board hanging in the dining room of the restaurant’s anti-noodle catchphrase.

“Thai people don’t eat pad Thai every single day,” Saesue laughed. “It’s not that we don’t like it; there’s just a lot more Thai food we can offer.” Keeping familiar Americanized dishes off the menu pushes diners to order fishes rare to New York menus and spices often left out of your nightly Seamless delivery of penang curry.

“In the beginning, we expected a lot of misunderstanding and a lot of ‘oh my God, what is this?’ but people are really open-minded about the menu,” Saesue said. A mission to educate non-Thai New Yorkers about options beyond pineapple fried rice encouraged the Fish Cheeks team stick with their instincts, originally listing 100 of their favorite Thai dishes, then curating the menu down to a more cohesive selection.

Chat Suansilphong, who learned to cook at the age of five from his father and further refined his technique at the Culinary Institute of America in Hyde Park as well as at Bangkok’s Nahm, also worried about the menu he was offering. “When we first opened, I was a little worried because it was authentic and I didn’t compromise anything,” Suansilphong said. “We were not toning it down.”

People took the bait, returning for favorites like crab curry made with fresh coconut milk and mortar-and-pestle-pulverized curry paste. A seasonally changing menu with frequently changing specials lures in neighborhood regulars and Thai regulars who “miss the flavors” of Thailand.

The biggest challenge during Fish Cheeks’ yearlong success? The pricing, and a pervasive misconception that immigrant food should be cheap. Fish Cheeks’ dishes range from $12 for small seafood plates to $32 for a shareable whole fish. Next door, Mile End sells mini hot dogs wrapped in dough for $11, and Il Buco’s whole fish runs at $34.

“It’s hard to find good ingredients and keep the cost down,” Suansilphong said of the pressure to conform to pad Thai’s frequent $9.99 takeout price point. Often, he finds himself underselling food, but notes that once people try his, they understand that they’re not tasting cheap ingredients but rather appreciating the flavor of fish from Fulton Fish Market and produce from Baldor delivered fresh each morning. Specialty products hand-sourced from Queens and Thailand are also used in the kitchen, which maintains a strict no-cans policy.

Beyond introducing more Thai dishes to the New York scene, like the increasingly popular spicy sour orange curry that shocks first-timers with its complex flavor, Fish Cheeks is demonstrating the value of immigrant food. The restaurant forces its non-Thai diners to reconsider this cuisine, what it can be and how good it can really taste. And New Yorkers are buying it. “People love it,” Suansilphong said. “They keep coming back!”