Salad for President‘s Julia Sherman travels around the world to eat, photograph and connect with the people and places that inspire the salad chain’s menu. 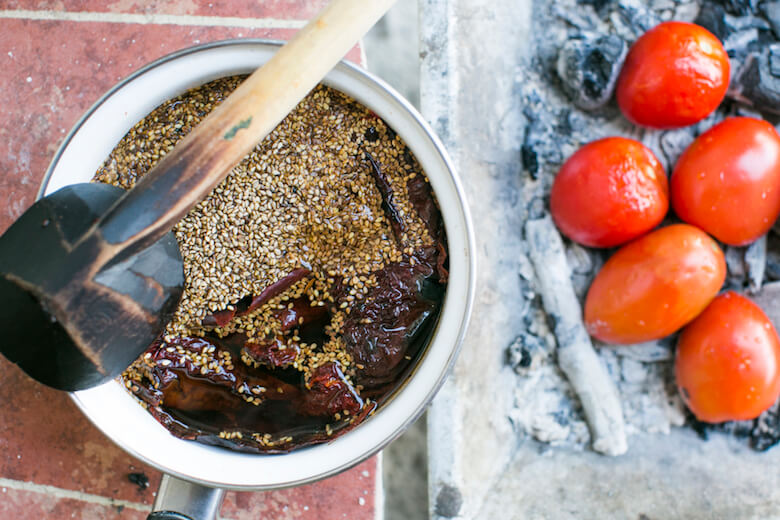 Julia Sherman works with Chopt’s culinary team when she returns from her travels to convert her experiences into as authentic as possible seasonal “destination salads” that rotate every 60 days.

A colorful New Orleans-based used cookbook store with over 11,000 titles, an annual Basque coastline fishermen’s festival, a mole-making lesson in Oaxaca—you might guess that these are destinations from Bourdain’s Parts Unknown or an issue of Saveur. You might not guess, though, that they’re where fast-casual chain Chopt goes to build their menus.

Yet, these are only a few of the places that their creative director Julia Sherman has traveled these past three years in search of flavors to inspire Chopt’s salads. The dream gig is simple: Sherman gleans ideas from communities around the world to be translated into your weekday lunch. Her toasting red ancho chiles and making fresh tortillas from scratch, say, informs their current spicy chicken verde bowl with an optional drizzle of Mexican chile oil.

Sherman was actually a salad aficionado well before she joined Chopt. She’s also the author of the recently released Salad for President: A Cookbook Inspired by Artists taken from her eponymous blog, where since 2011, she’s documented the everyday food routines of accomplished creatives (turns out they eat a lot of vegetables). Salad for President is also directly connected to her 2014 transformation of the MoMA PS1 roof into a salad garden and public space, quickly followed by another salad garden commission at the Los Angeles Getty Museum in 2015.

Chopt co-founders Tony Shure and Colin McCabe discovered Sherman’s work online and quickly recognized a shared love for the same dish. They found her artistic approach both refreshing and parallel with their own tastes, and in an unconventional move for a fast-casual chain, they decided to recruit the artist to become their creative director.

Dude, that’s ALL CHEESE. #ParmeggianoReggiano 4 life. Check my story for all the BTS cheesiness.

Nowadays at Chopt, Sherman, Shure, McCabe and often other team members travel everywhere from Japan for three weeks to a chile conservatory in Peru, sharing visits on the Chopt Travels blog and Instagram along the way. Sherman approaches these atypical business trips as a focused exploration of the local culture, soliciting her own network for connections and leads to do everything from making Parmesan-Reggiano at the source to going uni spear-fishing with Chopt’s executive chef Aneesha Hargrave in Vietnam. Wherever they’re headed, it’s best she plans for the unplanned, too, ideally leaving some wiggle room for opportunities that might arise when she’s on the ground. She didn’t have plans to join the olive harvest during her recent trip to Puglia, for example, but fortunately had the chance to after making some local connections.

Sherman then meets up with Chopt’s culinary team when she returns to convert her travels into as authentic as possible seasonal “destination salads” that rotate every 60 days. With her research as their inspiration, the Chopt Food & Beverage team strives to translate ingredients and techniques that might not traditionally be presented in salads into just that. They prioritize local ingredients for any of the cities where they’re currently located, sourcing seasonally from the region (e.g., the tri-state area for us New Yorkers) as much as they can. They also use as many of a destination’s iconic flavors as purchasing and customers’ palates will allow, creating menus with several approachable and appealing options ranging from a general introduction salad to a deeper cut. This way you can choose to dip your toe into Mexican flavors with a street-food-inspired Caesar, for example, or go a bit further with their current bowl that includes braised tomatillo chicken, quinoa hominy blend, roasted seasonal squash, spicy pickled vegetables, kale, purple cabbage and cilantro.

You don’t have to go far to find a Chopt in New York City. The fast-casual salad business first opened 16 years ago at Union Square and has since launched 17 more eateries in Manhattan alone. They also have locations along the East Coast in Connecticut, New Jersey, DC, Maryland, Virginia and North Carolina. While their destination salads are their centerpiece, diners are also encouraged to make their own compositions or pick from menu mainstays like Mediterranean Falafel, Mexicali Vegan and Santa Fe.

You can read about the inspiration for their current Mexico-inspired series both on Chopt Travels and our site. Follow us on Instagram, too, as Julia takes over our account while she’s on the road.