Starting with a Plant Breeder, Chefs Optimize Flavor from Seed to Plate

For decades, flavor has been a non-priority for most plant breeders. Now—thanks to farmers, chefs and diners—that’s starting to change. 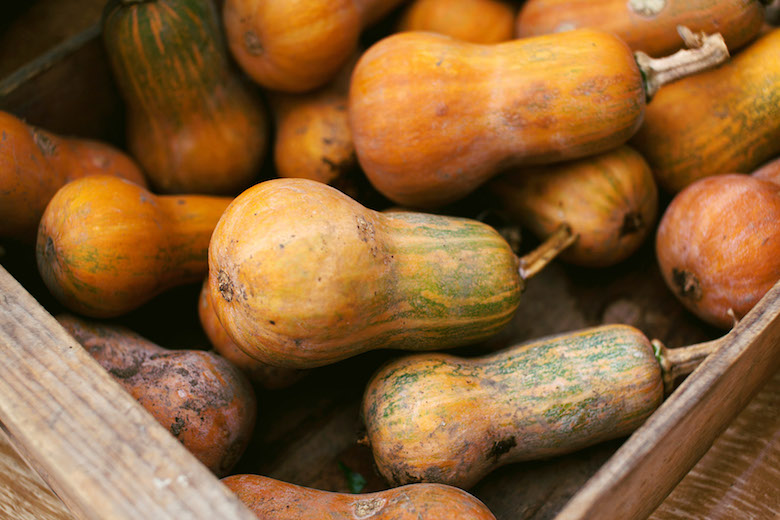 Editor’s note: When we originally published this story last April, many seeds developed by these chef-plant breeder relationships were exclusive. This changed today though with the launch of Row 7 Seed Company: a new venture from chef Dan Barber, Cornell University plant breeder Michael Mazourek and upstate New York seed farmer Matthew Goldfarb that seeks to “overturn the conventional wisdom about seeds, food, and flavor” according to Civil Eats. To better understand their motivations for the new company, we’re revisiting this innovation issue feature exploring why chefs are interested in ingredient quality from the ground up.

For years, Michael Mazourek, an assistant professor at Cornell University’s Plant Breeding and Genetics section, struggled with the same wretched problem: how to determine which of the several thousand unique squash he raised tasted best? When ready to put it to the test, he always went through the same disappointing process of harvesting the fruit, freezing it and then blasting it in the microwave for a few minutes. Perhaps to be expected, it mostly tasted of mushy gunk.

He was using this method in 2009 when Stone Barns Center for Food & Agriculture farm director Jack Algiere introduced him to Dan Barber, chef and co-owner of Blue Hill restaurant in Manhattan and Blue Hill at Stone Barns in Pocantico Hills. Stone Barns had arranged a dinner for a group of Cornell plant breeders, and Mazourek was one of the lucky attendees. Somewhere in conversation that night, Barber mentioned that chefs actually roast squash longer and at higher temperatures to coax out the flavor. A gourd-colored light went on in Mazourek’s head.

Shortly after the dinner, Mazourek followed up with Barber, who said he would be happy to try the fruit of the scientists’ labor. So Mazourek brought Barber some honeynut squash—his lab’s latest creation, a more richly orange and naturally sweet variant than butternut squash. Indeed, the chef’s touch did matter: the roasted-rather-than-microwaved squash was like a completely different food. Mazourek’s mind was blown. “Dan reshaped how I look at my own produce, craft and approach,” he says. 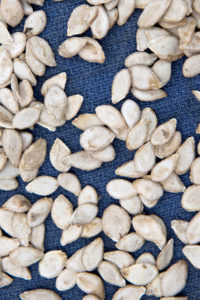 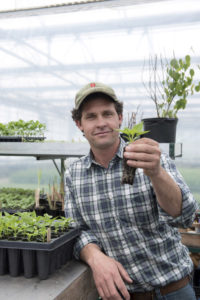 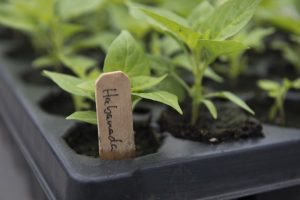 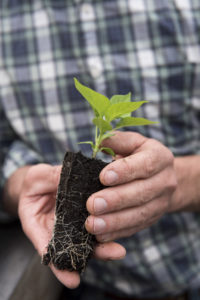 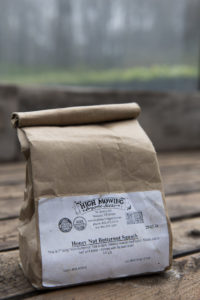 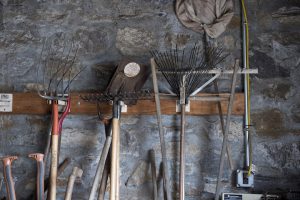 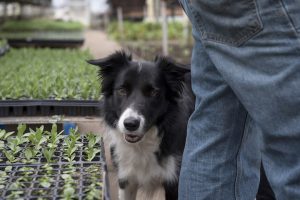 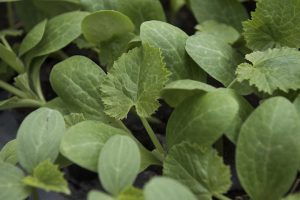 If you’re seeing greenery everywhere when you go out, you’re not alone. Photo by Liz Clayman.

Such flavor and distinctiveness were once critical criteria for American farmers, yet that part of our culinary history has largely been left in the dust of high yields, shelf life and shallow attractiveness. That’s now beginning to change. A burgeoning group of plant breeders, farmers and chefs are at the helm of a nationwide movement to develop richly flavorful varieties for everything from potatoes to peppers. They aim not only to make the process of eating more enjoyable but entice diners to eat truly delicious fresh produce.

First, though, they have to undo the process by which we lost touch with individual plants’ flavor. Especially after World War II, plant breeders began shifting away from culinary ingenuity and instead toward mainstream agriculture. This quantity over quality approach translated into mass production of crops made to be shipped far from their place of origin and grown year-round. Under this new regime, breeders devoted themselves to beefing up features like high yield, transportability, homogeneity and shelf life while flavor and variety largely fell by the wayside. How something actually tasted became an afterthought.

As a result, we’ve been conditioned into believing that butternut squash is so naturally bland that it requires three cups of brown sugar; that greens must be doused in ranch dressing; that potatoes are tasteless conduits for bacon, cheese and sour cream; and that all tomatoes look shiny and lovely and red, but ultimately taste of nothing but water and disappointment. 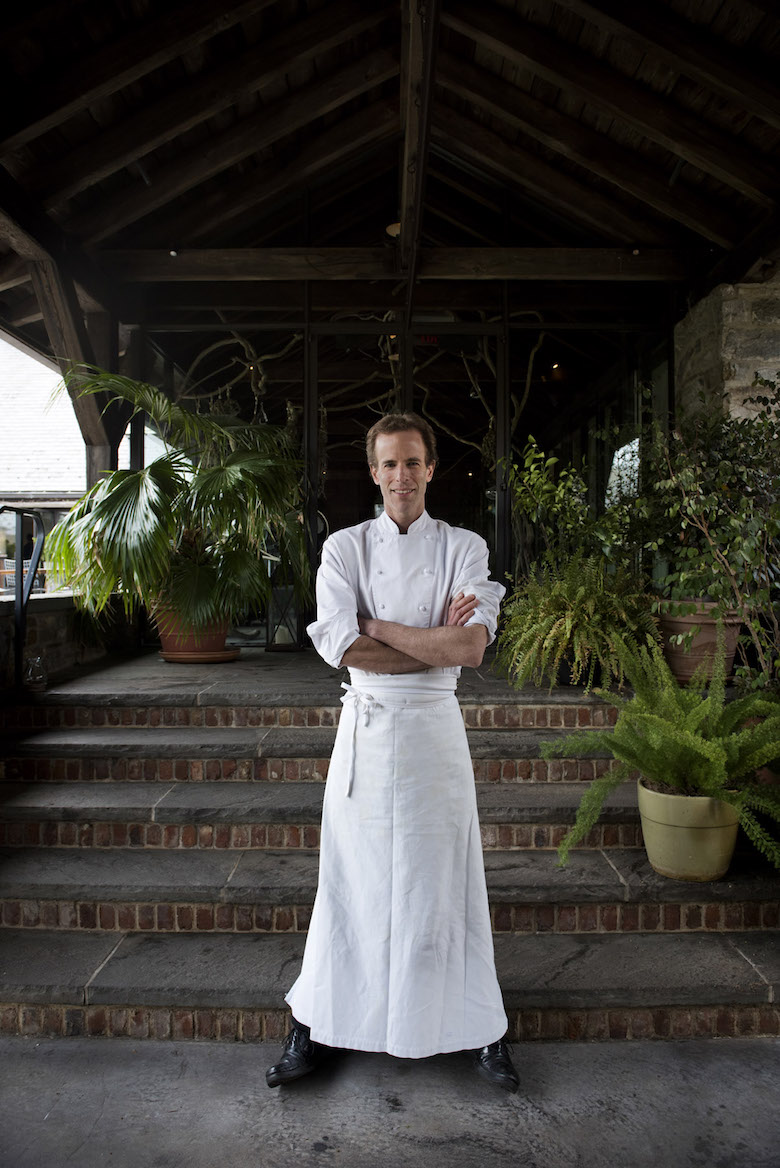 Plant breeder Michael Mazourek credits Dan Barber for reshaping how he looks at his own produce.

The basic scientific process behind coaxing out a crop’s flavor follows the same steps used to select for any horticultural trait, whether it be color, shape or pest resistance. Like choosy bees, scientists cross-pollinate plants with particular characteristics they’re interested in, then repeat the process with the children, grandchildren, great-grandchildren and so on of the original parents, each time reemphasizing the choice traits. Eventually, if all goes as hoped, they wind up with a new crop variety with the enhanced, unique characteristics of their choosing. The process can take anywhere from a year to a decade or longer, depending on the complexity of the plant’s underlying genetics.

Selecting for flavor, though, is trickier than something like disease resistance, which can be easily measured. Crop breeders are adept at enhancing varieties for a given trait, but achieving a certain flavor can be elusive. Taste is subjective and depends on when a crop is harvested, how it is stored, how it is prepared and who is eating it. And unlike chefs, many scientists have neither the richly developed palate nor the culinary skills to help create a widely appealing flavor profile capable of withstanding all these variables.

That’s why partnerships like Barber and Mazourek’s are so critical. Now, whenever Mazourek thinks he has something exceptional in the field, he shares it not on a microwaved plate with his lab mates but with Barber. After the honeynut epiphany, the two worked together to perfect the curvy gourd, and then looped in Jack Algiere, Stone Barns’ farm director, to grow the seed out to become the food Barber prepares. In addition to appearing in dishes at Blue Hill, the now-ubiquitous squash can also be found everywhere from Trader Joe’s to Blue Apron meal kits. The team’s latest projects include a better-tasting winter squash whose vines can be eaten along with the fruit; subtly flavored cucumbers with white rinds; a squash that tastes delicious to people and bees but not to pest beetles; and a habanero pepper with no heat and a more angular build, to discourage home chefs from removing the flavor-packing ribs inside. “A lot of plant breeders have pet projects they’re working on in terms of flavor, but it’s not really viewed as practical,” Mazourek says. “For me, it wasn’t until I connected with Dan that suddenly all of my flavor projects came out.” 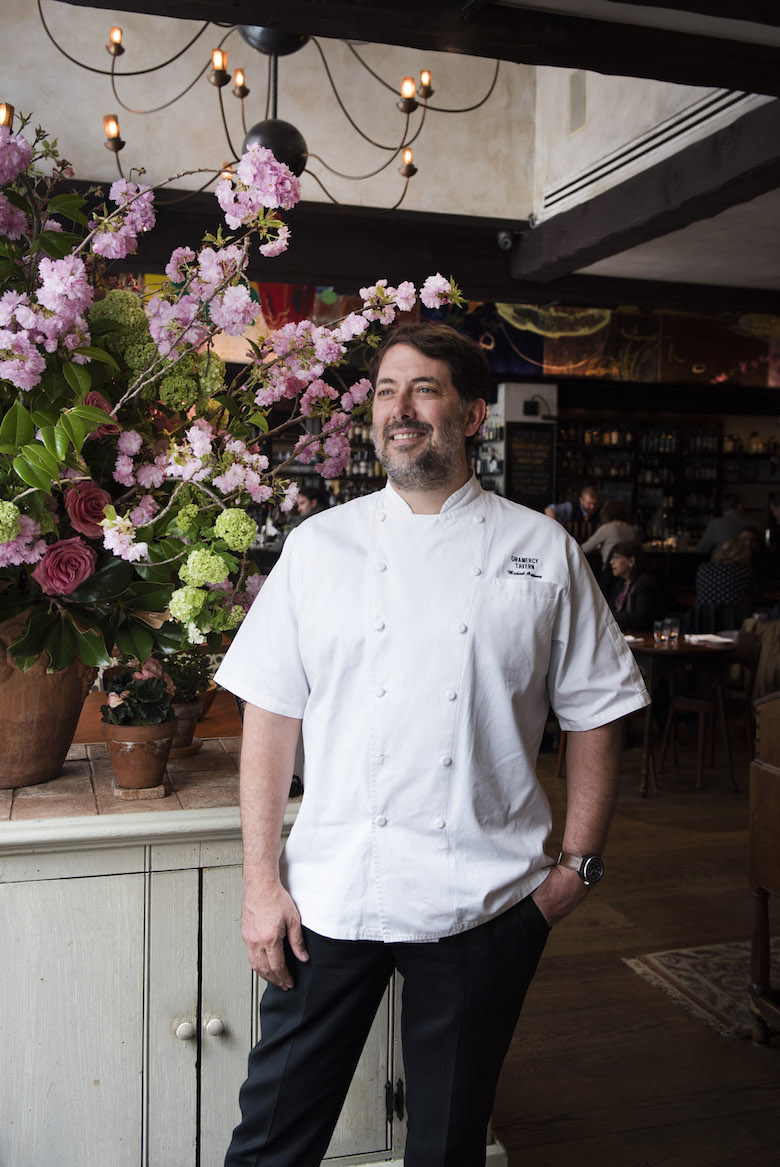 When Mazourek asked Gramercy Tavern chef Mike Anthony if the restaurant industry would be interested in his plants, Anthony said, “Yes, of course, this is a home run.”

It’s not like every plant breeder can have a James Beard Award–winning celebrity chef powerhouse on their speed dial, however. Barber remains something of a unicorn in terms of his intense involvement in breeding for flavor, though he suspects that it will become more common as the movement takes off.

Indeed, others in the city are already utilizing ingredients born of such collaborations. Michael Anthony, executive chef of Gramercy Tavern, regularly uses the Habanada, one of Mazourek’s specially bred peppers that, visually and aromatically, is exactly the same as a habanero. It differs, however, in that it lacks the normal heat intensity of those mean little peppers. “Sometimes that spiciness is completely welcome, but at other times it can be invasive,” Anthony says. “When Michael asked me if the restaurant industry would be interested in a product like this, I told him, ‘Yes, of course, this is a home run.’”

Other pockets of interest are emerging around the country, including in Oregon, Washington and Wisconsin. In 2012, Lane Selman, an agricultural researcher at Oregon State University, founded the Culinary Breeding Network, an initiative that connects plant breeders, farmers and chefs. She’s also arranged three Variety Showcases, events at which breeders exhibit samples of all of their varieties, many of which are not yet on the market. Chefs they pair with choose their favorite of the varieties and prepare delicacies to serve alongside the raw, pickled, dried or plainly baked versions. Last year’s event, attended by more than 300 people, featured entire tables of fennel, carrots, cayenne, barley and more. So far those gatherings have all been based in Oregon, but Selman is considering a move to New York City in 2017. 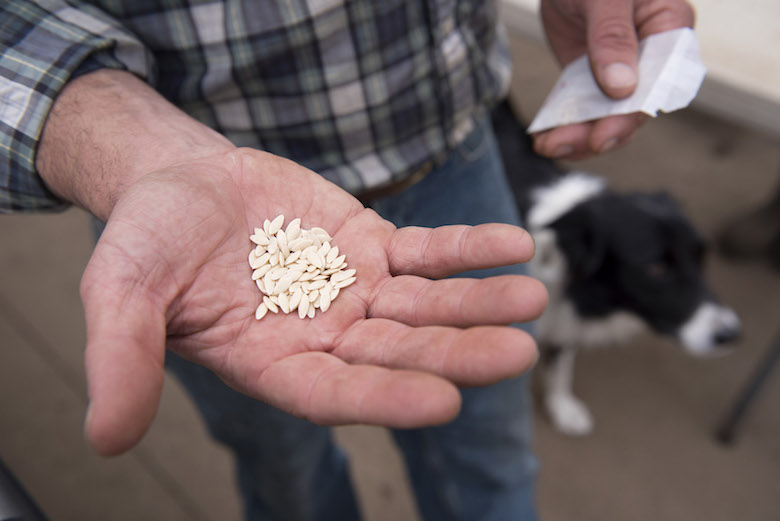 Flavor is not only determined by the pros, however; the public plays the most integral role of all. Yet plant breeders and consumers and diners tend to communicate very little and when they do, it’s as if they’re speaking different languages. What a home chef might describe as bitter, for example, a plant breeder may think of in terms of quinine, glucosinolates or more. Hannah Swegarden, a doctoral student at Cornell University’s School of Integrative Plant Science, is trying to change that, starting with the basics: how to talk about flavor. “I really view this as an opportunity to connect disparate parts of the food system,” Swegarden says.

Working toward this goal, in September Swegarden gave 14 people six different types of kale and sent them home to cook with it. Two weeks later, the group came together to discuss their experiences; most said they liked the softer-leafed varieties, and everyone noticed the plants’ bitterness, though they struggled to describe that flavor in more detailed terms. Some fell back to calling it cabbage or Brussels sprouts–like, while others said it was peppery or sulfurous. “This focus group highlighted just how difficult it is to do descriptive sensory work with consumers,” she says. Eventually, she hopes to make that task easier by developing a kale lexicon.

Even if breeders learn how to tune into the public’s desires, though, chefs still play a paramount role in raising awareness about new crop varieties. Like the fashion industry does for clothes or celebrities do for baby names, those at the helm of America’s top restaurants hold considerable sway over the rest of the country’s food trends. Just look at kale’s unexpected rise to the top of the leafy green popularity contest: It was just another bitter, underloved vegetable until influential chefs suddenly adopted it as their latest darling, triggering a nationwide kale frenzy that caused kale production to jump 60 percent between 2007 and 2012 alone. 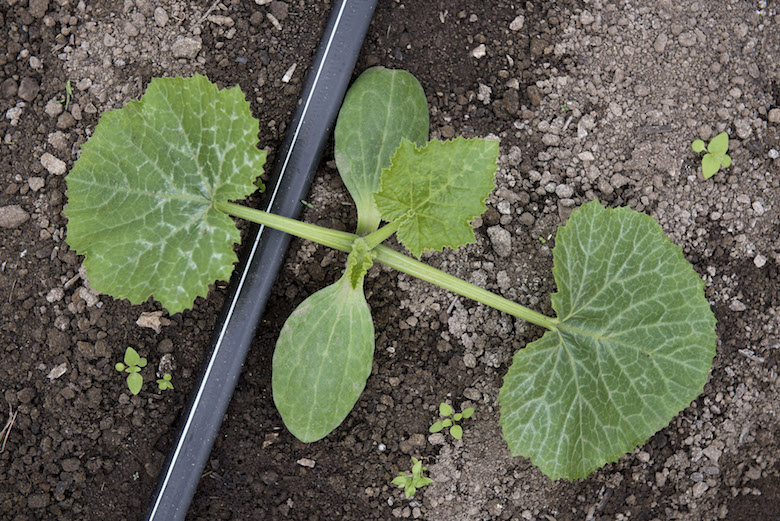 A similar renaissance could happen for these new ingredients, too—if only we demand it through our dining habits and grocery store purchases. As Swegarden points out, “Everything that happens upstream in the food system is dictated by the consumer.” Should a flavor-forward movement take hold, it has the possibility of changing the food system, including potentially creating more jobs for farmers and strengthening the shift toward local, seasonal and minimally processed and doused ingredients. Selman also anticipates that greater availability of delicious, affordable produce would translate into greater consumption of fruits, veggies and grains—and thus hopefully to a healthier general public. “I don’t do this because I want to hang out with high-end chefs,” she says. “It’s about joy and justice.”