Is Canning the New Secret Weapon of New York Wine?

Over the last two years, more than half a dozen New York wineries and counting have added the tsss-crunch-POP! of aluminum can packaging to their bevy of bottles. 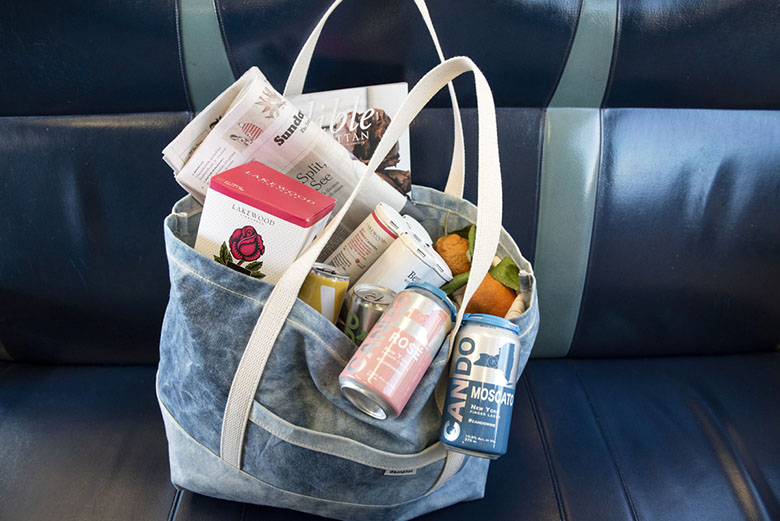 Russell Hearn gratefully settled into his seat on the North Fork–bound Hampton Jitney—the last bus out of Manhattan on a balmy mid-July evening in 2018. After a long day of presenting his Lieb and Bridge Lane wines to accounts in the city, the winemaker was spent. As he waited for the bus to lurch forward and eastbound, a woman slid into the seat across the aisle from him: middle-aged, dressed in perfect seal-the-deal business attire, a Gucci bag plunked down on the seat beside her. In his peripheral vision, he saw her reach a manicured hand into the depths of the Italian leather. A flash of pink caught his eye and, to his total surprise and utter glee, she revealed the last thing he expected to see on the bus that night: a shiny can of Hearn’s very own Bridge Lane rosé.

“The attendant came around taking tickets and asked her what she was drinking,” remembers Hearn with a smirk. “She said, ‘It’s from a local winery on the North Fork and I love it! It’s so convenient—wine in a can!’”

Over the last two years, more than half a dozen New York wineries and counting have added the tsss-crunch-POP! of aluminum can packaging to their bevy of bottles. But wait, didn’t we just get over corks and embrace screwtops, like, yesterday? Aren’t cans kind of a risky business to leap into for the small, some might say struggling, New York wine regions? Are drinkers really and truly ready for local wine in a can? Fast as you can grab a four-pack, the speedy, sippy answer is yes. 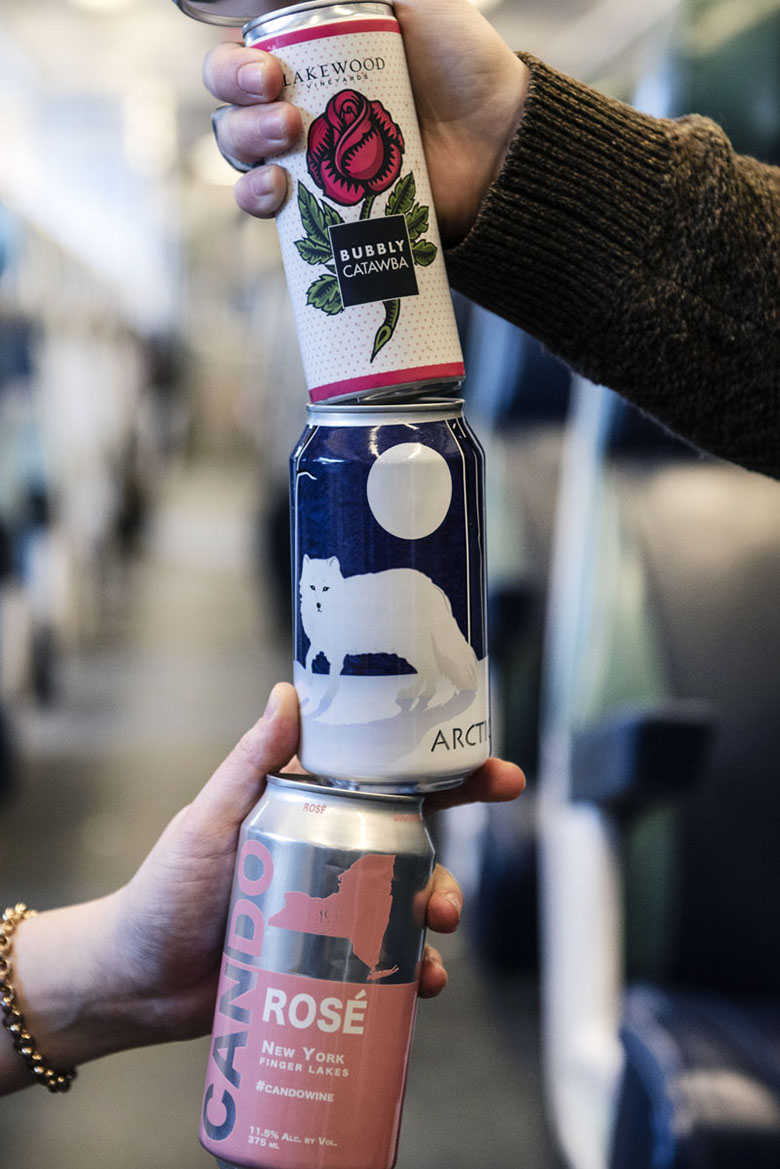 The concept of wine in cans, of course, is not new; it’s been over 20 years since Aussie’s Steve Barics and Greg Stokes of Barokes Wines began tinkering with selling antipodean juice in can, apparently inspired by a broken glass in a spa.

“I had been doing my research of what other producers were doing, and thought, ‘We should do this!’” says Matthew Spaccarelli, winemaker for Benmarl Winery in the Hudson Valley. Like Hearn, Spaccarelli had success transitioning from cork to screwcap for both his whites and reds, and he suspected that canning would glean the same response. He launched the line in summer 2018 with their unoaked chardonnay, a semi-dry Riesling, and their popular Slate Hill red blend. This year, they’re adding a dry rosé and considering a bubbly version of the chard. “It was actually a great talking point for our wines, whose style is fresh and aromatic.”

Have Flip-Top, Will Travel 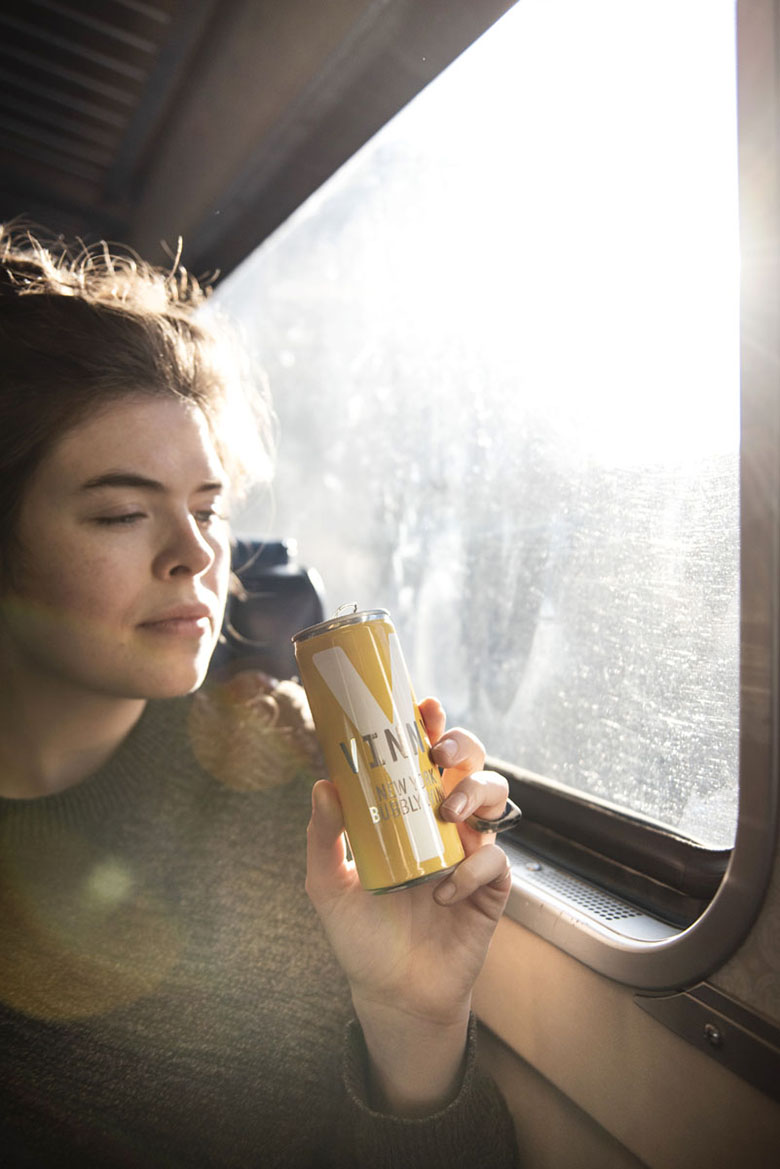 Last July, Thomas Pastuszak launched VINNY (the vin is for wine; the ny for New York), a bubbly, cracker-dry blend of Riesling and grüner veltliner that comes in a slim, buttercup-yellow 250-milliliter can.

“Even though it was the supposed end of the season, we pretty much sold out,” says Scott Osborn, who launched 125 cases of canned wine from his Fox Run Vineyards on Seneca Lake last September. “There are situations where people want to drink wine but they can’t because glass is not allowed, or convenient, or is too heavy.” Osborn and other winery owners like him also find that the packaging doesn’t imply a dip in quality. “I also believe that people who like to drink good wine will still drink that wine if it’s presented to them in a package so they can do it anywhere.” He and his winemaker, Peter Bell, are gearing up to double production of their fresh, lively unoaked chardonnay, semi-dry Riesling and hybrid white blend, Arctic Fox, in early spring this year.

The concept of wine in cans, of course, is not new; it’s been over 20 years since Aussie’s Steve Barics and Greg Stokes of Barokes Wines began tinkering with selling antipodean juice in can, apparently inspired by a broken glass in a spa. And in the early aughts, Francis Ford Coppola’s slim-and-straw-bound Sofia line launched with a bubbly blancs de blanc. For big, well-funded West Coast wineries like Coppola or Gallo, taking a chance on a can plan makes obvious sense, aiming more at quaffable convenience than a memorable oenophile experience.

On paper, perhaps, the notion of petite producers in little-known wine-producing places like Spaccarelli in the Hudson Valley or Coyote Moon Vineyards way up in the Thousand Island region (the first to try out wine in cans in New York in 2016) bellying up to this burgeoning part of the business might seem misdirected. But not only is wine in can a growing sector of the wine world (according to Nielsen, canned wine saw a hefty near 50 percent growth spurt last year), New York producers who have given it a go had such a resoundingly positive reception, nearly all have at least doubled production in their second year. 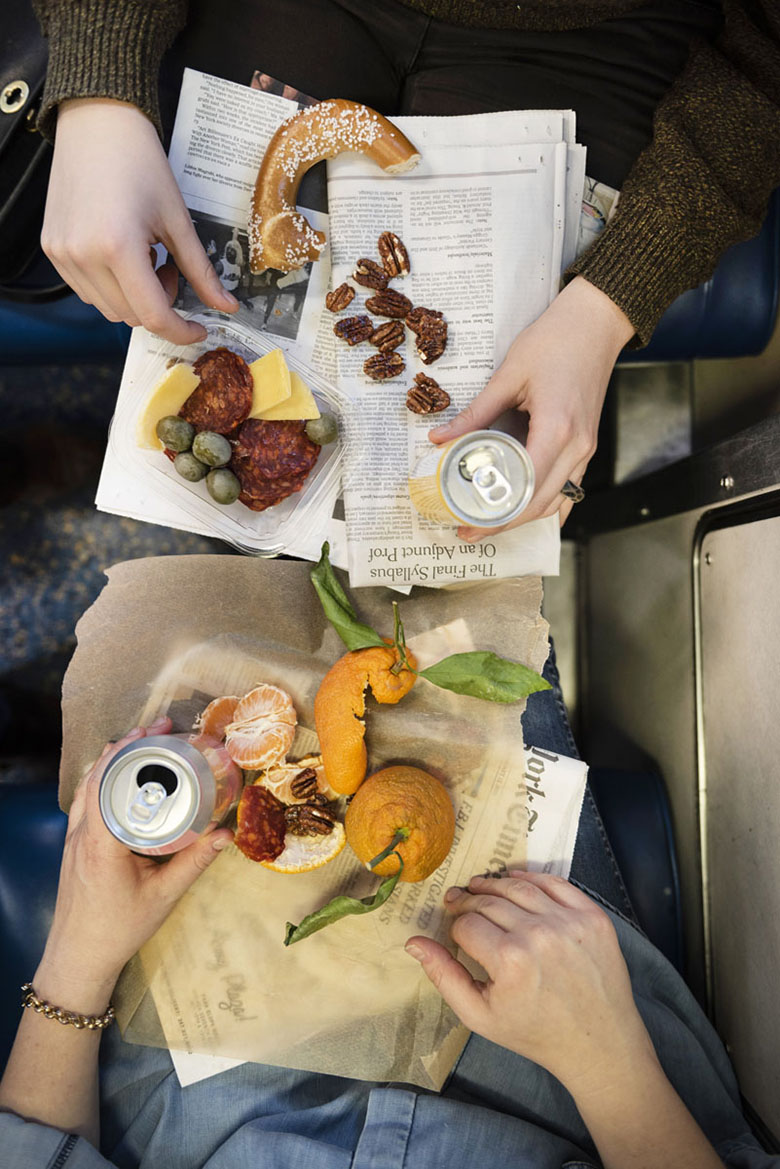 Unlike the path of millennial pet-nat nerds or silver-haired Burgundy collectors, fans aren’t a particular vintage themselves. It’s both and everyone in between.

Hearn has been the state’s best success story. He released his initial batch of all five wines under the Bridge Lane label in 2017. They sold out so quickly, he produced 10 times the amount the following summer. In 2019, he will ramp up that amount three times more, in part to sate new markets out of state that have caught to the boon of both its high quality and high portability.

“We’ve done three rounds since our initial launch, and increased production each time,” says Kris Kane of 21 Brix, a winery in the Lake Erie region, whose dry rosé has been particularly popular. “It really snowballed. Also, I thought it would be just younger people who’d be accepting of new packaging, but it’s all over the place.”

Unlike the path of millennial pet-nat nerds or silver-haired Burgundy collectors, fans aren’t a particular vintage themselves. It’s both and everyone in between. This includes a crossover into craft beer devotees finding a new interest in wine, simply because it’s being presented to them in places where they normally reach for an IPA, like Staten Island’s Flagship Brewery, which sells Bridge Lane wines in can. 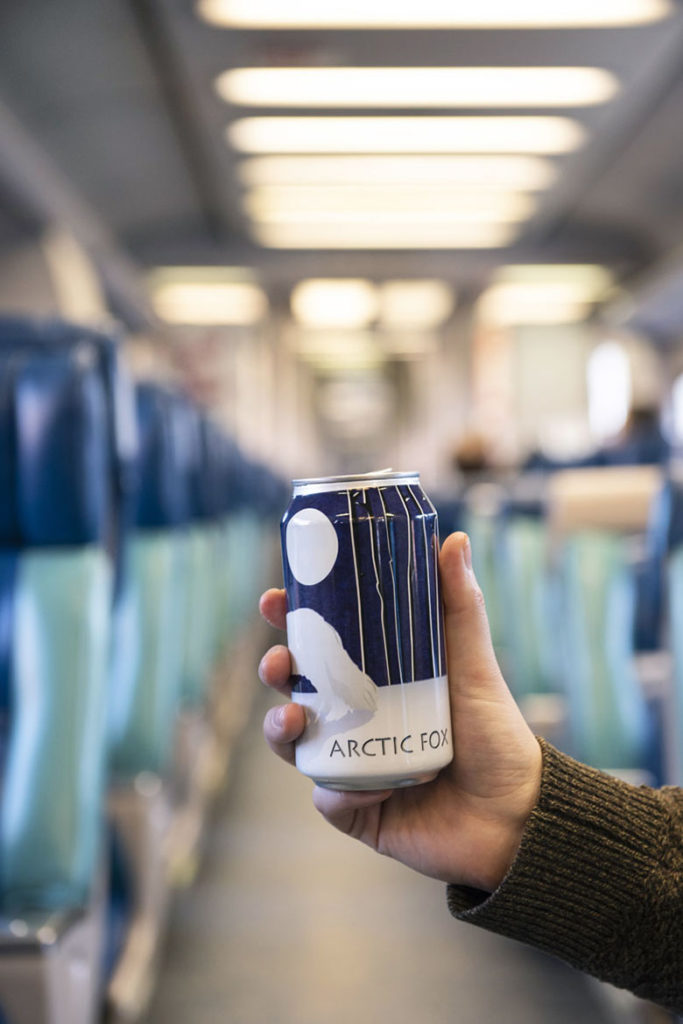 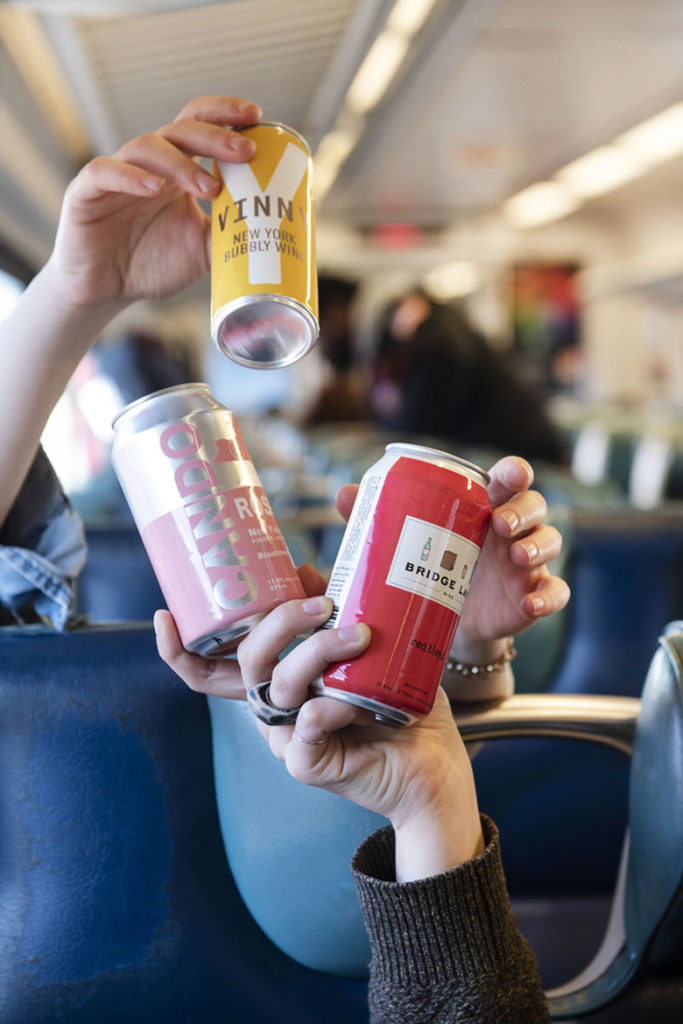 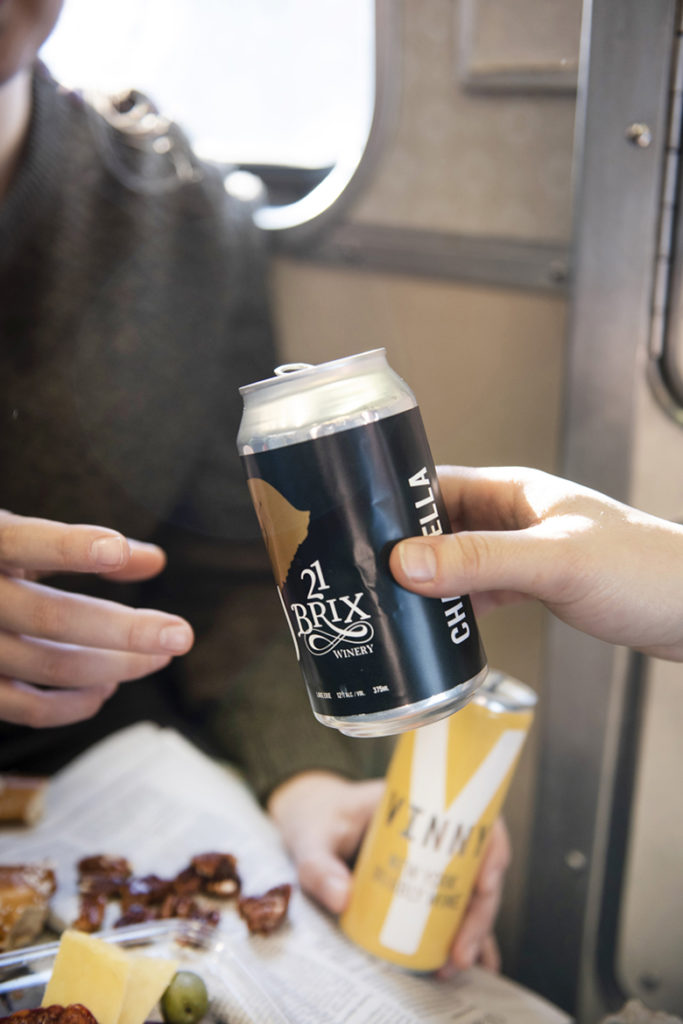 “They taste it, they like it, and then ask more about it. We’ve gotten into a number of local farm breweries,” says Bellangelo Winery owner Christopher Missick in Dundee, New York, who launched under the name Can-Do in June 2017, and sold out of his initial 250 cases in a month. Missick’s line now includes his popular moscato, a blend of Riesling and Traminette called Patriot, and an all-hybrid grape rosé.

Hybrid grapes are a cross between two different species—typically, European Vitis vinifera (think merlot or Riesling) and vines that are native to the United States, favored by some producers for their ability to withstand maladies, like frosty climates and certain vine pests. The rep of hybrids, though, has been an uphill battle at best—but the casual, disarming nature of can packaging seems to encourage a curiosity over sniffy judgment. “People find they like it and then they ask what’s in it,” says Missick.

“In 2017, you really started to see an uptick in quality wine producers putting wine in can. It was a gut-check moment for me. Wine in can is legit!” says Thomas Pastuszak, the superstar wine director of NoMad and a Finger Lakes native who has been making wine on the side with FLX grapes via his two labels, Terrassen and Empire Estate, since 2013. Last July, he launched VINNY (the vin is for wine; the ny for New York), a bubbly, cracker-dry blend of Riesling and grüner veltliner that comes in a slim, buttercup-yellow 250-milliliter can. “It’s targeting certain people who want to drink wine where bottles can’t go.” 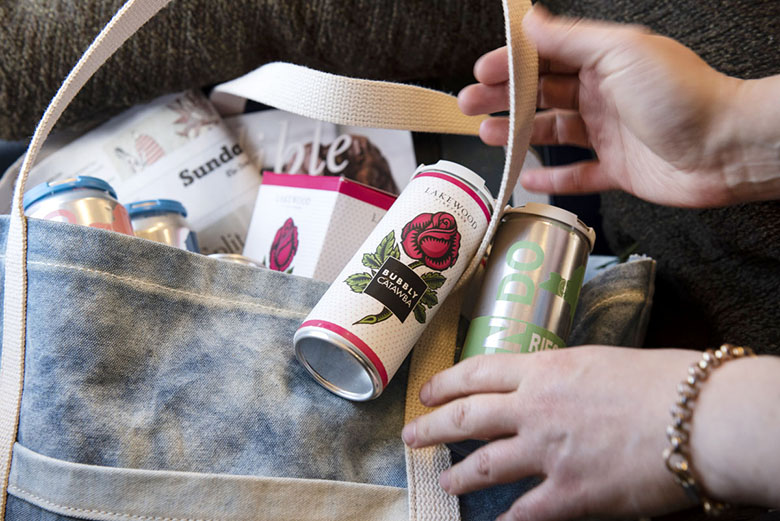 “In 2017, you really started to see an uptick in quality wine producers putting wine in can. It was a gut-check moment for me. Wine in can is legit!” says Thomas Pastuszak, the superstar wine director of NoMad.

“For the casual wine drinker who wants a glass of bubbly while cooking on a Wednesday night but doesn’t want to commit to an entire bottle, cans provide an opportunity. It presents the product the way it’s meant to be every time, and there’s less waste,” says Ben Stamp of Lakewood Vineyards in the Fingers Lakes. Lakewood’s off-dry Bubbly Catawba, with its cool, old-school tattoo-like illustration of a rose on the can, launched last summer and was in demand well into the celebratory holiday season. This year, Stamp and his dad, Chris, will add a dry-style, force-carbonated Cayuga-based wine called Candeo. Both sell for around an easy $16 a four-pack—a bottle of wine for under 20 bucks. “There’s a lot of competition in the canned wine market from huge producers,” says Chris, “but we have a neat little market here that’s thriving.”

And if you crack it open on, say, a long bus ride home, all the better.