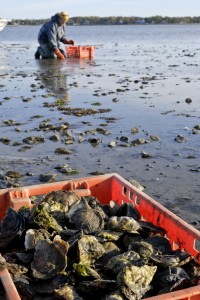 Oysters at the source.

Last week we downed 28 glasses from around the globe in the quest for the perfect oyster wine to pair with the mountains of bivalves that’ll be shucked and slurped at tomorrow’s annual shucking competition and “oyster frenzy” at Grand Central Oyster Bar. The winner was the Chateau de Campuget “Cuvee Prestige” Voignier 2010 from The Rhone wine region in France. (We had intended to throw our nod to a local quaff, but unfortunately our samples were sipped blind.) If you think that sounds tough, rest-assured the task was ever more arduous: We had to taste each of those samples against both a West Coast and and East Coast oyster. Tough duties indeed.

What was interesting was not which type of wines tasted best with oysters–since we didn’t know what we were drinking, we really couldn’t tell–but how in many cases the briny, salty tang of the oyster improved every sip, rather than the other way ’round.

You can test it out yourself tomorrow, when eight different bivalves from both coasts will be in plentiful supply from noon till the Bar closes, along with six wines in total from the pack we sampled (there’s also beer, natch). There’ll be demos from chefs, tastings, a ”Slurp Off,” eating contest, a “beer shucking” showdown and the Professional Shucking Championships co-sponsored by Blue Island Shellfish Farms–the winner scores $3,000, and one presumes, at least one glass of wine.