“This place isn’t exclusive. From the beginning, we always said that we wanted to be the neighborhood cocktail bar.” 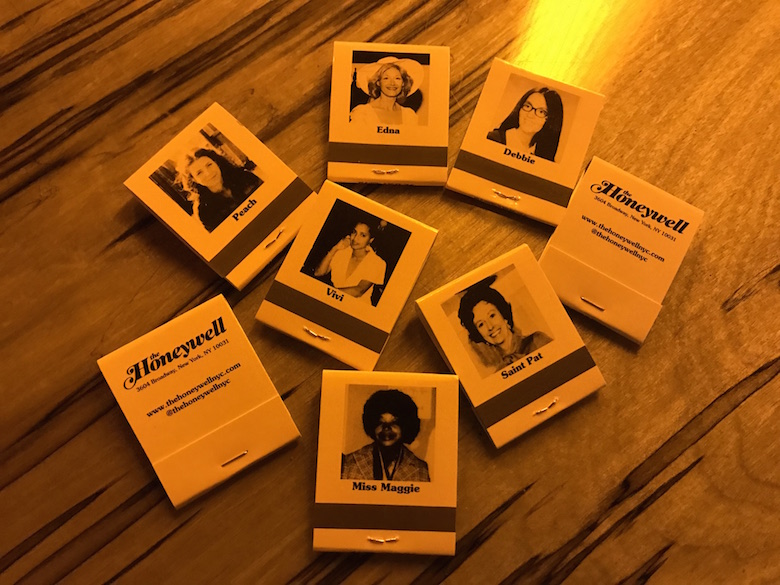 At the end of your visit, be sure to snag one of their keepsake matchbooks. Each features a striking photo of one of the owners’ or bartenders’ moms. Photos courtesy The Honeywell.

Early this year, Maggie Burnett — lovingly known as Ms. Maggie — was staying at Isabella Geriatric Center in Washington Heights. She was coping with a serious health condition that led to the removal of her leg. During that time, Lauren Brie Lynch, co-owner of The Honeywell, and her pitbull, Ladycakes, visited Ms. Maggie every few days.

Ms. Maggie, who lived in Harlem since she was 15, is known as a community icon who fought for and nurtured a neighborhood garden bearing her name. Nestled on the south side of 149th Street and around the corner from the Honeywell, Maggie’s Garden flourishes with tomatoes, collard greens, spearmint and okra (just to name a few); it’s a gathering place for bridal showers, children’s birthdays and block parties. Six years ago, before Lynch’s dad passed away, she met Ms. Maggie while walking around the neighborhood.

“When my dad was sick and staying with me, he would sit with Maggie at the garden,” Lynch, who also opened the neighborhood bars known as Harlem Public and At the Wallace around that time, said. “From the beginning, she’s always looked out for us; she’s always supported us.”

In January, two weeks before the Honeywell opened to the public, Lynch brought a rendering of an orange-colored matchbook showcasing a gorgeous photo of Ms. Maggie in her younger years. Lynch hung the photo of the matchbook, which would later be gifts for the new bar’s patrons, on a wall in Ms. Maggie’s hospital room. “She told me she was going to get out and run the Honeywell with Ladycakes,” Lynch recounts.

On January 15th, Ms. Maggie passed away, but her resilient spirit still lives on in Harlem.

Rest In Peace Miss Maggie. I am going to miss seeing you at the garden and giving you some sugar. Thanks for always having my back. And letting me run wild when no one was looking 🐾❤️🐾 #maggiesgarden #hamiltonheights #westharlem #nyrp #lovehasnolimits❤ #pitbullsofinstagram #pitbulls #ladycakes

“Being accepted by longtime residents was crucial for us, because we wanted to be part of the amazing fabric that is this neighborhood,” says Lynch, who co-founded the Honeywell with partners Jay Janawsky and Chad Vigneulle. “It is a continuing effort on our part, but with Maggie accepting and supporting us, we felt we were doing something right.”

During one of my first visits to the Honeywell, I immediately felt a sense of communal love. After my fiancé, Colton, and I walked down the stairs and into the basement bar, we were greeted by the friendly hostess. Inside, it’s a cozy, dimly lit space decked out with wood paneling and retro Art Deco wallpaper, cushiony booths and Lazy Susans atop tables. The kitchen’s homey swing-door entrance, cabinets and wallpaper looks like a page from a 1960s Sears catalogue. Behind the bar, there are glass bongs and custom-made lava lamp glasses lined up for specialty cocktails.

Colton and I moseyed toward the bar and sat next to a Latinx couple in their 50s. Diagonal from us sat a group of girlfriends in their 30s staring at Marcio Ramos — the dapper head bartender sporting a paisley button-up and feather-accented brown hat — in wonderment. Watching Ramos ignite fire to torch cocoa butter for the Disco Inferno cocktail, I, too, was mesmerized. The finesse and precision he expresses through his craft is poetic.

“I want to encourage people to get out of their comfort zone when they order drinks,” Ramos says while explaining his creative process. “Instead of ordering a gin and tonic, maybe they’ll want to try something different here…like the Wallflower.”

I ordered an off-the-menu lava lamp drink (a cocktail that’s literally lit) containing a mixture of dry vermouth, pisco, velvet falernum, citric acid and tonic water. Then, an African-American gentleman, maybe in his late 60s, walked in with large balloons in hand. He strolled to the back of the bar and met up with his party. Five minutes later, a confident woman with stunning salt-and-pepper hair made her way to the back as well. Seconds later, we heard the crowd yell, “Happy birthday!” in unison.

“There’s nothing better than having old-time residents of this neighborhood walk down these steps because they hear a ’70s disco jam, and they’re in awe. It’s like they transcended back in time,” Lynch says, while telling me about the most rewarding part of opening the Honeywell.

In everything from the black-and-white TV playing old game shows to the vintage candy cigarettes accompanying the check, Honeywell’s spirit is nostalgic. Drinking booze here feels rebellious because the bar throws you back to when you were 17 and visiting your grandparents (except you can legally drink now). Unlike other cocktail bars I’ve visited in the city, nothing here feels pretentious or forced. While there, you get the sense that you’ve stumbled upon a neighborhood gem, and somehow, you’ve suddenly become a member of a cool, unrivaled club. Bonus: You’re not required to subscribe to anyone’s bullshit elitism while there, either.

“I love going to cocktail bars where I feel comfortable and where the bartender talks to me and I can go in my yoga clothes and it’s fine,” Lynch says while laughing. “That’s what we were going for with the Honeywell.”

Neighborhood locals, newcomers and tourists mingle during the daily happy hour. From 5 to 8 p.m., you can get a “classic” or “bougie” cocktail for $9, glass of wine for $5, or subtract a dollar from any beer (Colt 45s are $4 a pop). The Deviled Eggs — made with just the right amount of tang — are $1 each.

The Honeywell’s owners want to create an inviting space for the community, similar to what Ms. Maggie did with the thriving garden.

“We wanted prices that are attainable for everybody, whether it’s a college student, a struggling artist or a longtime resident. This place isn’t exclusive,” Lynch shared. “From the beginning, we always said that we wanted to be the neighborhood cocktail bar.”

Thanks to the budget-friendly happy hour, you’ll have extra cash to spend on the house-made Chex Mix or the whiskey-raised pork belly sliders topped with a fried quail egg and served on scrumptious brioche; both are a savory dream.

The bar hosts events like Drag Brunch and 1970s-themed dance parties for Harlemites and those willing to commute beyond their neighborhoods. Right now, they are partnering with CraftJam, a NYC-based creative workshop, to create happy hours for patrons who want to learn to crochet, knit and embroider while sipping on drinks like a Miss M, which contains mezcal, gin, hibiscus syrup and soda (an homage to Miss Maggie).

At the end of your visit, be sure to snag one of their keepsake matchbooks. Each features a striking photo of one of the owners’ or bartenders’ moms. And of course, there are the ones showing off the legendary Miss Maggie. Her fire, so to speak, and love is being lit by people who treasure the community she helped foster. While there, you can sense Miss Maggie’s soul traveling through the Honeywell’s inclusive and nostalgic vibe. She did, after all, promise to run the place.