Collective members have a particular drive to know their region, its products and its producers. 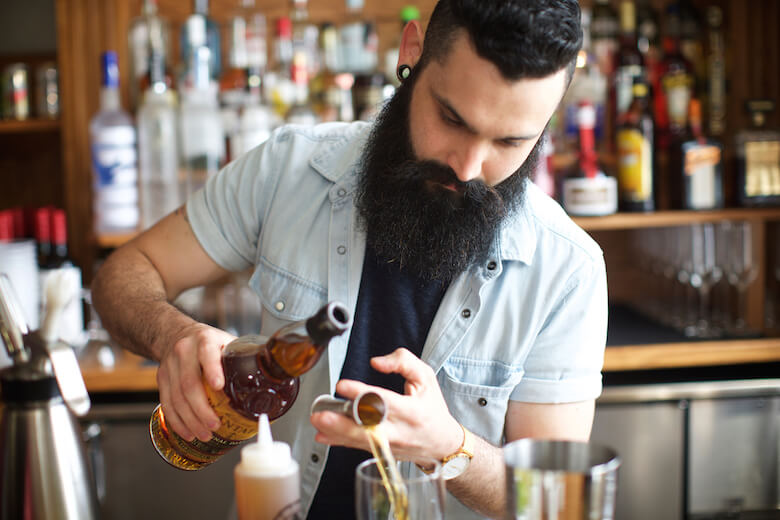 A regional collaboration between Edible Manhattan and New York bartenders, the Collective isn’t out to make a blazing neon name for itself. Collective members don’t hold splashy public events. What they do is learn together, support each other, get to know New York State’s products and possibilities, and—a challenge, for those members working twelve-hour-shifts in New York City—tune their work to the seasons.

Collective members have a particular drive to know their region, its products and its producers. Seasonality was at the forefront of the recent Fall Cocktail Workshop. Collective ambassador Ryan Herzog; Alan Ruesga-Pelayo, a member of Mettā‘s bartending team; and Pier A’s bar and kitchen teams turned a bar and tables into a celebration of autumn flavors. Small dishes held walnuts, cinnamon, pomegranate seeds, overlapping mandolin-slices of apple, dried cranberries, sage leaves, a pool of balsamic vinegar… Fall fell early in Pier A, and it was welcome.

Pier A’s sous chef, Chervin Domond, talked about the flavors of the foods he’d prepared: grilled cheddar and pear sandwiches drizzled with a port reduction, tiny chickpea and green apple tarts with goat’s milk cheese and a pomegranate glaze; Gorgonzola-stuffed figs with walnuts; duck confit and wild mushroom crostini with dried cranberries and sage. Filled with complements and contrasts, these autumn-forward dishes included ingredients all the bartenders would get to use in creating cocktails. A gracious host, Domond offered to fry sage leaves, giving cocktail creators a crisp fall texture to use in their drinks. The bartenders gave that a unanimous, “Yes, please and thank you.”

As attendees—among them Raines Law Room‘s David Powell, Dear Irving‘s Thomas Spaeth, Analogue‘s Carter Wilsford and Seamstress‘ Taylor Adorno—ate, Ruesga-Pelayo talked about Mettā’s zero-waste goals (including developing a substitute for citrus in cocktails, so that every component can be purchased locally) and techniques for incorporating seasonal flavors into cocktails.

At Mettā, the kitchen and bar hold joint meetings. The chef talks about what’s available in the market. Then comes the challenge: the kitchen will use this part and that part; the bar will have to use what’s left. It’s obvious that Ruesga-Pelayo is enjoying having his creative borders expanded—and that Mettā’s philosophy has become his own. Behind the bar at Pier A, he said, “With this seminar, maybe we can help open other minds.”

Bringing culinary methods to the bar, Ruesga-Pelayo talked about ways to preserve the season: dehydration, vinegars and shrubs. His tricks included using an ISI Cream Profi canister to quickly infuse rum with New York apples. (Hint: use two cartridges.) Ruesga-Pelayo’s first cocktail included rum infused with apple, black pepper, vanilla, and Mexican cinnamon; grenadine he’d made himself, from the juicing of pomegranate seeds through seasoning and cooking; house-made orange syrup (using both zest and pith, of course), lemon, Angostura, a pinch of salt, and, instead of egg whites—because he couldn’t use every part of an egg—aquafaba. The liquid from chickpeas gave the cocktail the kind of creamy texture egg whites would confer, but without the waste.

Mettā’ is still taking steps toward buying only local products and wasting nothing—aren’t we all?

The bartenders were inspired. Before getting behind the bar and creating cocktails, they wanted to smell and taste the apple infusion, the grenadine, the fig balsamic reduction, and everything ingredient Ruesga-Pelayo had crafted and made. Of course, he let them. That’s what the Collective is all about.