Dusting the USDA Certified State Soil from our Toes 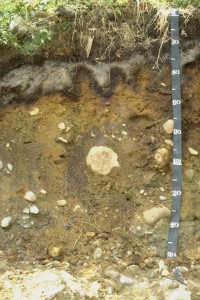 Yesterday we hit two of our favorite summer outdoor spaces in which to hang: First to breezy Governor’s Island to sample the hearty handiwork at Meatopia, and then on over to Brooklyn’s Williamsburg Waterfront for one of the many rock shows held in East River State Park. Both spaces left our sandal-covered feet more than a little dust-covered, and that reminded us of something we learned at a wine tasting a few weeks back: We’ve got an Official New York State Soil, called Honeyoe.

Now we were well familiar with state birds and trees and flowers, but the fact that dirt could be crowned with a title too was something we were unaware of until we went to tasting of Oregon Certified Sustainable Wines at Frankies’ Spuntino. The pourers were all Oregon state winemakers who were working to create a new classification for the wines they produce, ones made without many chemicals and with the care of the land and yes, the soil in mind.

One of those winemakers was Ronnie Lacroute, from WillaKenzie Estate. Her pinot gris was fantastic, but the most amazing thing she told us about its creation was that the name WillaKenzie wasn’t a mishmash of her kids’ first names, as we suspected, but the name of the State Soil from the region where her grapes were grown and crushed. It turns, out, Ronnie told us, that the US Department of Agriculture’s Natural Resources Conservation Service selects soils for each state that are both unique and representative of that region.

The USDA-NCRS has even written up in-depth profiles of one from each state, as well as soil surveys from several counties within our state. (Sadly none of the city’s have yet made it online.) Honeyoe soils, which are found on about 500,000 acres within the state, earn their name from an Iroquois Indian word “hay-e-a-yeah.”

According to the USDA, the story is that a Seneca brave was bitten by a rattlesnake, cut off the finger, and later on referred to the place  where it happened as “where the finger lies,” or hay-e-a-yeah. Though apparently Honeyoe is better for apples and soybeans than grapes.