Bake Your Cocktails for a Sweet New Experience

What do cupcakes have to do with booze? Everything. 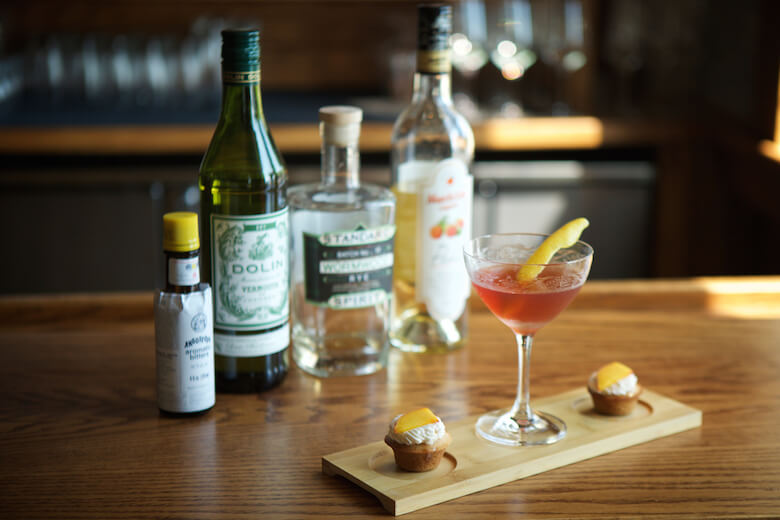 What do cupcakes have to do with booze?  Everything.

Between working at Little Branch and founding the Cocktail Parlor, Courtney McKamey has developed a deep (and deeply unusual) knowledge of cocktails. She serves them neat, up, on the rocks and as pastries.

At the Pier One Harbor House, McKamey gave Edible Collective members insights into the creation of boozy cupcakes. The drink on the menu was also in the cupcakes, and the cupcakes (McKamey promised) had a kick.

The Sunset Park has close kin in cocktail history. Madrusan’s drink is is a dark spin on the Frank’s Special, a cocktail found in Trader Vic’s Bartender’s Guide, which was published in 1948. That drink had brandy, gin, and a dash of peach brandy.

McKamey chose the Sunset Park for all sorts of reasons, but a key asset is that peaches and apricots are equally acceptable. That frees bakers and bartenders to choose the freshest fruit.

Bartenders sipped and nibbled Sunset Parks, and questions flowed. Was it only the buttercream that was boozy, or did the cupcakes hold liquor, as well? Both, McKamey said. These were not child-appropriate cakes.

There was a pause while bartenders ran silent numbers. Water evaporates at 212 degrees Fahrenheit. Alcohol evaporates at 174 degrees. Cupcakes get baked at—what? 350 degrees? How could there be any alcohol left?

If you want to create high-spirited cupcakes, get ready to test a lot of dough.  The results are buttery, boozy, and rewarding. Just ask a Collective bartender … if you can get one to stop scarfing down cupcakes long enough to talk.