At HALL, World Class Cocktails Are Served in a Chic Gilded Vestibule 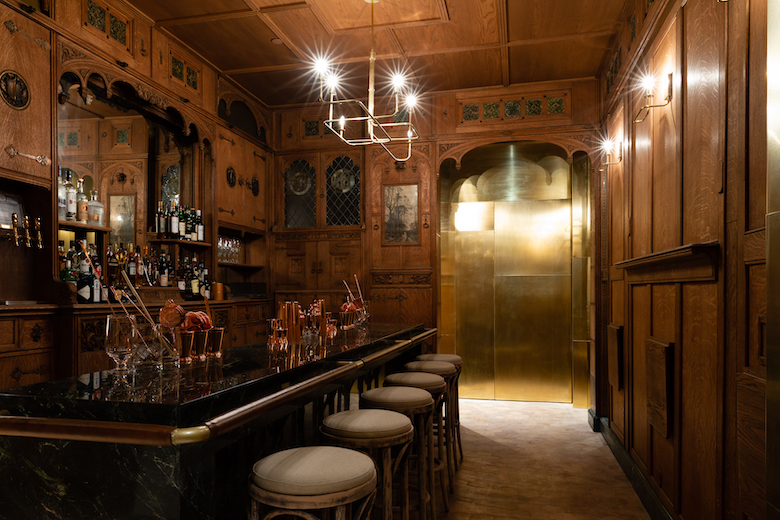 There was a time in New York City when modern speakeasies were cool, the novelty not yet worn off. But like most shiny things, the concept has lost its proverbial luster, and now we’re left with an oversaturated market of dwindling originality and muddied purpose. I was beginning to think that the speakeasy of today was long past its prime until I made my way 17 West 20th Street. This story, however, is much less about the main attraction than it is about its opening act.

Initially, I walked right past my destination, which was a good start (the scaffolding and partially drawn shutter over the door threw me off. Well played.) Inside, standing between me and a gilded wall leading to chef Hiroki Odo’s hidden 14-seat kaiseki counter, was a small room about the size of what I imagine a rich person’s Manhattan walk-in closet to be. Outfitted in antique wood cabinetry and a proportionally tiny green marble-topped bar, HALL is an architectural work of art, its drinks and dishes no less inspiring than their surroundings.

By day, HALL serves as a café and casual eatery, transforming at night into a speakeasy of its own. I took a seat at a small table jutting from the wall, opposite the bar and with a front-row seat to o.d.o’s unmarked door––a perfect vantage point for each order’s journey to the tables around me and the guests materializing before and after their kaiseki experiences in the back. My own order began with a glass of wine (the list is small yet impressive, like its digs), though I was taken by the cocktail menu and its industrial sketches; my wine order was a creative way of biding my time as I perused it. 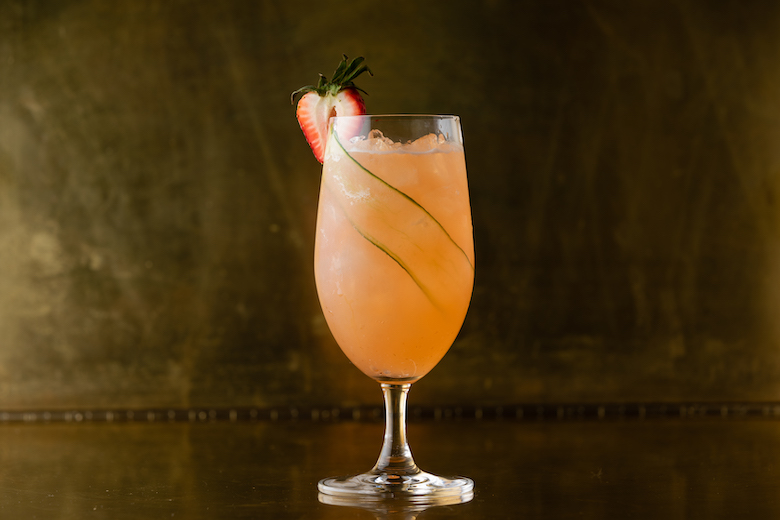 The drinks themselves, according to beverage director Nick Patton, rotate seasonally and are shrouded in mystery, staying true to form. “Each cocktail has a name that has a deeper meaning within the restaurant, only something people ‘in the know’ would understand,” he tells me. “1905” (Jamaican rum, strawberry, cucumber, lime, simple) pays homage to the birth year of the cabinets that surround the space, while “Please Watch Your Head” (Tequila, lime, togarashi syrup, grapefruit, habanero bitters, sparkling wine) is a cheeky reference to the dangerously low arch at o.d.o’s entrance.

The rest of the secrets are a mere question away, best saved for a post-meal nightcap at the bar––an opportunity to earn your bartender’s trust. If you’ve come by on a Monday, you’ll be lucky enough to experience the “secret menu” (Chef Odo’s casual version of the kaiseki menu) with futomaki (traditional and vegetable), three oden sets, several soba options, and an exquisite potato-starch fried Jidori, to name a few highlights. On any other night, opt for one of the burgers––Wagyu, shrimp, and Truffle Deluxe, most notably––paired with an order of fries dusted with truffle salt, a few surprise fried Brussels sprouts mixed in. In any case, be prepared to stay a while––like a shrunken, smokeless casino, time both freezes and passes all too quickly in this enveloping capsule full of wonder.