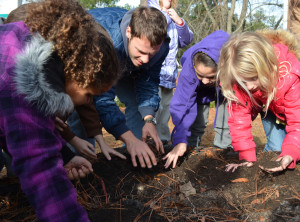 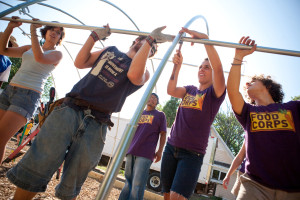 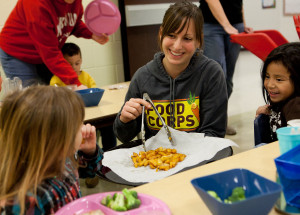 Sweet potatoes are at the top of Sebastian Naskaris’s agenda.

As part of his ongoing effort to get local produce into school cafeterias, the 28-year-old Upper West Side native now living in Moore County, North Carolina—one of the poorest counties in America—serves as solution-wrangling liaison between area farmers and the district’s child nutrition supervisor.

For months he’s been working doggedly to get the crop on the menu, rather than its sticky canned cousin, finessing the tricky jigsaw of commodity suppliers, local growers, so-called kitchens equipped not to cook but merely to “heat and serve,” and a federal system that requires schools to feed each students on less than $2 per day.

If Naskaris sounds like he has his fingers in many pies—including a few made of mud—he’s doing his job right: Part gardener, part public-health champion, part educator, part veggie pusher, part policy advocate and part peacemaker, he’s one of 50 service members deployed across the country currently completing the first year of the revolutionary program called FoodCorps.

Masterminded in Manhattan and modeled on AmeriCorps, FoodCorps’s mission is to quash childhood obesity through an in-school, hands-on approach, one community at a time. To that end, the nonprofit arranges yearlong service stints in public school systems; it launched last year with a call for applications to fill 50 slots nationwide. Although the postings offered an annual stipend of just $15,000—and only hypothetical details about what to expect—a whopping 1,200 people applied. Some were college or culinary-school grads; some had experience in teaching, community organizing or—like Naskaris, who worked for Flying Pigs Farm—agriculture. Most were between 21 and 36, and all were hungry for change.

FoodCorps picked the cream of the crop and set them forth in towns in 10 states, including Mississippi, Michigan, Arizona and Oregon, to get local harvests instead of commodity crops into lunchrooms, to turn forlorn football fields into kid-friendly school gardens and, in nutrition classes, to teach students how to grow and cook kohlrabi rather just memorize the function of vitamin K.

The collaborative project’s partners include Slow Food USA and the National Farm-to-School Network, but its beating heart is in Flatiron, where Curt Ellis (one of the guys behind the Peabody Award–winning 2007 documentary King Corn) and co-founder Jerusha Klemperer’s bunker is an office in the historic Federation of Protestant Welfare Agencies building. Appropriately, the little office is adorned with vintage government posters for something called the School Garden Army.

FoodCorps’ founders had high hopes, but their first year has far exceeded expectations, likely because the project is simultaneously philosophical and practical. “As a nation we know how to reverse childhood obesity and give kids access to healthy food in school,” says Ellis, citing engaging nutrition education, vibrant school gardens and real food for lunch—“we just have to roll up our sleeves and do it.” In all, the 50 innaugural members reached 33,000 kids in 200 schools and built or revitalized 168 gardens.

But Ellis says he’s most proud of the stories that can’t be expressed in numbers: One member wrote to say she’d started a garden club in the school she serves. “I just couldn’t sleep last night,” one of the children told her. “It’s like Christmas.”

Or take Naskaris. After countless hours dashing between local farms, his district’s child-nutrition supervisor, and a school’s food service team, he got those sweet potatoes served in the lunchroom for the first time ever. Before their debut, Naskaris’s gardening and nutrition classes focused on the history and importance of sweet potatoes in North Carolina, and when the spuds finally hit the cafeteria, the kids promptly devoured a whopping 80 percent of the supply. Impressed, the distributor decided to carry the potatoes in six more school districts, a boon to both elementary eaters and area agriculture.

This year, FoodCorps has applied for funding that would double their crew to 100. “Long-term, our goal is to create systemic change,” says National Farm-to-School Network communications director and FoodCorps co-founder Debra Eschemeyer. “We know there’s a need for this and we know it can be done.” Plus, talented applicants are already vying for the spots.

That’s in part because school kids aren’t the only parties to benefit. For inspired advocates aiming to become the next Will Allen or Tom Philpott, FoodCorps is as good as grad school—and likely more gratifying. Naskaris, for his part, is hoping to stay in North Carolina for a second year as a FoodCorps leader, then pursue an MBA, with long-term plans to create a new business model for large-scale sustainable farming. But right now, he’s got to run and meet a class of 12-year-olds. They’re going to make pasta with kale they grew themselves, and Naskaris can’t be late.