Designed more than a century ago, each is a serious workhorse to pare, core and slice apples for 19th-century eaters. 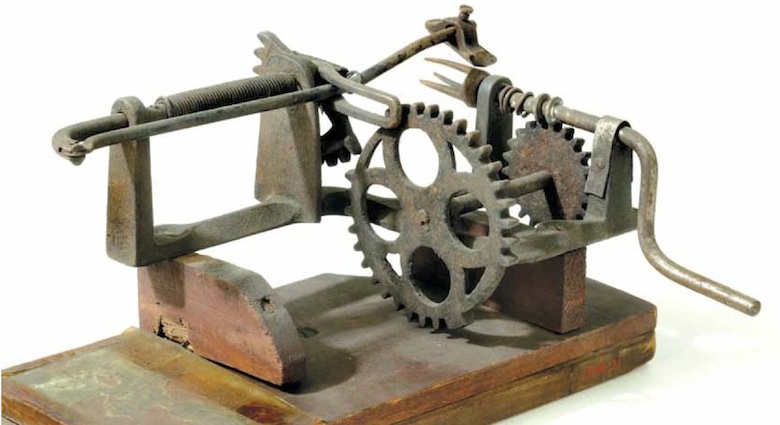 Inside the New York Historical Society, way up on the fourth floor, a display case houses an assortment of odd little machines that look like gadgets your great-grandfather might have played with as a boy—jumbles of wheels, cranks and gears, some threaded with lengths of twine. But these funky instruments aren’t toys.  Designed more than a century ago, each is a serious workhorse to pare, core and slice apples for 19th-century eaters.

The apple was a staff of early American life. Every homeowner grew apple trees, each of which could produce up to two tons of fruit each season, according to an 1892 New York Times article chronicling the prolific local harvest. To extend their bounty, families would put the best-looking apples in the cellar, press blemished fruit into cider (which was a more common quaff than water) and preserve the rest by slicing and stringing them up to dry or by cooking them down into applesauce or apple butter. Peeling, coring and slicing all that fruit took days on end.

Enter the ingenious apple parer. Even the simplest early devices made short work of the fruit: Just poke it onto the prongs, twirl the crank and, within seconds, a spring-loaded peeler strips off long ribbons of rind. The first incarnations appeared in the late 1700s, complete with leather straps to spin the apple and a wooden plank that the operator could sit upon to hold everything steady. Families made their own, and neighbors would share them at apple-paring bees each fall. According to the Historical Society’s documents, young unmarried women would squint at peel scraps in search of their future husbands’ initials. The work went quickly, and hundreds of pounds of the harvest soon were hung to dry or simmered into sweet, sticky preserves.

The Historical Society’s assortment of parers comes from New York businessman Charles Larned Robinson, who in the 1940s donated his collection of more than two-dozen devices. Along with butter churns, sewing machines and other household tools, the apple parers are on permanent display on the fourth-floor Henry Luce III Center for the Study of American Culture.

“They’re really elegant in their simplicity,” says Schmidt Bach.  “I think understanding the evolution of kitchen tools that we have now is important to our understanding of where food comes from.”