Kopi Kopi is “a portal to Indonesia,” complete with coffee, specialty drinks and snacks. 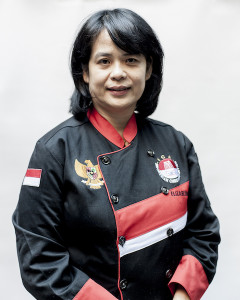 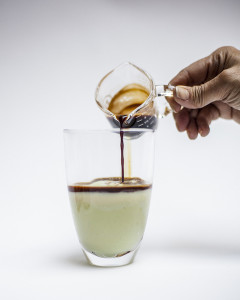 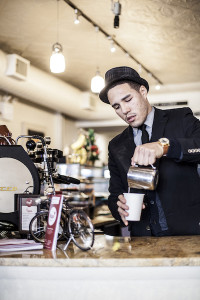 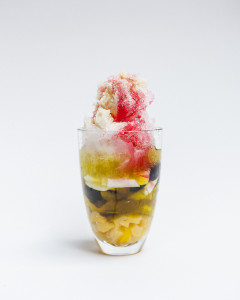 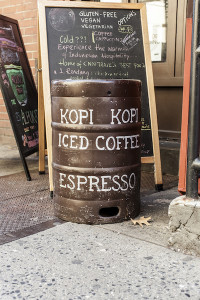 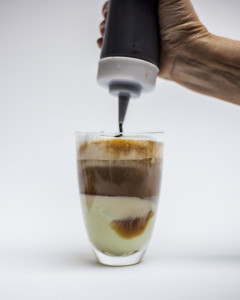 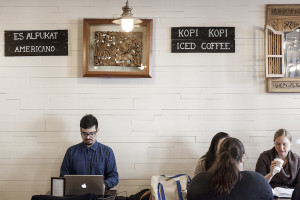 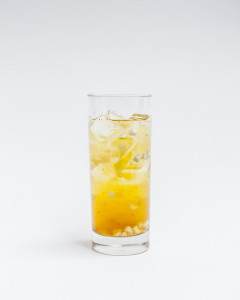 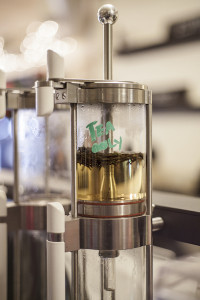 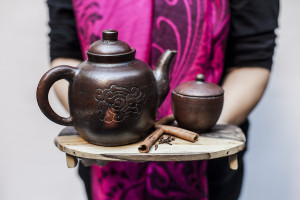 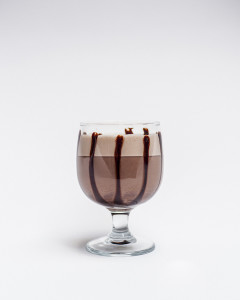 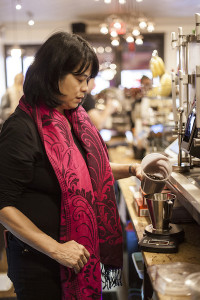 In 2010, when Liz Lapadula was as an environmental and intellectual property attorney with a big Midtown firm, she was anything but a coffee geek.

“Most of the time I only drank half a cup a day,” she recalls, adding that she took it with milk and sugar.

But on a trip to Jakarta — the capital of Indonesia, where Lapadula grew up — her sister insisted she try a new high-end coffee shop featuring locally sourced single-origin varietals. She was floored by the complexity not just of the bean, but of her native country.

Over time, what started out as a desire to learn more about roasts, blends and brewing as they applied to Indonesian terroir — “I’m interested in everything,” says Lapadula, who is also a trained scientist — became an obsession. By April 2013 she had graduated from the American Barista School in Portland, Oregon, and left her firm to open Kopi Kopi, named after the Indonesian word for coffee, a block from Washington Square Park.

Unlike any other coffee shop in the city, Kopi Kopi is focused solely on Indonesian varietals, which are roasted to order for Lapadula in Brooklyn. Directly sourced from smaller growers on the 18,000-plus islands that make up the country (Bali, Sumatra and Java being some of the best-known), those include the chocolatey Java Taman Dadar, from a rare, independently run operation on Indonesia’s biggest island, or sweet beans from the region of Manggarai on the island of Flores.

All can be prepared as espresso or to Lapadula’s precise flavor specifications in her Alpha Dominche Steampunk, an obscure tea- and coffee-brewing machine with clear glass columns that looks and acts like lab equipment. It lets you tinker ad infinitum with temperature, time, volume and agitation cycles.

Unlike any other coffee shop in the city, Kopi Kopi is focused solely on Indonesian varietals, which are roasted to order for Lapadula in Brooklyn.

Yet perfect pour-overs are only the beginning at Kopi Kopi, where the walls are decorated with pieces Lapadula has collected from each coffee-growing region of the country. Lapadula also wants her café to be what she likes to call “a portal to Indonesia,” complete with a full kitchen whose staff was trained with help from her friend Henry Alexie Bloem, the president of Indonesian Chef Association and a judge on “Top Chef” Indonesia. (She’s also tapped her family for help: Two of her four adult children are also certified baristas, and sometimes work the counter.)

At Kopi Kopi, you can now sample Indonesian drinks like the es alpukat, a chilled mug filled with layers of creamy avocado, iced coffee and frothed milk; or bandrek, a hot ginger brew made with cinnamon and cloves. There are snacks like pisang molen, or pastry-dough-wrapped sweets stuffed with bananas, mild cheese and chocolate; wide bowls of soto ayam, a spicy chicken and potato soup dressed with chili sauce and a squeeze of lemon; and classic Indonesian dishes like the beef stew called rendang, or nasi goreng, a version of fried rice served with skewers of chicken satay and peanut sauce.

Indeed, just as Lapadula went full bore into the nuances of coffee, today she’s often tweaking her menu after learning a new technique or tasting a new ingredient, intent on showing the rest of us what she’s rediscovering about Indonesia. Some of her proudest achievements to date, she insists, aren’t her recipes for Balinese chili sauce (by special request only) or her skill with the Alpha Dominche, but the fact she’s convinced more than one customer to visit her former home.

And it’s all thanks to that one cup of coffee, admits Lapadula: “It basically opened my mind.”