Beer Boutique: Top Hops Pours on the Lower East Side

Top Hops, a beautifully modern bar and market, has opened on Orchard Street. 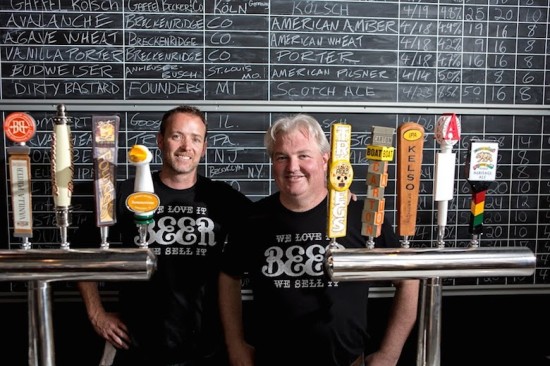 Unlike most city shops devoted to suds, Top Hops is not another dimly lit gastropub or trumped-up bodega stacked with six-packs. Instead, this beautifully modern bar and market—opened by Ted Kenny last year on an up-and-coming block of Orchard Street—is more like a boutique of beer.

Hence the floor-to-ceiling picture windows up front, which allow passersby to ogle the brews—ranging from a rarely seen pint of Amarillo Single Hop Pale Ale made by tiny Hill Farmstead in Vermont to a bottle of the dark-brown strong ale made by ’t Gaverhopke over in Belgium.

Top Hops stocks 700 varieties in cans and bottles, but at the shop’s curvaceous custom-made bar, there are also 20 taps for filling growlers to go or pints to stay. (True beer geeks will appreciate not just the sign noting when those taps were last cleaned, but the fact that Kenny keeps the lights off in his coolers, ensuring the beers aren’t exposed to heat.)

Should you decide to settle in for a few rounds—you can belly up with anything sold in-house—Kenny has also curated a selection of snacks from the Essex Street Market just around the corner: olives from Formaggio Essex, charcuterie from Heritage Meat Shop and artisan American cheese from Saxelby Cheesemongers.

Not that Kenny is a stickler for farmstead fare: Before he opened Top Hops, he spent seven years in marketing and sales with Anheuser-Busch and InBev, repping big-name beers like Stella Artois, Budweiser and Leffe. In fact, the latter two, he says, are always on tap at Top Hops.