Grist for the Mill

Several of the artisans in our annual Drinks issue seem to have another resolution: to party like it’s 1849. 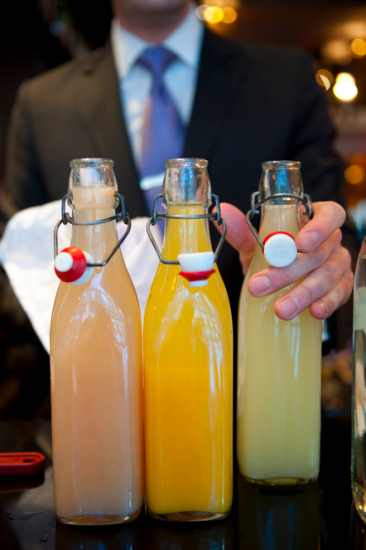 It’s a new year, a time when most of us are focused on the future. But several of the artisans in our annual Drinks issue seem to have another resolution: to party like it’s 1849.

Sure, in an era of molecular mixology, haute bartenders experiment with Cryovacs and xanthan gum. But others are turning to the history books instead, which is why your Instagram feed may contain cocktails not seen since the days of the telegram.

Take Betony, which Esquire just hailed as restaurant of the year. Behind that gleaming new bar, general manager Eamon Rockey painstakingly prepares a milk punch that takes 10 to 12 hours to clarify and can’t be found anywhere else in town. The crystal-clear results look as extraordinary as they taste and can keep, unrefrigerated, for months. No wonder the drink was so popular during the Lincoln administration.

Or consider Coppersea Distillery. A veteran of the information technology field founded this new whiskey business just two years ago, but don’t picture a postmodern climate-controlled facility of cold stainless steel. Instead, every aspect of production—from the custom-crafted rake with which they spread sprouting local grain to the wood fire burning under the copper still—re-creates what owner Angus MacDonald calls “heritage methods.” Indeed, if an 1840s distiller from upstate New York wandered into Coppersea’s facility, a brick building near the Holy Cross Monastery on a bluff above the Hudson River, MacDonald says, “he’d find it familiar.”

Aaron Burr cider is cut from the same hand-woven cloth. Created by a husband and wife who left Brooklyn for life on the land, this revolutionary hard cider resurrects the drink our nation was founded on. And I don’t just mean its use of wild yeasts and antique technique. At the core of the operation is a very different fruit: apples from abandoned trees planted by Hudson Valley homesteaders in the 1800s and long since absorbed into the forest. Unlike the super-sweet varieties developed in the last century, these cider varieties are far too tart for eating out of hand—but the spectacular fermented results quickly landed on the list at Gramercy Tavern, Eataly and Eleven Madison Park. If you can get your hands on a glass, you’ll be transported 200 years back in time.

But don’t stay there long. Because our next issue is all about innovation, and that’s a trip to the future you won’t to miss.