A Cocktail Writer Walks Into a Bar 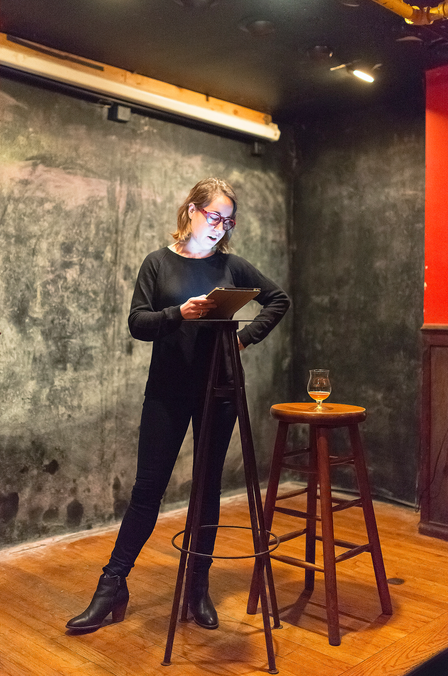 …and the audience follows. At Kara Newman’s Think.Drink events, pros like Talia Baiocchi of Punch magazine read their original works out loud.

The crowd in the back room at Jimmy’s No. 43 is standing room only, guests craning their necks and cupping their ears for a better listen. Judging from the turnout, you’d think this town has been parched for a more spirited spoken word—a place where people who write about drinks for a living can read aloud to their boozy muse.

Drink.Think, which Kara Newman began right here in this East Village room three years ago, has the feel of a beat poetry happening—minus black berets, plus foam-crowned glasses of Belgian ale.

“Appropriately, I thought up the idea at Tales,” laughs Newman, referencing the annual New Orleans cocktail conference for movers who wield shakers. But what about people whose go-to tool is a typewriter?

Newman—who ditched a finance career to become a spirits writer and serves as spirits editor for Wine Enthusiast and authored Spice and Ice and Cocktails for a Crowd—says drinks writers just can’t get no respect.

“Spirits and cocktail writing,” she observes, “doesn’t get a lot of love from the greater food writing establishments.” She recalls thumbing through a copy of the Best Food Writing anthology and seeing no stories about drinks. “I have a very vivid memory of thinking, ‘You know, there really ought to be some kind of event just for beverage writers.’”

Now at Newman’s every-few-months readings, top-shelf writers show up to read. On that snowy December night at Jimmy’s, participants included Boozehound author Jason Wilson; natural wine’s fierce Alice Feiring; Talia Baiocchi of Punch magazine—and some scribes whose writing has appeared in our pages, such as Robert Simonson of the Times. Me, too, tipsy with the thrill of reading aloud among them.

These people make their living from print, but when it comes to sharing stories, there’s one place that beats any magazine: bars. And Newman’s suspicion that her fellow writers had more than Top 10 Bourbon lists up their sleeves was correct. The original stories read aloud at Drink.Think range from humor to heartbreak, all through the slightly fuzzy lens of alcohol: tales of going on the wagon, discovering deep-rooted vines or booze-fueled college buddies who believe they can do anything. Loss, love and liquor, spilling forth from the page.

The readers clearly enjoy it as much as the applauding audience. “As writers, we’re so removed from an audience,” Newman explains. “The most feedback you get is two sentences on a blog.”

Newman has even taken her show on the road to cities like Chicago and San Francisco, greeted by the same enthusiasm she gets at home: a packed house, laughter and tears, and always many glasses raised.