This 25 Year Veteran of the 97th Street Greenmarket Grows 350 Varieties of Produce, and Then Some

For years now, Jeff Bialas of J&A Farm has had one of the most diverse produce stands in the entire Greenmarket system. 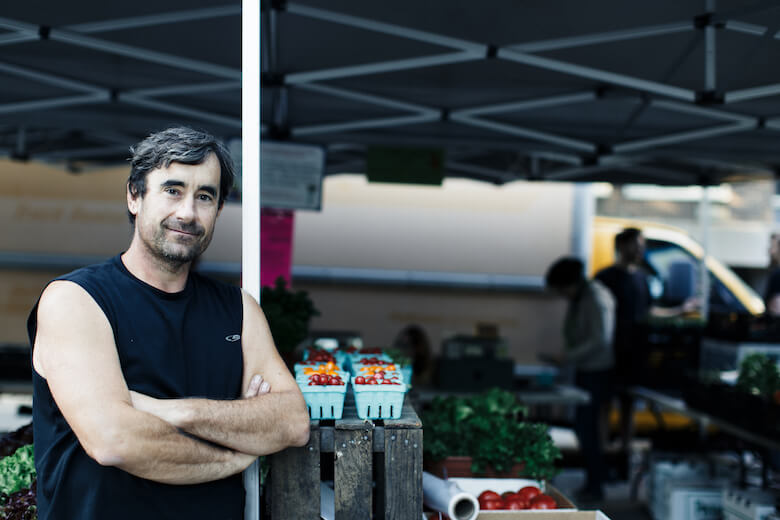 Jeff, as everyone knows him, grows 350 varieties of vegetables, herbs and a few fruits on a mere 14 acres at J&A Farm, near Goshen.

No two farmer stories are alike, but some have more twists and turns than others. Jeff Bialas’s could be a bittersweet rom-com: third-generation farm boy from Orange County comes to the big city to sell vegetables, meets a customer’s Chinese-food-loving daughter and lures her away from pastry cheffing to the country, where complications inevitably ensue. Or it could be an agrarian tutorial: how to start out one February with not even a shovel, let alone a field, to your name and still be back in the Greenmarket by May. Or, as his devoted patrons on West 97th Street would appreciate: a documentary on what could be considered couture farming, meaning the careful cultivation of small quantities of a vast array of produce, all of it with exquisite looks and flavor.

The third story line is definitely compelling. Some competitors have 30 acres planted with tomatoes alone. Jeff, as everyone knows him, grows 350 varieties of vegetables, herbs and a few fruits on a mere 14 acres at J&A Farm, near Goshen. But appearances are deceiving: His compact stand at the Friday market looks like a little jewel box, with small crates heaped with the likes of red okra and striped eggplant and Green Zebra tomatoes, all alluringly displayed. Throughout the morning, though, he and his hired hands from the city keep those boxes constantly replenished from the 16-foot box truck he loads and drives south once a week. He says he serves 1,500 customers a day at this market and one on Saturdays, in Pleasantville. That is a lot of custom produce. 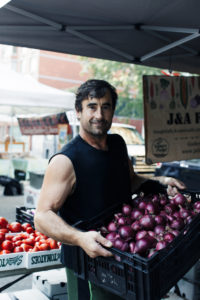 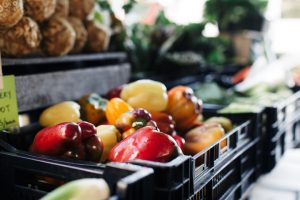 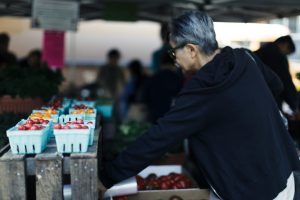 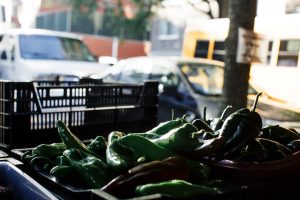 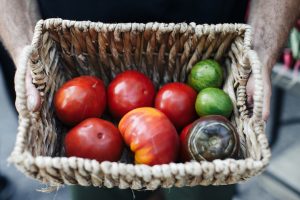 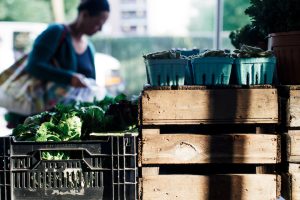 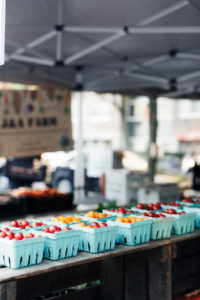 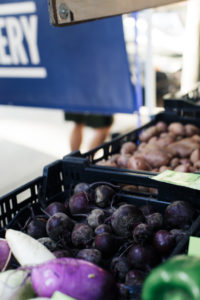 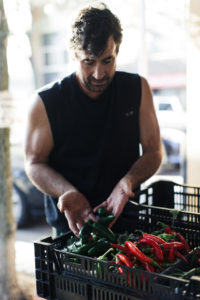 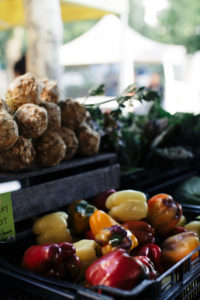 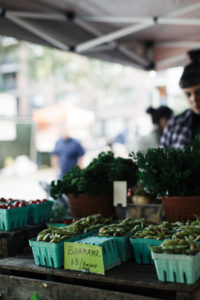 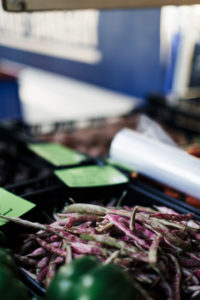 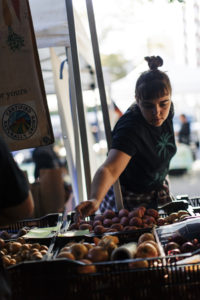 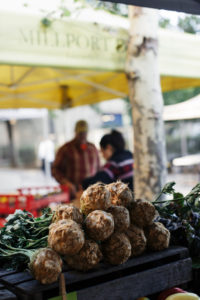 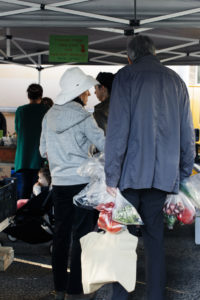 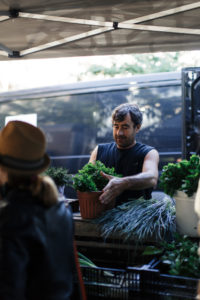 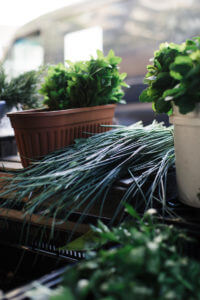 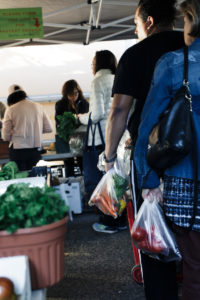 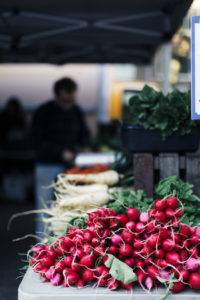 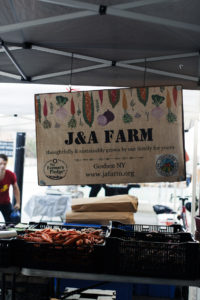 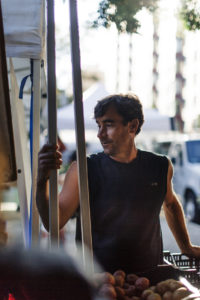 And as long and winding as his story is, since he marked his 25th year in the Greenmarkets in June, it actually represents a straight narrative of farm-to-kitchen vending in general. His family started out in 1939 growing a single crop, first celery and then $1-a-bag onions, until he and his mother saw the potential of vegetables from a truck garden and headed south, to the Greenmarket then on 102nd and Amsterdam Avenue. His bride, Adina Epstein-Bialas, later came up with the idea of a CSA to keep the farm above snow through the winter. And ever since the two broke off on their own in 2010, they have raised their crops organically but not certifiably organically. Adaptation has always been central to Greenmarket success.

The Bialases can boast that “the Obamas ate our purslane,” but they no longer supply restaurants like Blue Hill at Stone Barns (although they have a new client in Fannie’s, in the Disney-worthy town of Warwick, near their home and farm). “Markets are so important to us, to see those people every day,” Jeff says. “I want people to spend $1,000 a year, not $1,000 a meal.” And as Adina completes his thought: “We want to give normal people fabulous food.” 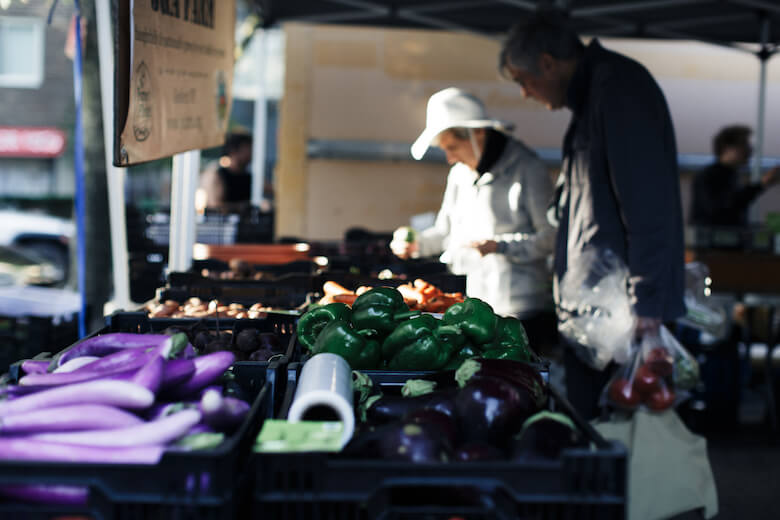 His compact stand at the Friday market looks like a little jewel box, with small crates heaped with the likes of red okra and striped eggplant and Green Zebra tomatoes, all alluringly displayed.

J&A’s few acres comprise three odd-shaped plots carved out of expansive fields of black dirt, soil so rich it almost qualifies as compost. Even today their neighbors still grow mostly onions, while Jeff is endlessly experimenting with shishito peppers and striped limas and lemongrass and various choys, not to mention at least half a dozen shapes and colors of eggplant.

And he is doing it without the chemical assist so many traditional farmers rely on: spraying for bugs and weeds. You could almost add a fourth story line, on the accidental organic farmer.

When the Bialases took over the farm, without even a lease but just a handshake, he says, the land had been fallow for decades.

“I was plowing and noticed a lot of worms came up, which I’d never seen on my parents’ farm,” he recalls. “In mid-May I noticed the spinach was covered in aphids but had no time to research how to deal with them. Next week I saw ladybugs had come in to cover everything” and remove the pests. “I looked at it and thought: This is how it works. Pay attention to how things behave, be attentive to details, don’t try too hard, fertilize plants just enough to make them grow. Plants send out signals.”

Adina, again finishing his thought: “The farm taught us.” 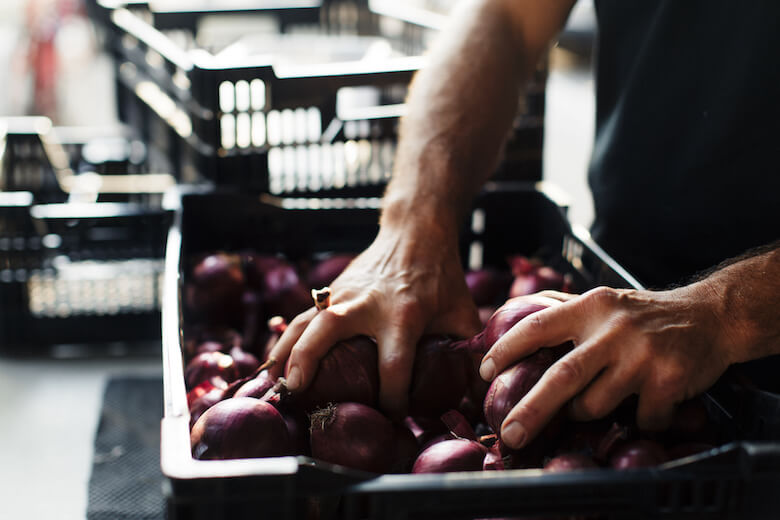 Bialas’s family started out in 1939 growing a single crop, first celery and then $1-a-bag onions, until he and his mother saw the potential of vegetables from a truck garden and headed south, to the Greenmarket then on 102nd and Amsterdam Avenue.

Their farm, like more and more in the age of greenwashing, does not carry the USDA organic certification despite using those practices. Instead it is “Certified Naturally Grown,” which means a team of equals comes to evaluate how carefully the couple are raising their peas and popcorn and peppers.

One of the reasons their produce looks so seductive is that a washing room was one of the couple’s first investments when they took over a broken-down barn to start the farm. Cucumbers, potatoes and more get a rinse and brush-down in a machine in a space that still lacks lighting as the couple runs their operation on a boot string. The coolers in the next rooms are chilled thanks to a Coolbot, a gadget that “tricks a regular air conditioner into going down” to refrigerator temperatures, thus saving on electric bills.

They outfitted the farm with wheelbarrows and rakes and other tools from yard sales, bought equipment with loans and found a greenhouse on Craigslist. They started off growing peppers and tomatoes in trays in the kitchen of a rental house. Within weeks they were planting peas, spinach and radishes. Before June they were back on 97th Street.

The farm now has a chicken coop with Aracana eggs and a beehive for honey. The apricot trees the couple planted have not borne fruit, but the raspberries on their bushes were fat and juicy this summer. 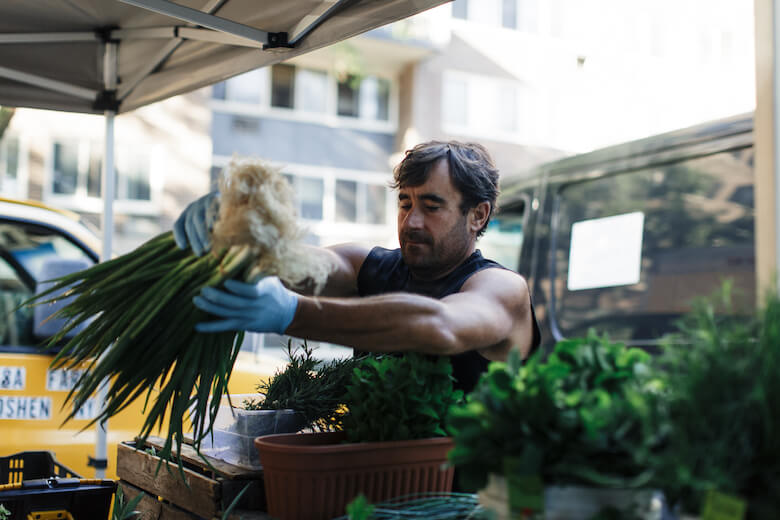 Even today their neighbors still grow mostly onions, while Jeff is endlessly experimenting with shishito peppers and striped limas and lemongrass and various choys, not to mention at least half a dozen shapes and colors of eggplant.

As the farm has prospered, the Bialases now live in a 50-year-old farmhouse they bought four minutes from the farm (“seven if I forgot rosemary and I’m behind a tractor”). The kitchen has been renovated, and Adina’s 60-plus boxes of cookbooks from her previous life are everywhere. She trained at the French Culinary Institute (now International Culinary Center), worked for the Food Network in the pre-Emeril era and was a corporate pastry chef when she and Jeff started dating (first night out? Great NY Noodletown on the Bowery).

They are raising two daughters, Maya, 14, who started coming to the Greenmarkets when she was six months old, and Claire, who just started sixth grade. And they have a calico cat with the unlikely name of Bryson.

When Jeff and Adina started growing, they and a couple of high school kids did all the work. Today, along with seasonal help, they have a father-son team from Mexico who have been with them for years and who cultivate their own small plot to feed their extensive family in nearby Middletown. From them, Jeff has learned to grow the herbs papalo (a more reeking cousin of cilantro) and feathery pipica. Working in the fields with them, he says he can pick 500 heads of lettuce an hour.

What he grows is far more diverse than many other farmers. That includes an array of choys, because Adina loves Asian food and has to cook it at home, Goshen being no Chinatown. The family, Jeff says, will eat 16 to to 18 vegetables a meal, shaved into salads or cooked or for snacking. “We eat 20 pounds of tomatoes a week just as a side dish.” 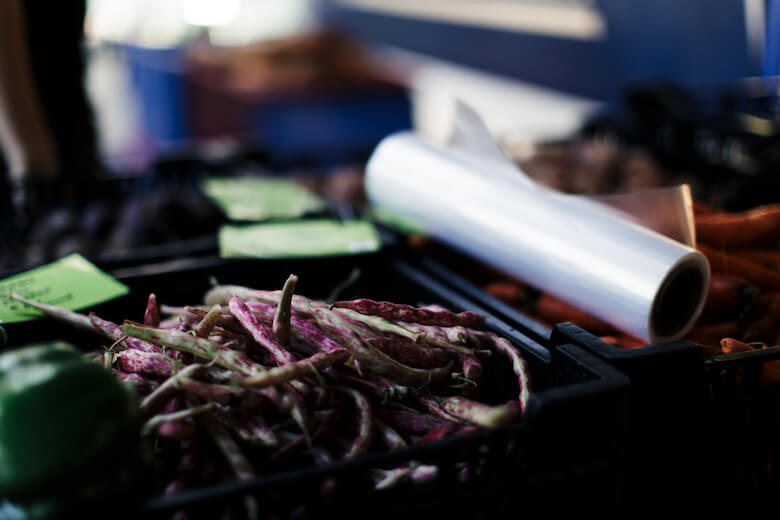 Their farm, like more and more in the age of greenwashing, does not carry the organic certification despite using those practices.

This year he has 15 types of winter squash to sell and always has 20 types of herbs (which he bundles at the market on Fridays, partly because they would wilt if done ahead of time and mostly because it gives him a chance to chat with and distract customers in the inevitably long line).

“Every year I think I’ll cut back, but people get so excited,” he says. “The seed companies send you a free packet and I think, `Well, I guess I’ll try it.` Looking at seed catalogs, I turn the page and always want more.”

Then he sets the results out so that shoppers will have the same response: More, please. “I definitely have a large interest in marketing,” Jeff says. “At my parents’ farm I would move things around to have them sell.” So he puts some lettuces together but not others, lays out herbs alongside complimentary turnips and carrots, has a few temptations like ground cherries/husk tomatoes waiting at the scale and register.

And if you want to know how to cook any of the more unfamiliar produce, like sunchokes or chrysanthemum greens, ask the guy who grew it. Unfailingly, he and Adina have just served it to their most loyal fans, at home.