What Ham, Squid & Turnips Have in Common, Besides Funny Names 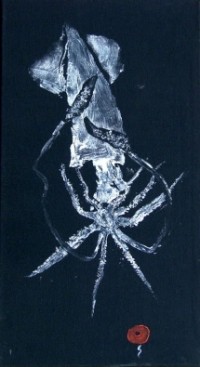 Fish print of a Montauk-caught squid by Annie Sessler, eastendfishprints.com.

We were seeking input on a new aspect of Eat Drink Local week that we’re very excited about: the ingredient of the day. Think of it as a type of cropmob (ingredient-mob!) that creates some awesome, concentrated demand for a specific regional food and drink. On Monday of EDLW, chefs and foodmongers might have to feature one type of stinky cheese; on Tuesday, they might turn their attention to  purple okra; on Wednesday, everyone may be pouring the same varietal of wine. You get the picture.

And in case you don’t: From September 26th to October 6th Edible Manhattan, Edible East End and Edible Brooklyn— in conjunction with Edibles statewide and GrowNYC — are running Eat Drink Local week, our celebration of the local food chain through heirloom vegetable auctions, wine tastings, DIY challenges, lectures, garden tours, farm to table dinners and countless other events… like a daily undersung locally sourced ingredient of the day.

Once we pick those ingredients, Eat Drink Local partner restaurants will be cooking with them, and we hope home cooks (meaning you) will try them too. We hope to choose ingredients that, for the most part, aren’t already ridiculously common. The results will offer, we hope, some glimpse of how big a market there might be for all these products when we all start eating and drinking local. (And that they taste good.)

And an ingredient every day!

But back to the master list of ingredients. Dickson suggested that if there’s a particular cut of meat that would give chefs flexibility and be a boon to farmers in the region, it would be ham, which is economical, abundant and can be cured, cooked and eaten in many different ways.

Cleaver said that squid would be a fitting, underappreciated and very sustainable  Empire State seafood, and she put in a plug for plenty of veggies (naturally).

And Ginsberg, who helped curate many of the recent delicious additions to Chelsea Market, suggested that we plan an ingredient of the day event for October 4. So mark your calendars, and get ready to fall in love with ham, squid and turnips, which are now on the short list of prospects for ingredients of the day.

But we need some more candidates: Tell us your favorite fall ingredient that you think should be featured around town, and around the state, during the week. And if we pick the one you suggested, you’ll get a one-year subscription to Edible Manhattan. [UPDATE: Check the master list of ingredients here.]