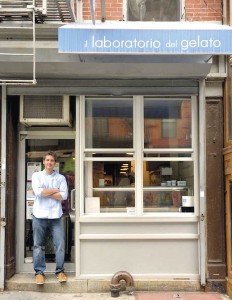 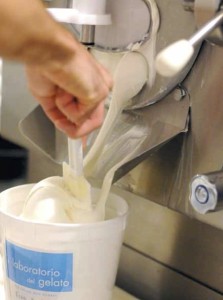 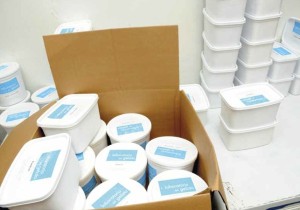 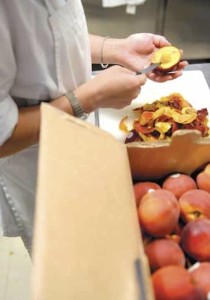 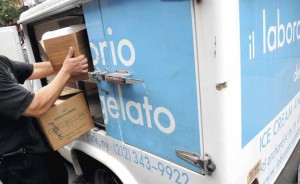 For most of its eight-year history, Il Laboratorio del Gelato—Jon Snyder’s tiny artisanal gelato shop down on Orchard Street—hasn’t always been so sweet to ice cream addicts, meaning those who head to the Lower East Side after work for a scoop of, say, his silky, slightly earthy malted milk chocolate or meander by on Saturday nights for the pleasingly pink cocktail-like confection that is his grapefruit Campari sorbet.

When they arrive, they join a near-daily stream of befuddled buyers surprised to find Snyder’s 550-square-foot factory shuttered by six. Il Laboratorio, they discover, isn’t one of those dessert destinations where high chairs and hipsters mingle over mint chocolate chip, but a real production plant—albeit a pint-size one—which places more of an emphasis on wholesale than retail. Over 90 percent of Il Laboratorio’s gallons go to chefs, says Snyder, and they want deliveries well before dinner service starts at 5 p.m.

But when Snyder finally expands his shop, his storage and his hours with a 2,750-square-foot showplace opening next to Katz’s literally any day now, you’ll no longer have to hit a restaurant to get your fix of pistachio or peppermint stick.

In fact, the majority of Il Laboratorio’s 200 or so flavors, all, from chocolate amaretto crunch to salted caramel to cheddar cheese, churned in that shoebox space next to the Tenement Museum—“it’s driving me crazy,” says Snyder—were created with dessert menus in mind. Snyder has a client list that includes many of the best eateries in town, and that’s not surprising considering this is the same guy who launched the buy-it-anywhere brand Ciao Bella in 1984 at the tender age of 19 and sold it at just 25.  Back when he birthed that brand, he scored white-tablecloth clients like the “21” Club and the Russian Tea Room, while today his second scoop shop sells to the likes of the Standard, Mary’s Fish Camp, ’Inoteca, Landmarc, Prune and Pastis. There’s honey lavender made for Milos; date for Thaim; black sesame, tangerine and lemon shisho for En Brasserie; and a brand-new Guinness for the Lion, John DeLucie’s latest celebrity-packed venture.

DeLucie, like most of Il Laboratorio’s regulars, also gets vanilla: “Everybody orders vanilla,” says Snyder, who notes that it’s partnered with so many pies and cakes citywide, it makes up a third of the 200 gallons he sells every week. (And talk about fresh:

Since slim space prohibits storage, much of Il Laboratorio’s gelato is made mere hours before delivery—yes, this frozen food is fresher than most fish.) And should you deem vanilla too plain—not that Snyder’s, a perfectly pure palette of plain cream kissed with a swirl of hand-scraped vanilla seeds and two types of imported extract, should be dismissed as such—he offers other studies in white: crème fraîche, mascarpone, sour cream, Greek yogurt, ricotta and buttermilk.

If those seem somewhat simple in an era of heirloom-blueberry-peach-blossom or bacon-milk-chocolate-chip (yes, those really do exist, though not at Il Laboratorio) that’s partially the point.  Snyder’s specialty is distilling the essence of an ingredient or two into its creamy frozen form: peach, blackberry, basil, avocado, bourbon pecan, cinnamon-buttermilk or cactus pear. In many ways Snyder was one of the first to hone in on the current culinary obsession with varietals—the blueberry notes of pure Ethiopian coffee, say, or the distinct muskiness of heritage breed pork.  Obsessed with ingredients, he makes three flavors of honey (lavender honey, chestnut honey and acacia honey); four of fig (mission, white, black and brown Turkey); 10 of chocolate (amaretto crunch, chocolate chip, cinnamon, Kahlua, hazelnut, dark, milk, milk malt, Thai chili and white) and five of apple (Fuji, Gala, green, Honeycrisp and Braeburn).

And while Snyder savors collaborating with chefs, he says it’s making the cold stuff that really gets him hot. He goes practically dreamy when discussing the way flavors mature overnight; the differences between his little family of chocolates (“each, he says, “has its own personality”) and the joys of eating gelato before it hits the deep-freeze: “Soft has a really beautiful consistency,” Snyder says wistfully, “and that can be really special.”

Indeed. Despite being lower in both butterfat and air than traditional American ice cream, gelato tastes creamier and more concentrated, its flavors are more in your face: Snyder chocolate is more chocolately, in other words; his mint more minty. And it’s even more the case with his sorbets: 90 percent fruit—instead of the standard 50 percent water—they’re a flash of pink grapefruit or honeydew or yellow watermelon so intense it’s like you’re eating a spoonful of perfectly ripe fruit that’s somehow been frozen en route to your face.

You could say his skills are a birthright: Snyder’s a third-generation churner, one who learned the ropes starting at age 10 under the tutelage of his grandmother Antoinette Ceriale. She, with help from Snyder’s mother, Phyllis, ran one of the original Carvel ice cream outlets up in Peekskill, New York, one of many shiny stands Snyder’s grandfather James built in 1951. (It’s still serving scoops to this day, though the family sold their interest in 2002.)

But it was a 1983 family trip to his matriarchal homeland of Italy that led him to launch Ciao Bella, which Snyder opened in SoHo back when druggies, rather than designers, strode past the ironwork facades. Like Il Laboratorio, Ciao Bella was designed not to serve retail scoops but for restaurant chefs, who back then—years before the city had artisanal everything—were just beginning to seek out small-batch and seasonal products. (Antoinette was on the original label, and Charlie Palmer, then at the River Café, was customer number one.) But after six years, Snyder sold the business for $100,000 to a guy who transformed the brand into a place with a factory in Jersey and a national name, growing it way beyond the one-man-band style of business it originally was. (The Ciao Bella cookbook just hit stores in June.)

Snyder, meanwhile, got an MBA from Columbia, then traded equities on Wall Street, but he missed his days crafting custard. Re-inspired to work downtown after September 11, he scored a space on Orchard after his non-compete clause wore off, bought a batch freezer from Bologna and again broke foodie ground: “We were the only thing on Orchard Street,” he recalls with a smile.  “We were really the first to be there. There was nothing south of Delancey Street then but fabric shops.”

And as his neighbors sold off their old-school storefronts to wine bars and boutiques, Snyder’s second ice cream operation blossomed, so much so that he must now often arrive at 4 a.m.  just to make enough product for the day: “We can’t keep up with demand,” he says, unable to recall his last vacation. (“It was… no, that’s not it.”) So when the new space opens at the very busy corner of Houston and Ludlow, they’ll move all production over a block, adding two more ice cream machines, an employee or two and a wall of blast freezers, meaning Snyder can actually store some product for a day instead of making and freezing much of it just hours before it goes out the door.

The process, though, will be the same: Into Il Laboratorio del Gelato’s machines will go the buckets of just-chopped cherries or lemon zest or mint leaves for sorbet, or the gallons of organic creamy custard mix (prepared just for Snyder by Mercer’s Dairy upstate) and out will come gelato, ready to be frozen in one of six blast freezers. A well-used whiteboard lists every flavor and the number of pints to be produced in tiny handwritten print.

That tiny print is fitting for a space the size of a walk-in closet, but Snyder cuts no corners: There are the black vanilla bean seeds to scrape by hand, the boxes of plums and peaches to peel and pit in summer, the crates of figs and pears and pumpkins that crowd the floor in fall, the bushels of Greenmarket mint and basil and lemon verbena, their leaves plucked one by one. On most days every square inch of the shop is crammed with three employees prepping the fruit or herbs for that day’s creations. Leaving room, of course, for the flip-top flap door in the floor to the basement storage area. When open, it cuts the shop’s already-short floor space by a third and leaves a gaping hole the size of a bathtub, which older employees navigate with aplomb.

In fact, Snyder’s naming of his place as a lab is doubly fitting, not just for its tiny size: The man has a scientist’s laser-like focus.  He’s still the first one in each morning, often before daylight (he naps in the afternoon), and delivers last-minute pints at dusk, pausing in between to answer the phone or serve a scoop or wipe down a machine. (Though, unlike many lab geeks, homely Snyder is not: A 2002 profile in the Times correctly called him a “babe” in the very first sentence.)

He no doubt gets his drive from his mother, Phyllis, a 77-yearold workaholic who would come help top strawberries after her nursing night shift in Westchester, and still makes the near daily drive down to work post retirement. Not for long, however, since Snyder bought her an apartment in the Ludlow, the brand-new building at Houston and Ludlow Streets whose ground floor will house Il Lab’s new lab.

That, unlike the old tile and cracked walls of the original, will include a view of one of the Lower East Side’s busiest corners; a glass-walled back room where people can watch Snyder’s crew peeling mangos and peaches; an iced coffee and espresso counter stocked with Four Barrel Coffee from San Francisco; room to make coffee granita, toppings like hot fudge and raspberry coulis;

50 flavors, rather than the 20 that will still be on offer around the corner on Orchard until the lease runs out in two years; seating (what a concept); and best yet, a closing time that doesn’t end with the average workday. At long last, you won’t have to visit a restaurant to get your fix after 6 p.m.: It’ll serve till 8 on weeknights, and midnight on weekends.