Dumplings on the Brain (and on the L.I.E) 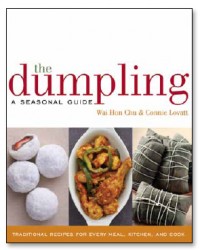 I usually have dumplings on the brain, a fetish heightened recently as the Chinese New Year passed, as I was teased by consecutive dumpling spreads in the first and second issues of Edible Queens (damn you, law hong jai). And also since I received a review copy of The Dumpling: A Seasonal Guide by Wai Hon Chu and Connie Lovatt, a beautiful, user-friendly guide to making dumplings from around the world–from Hungarian potato dumplings to Mexican tamales to a rainbow of bao and buns and mandu from the Orient.

(In fact Nach Waxman, the owner of the Upper East Side’s Kitchen Arts & Letters, lauded it in this issue of Edible Manhattan.)

It was armed with knowledge that on a recent night, racing back to Long Island and Edible East End against what will hopefully turn out to be our last snowstorm of the season, my co-publisher Stephen Munshin and I diverted from the Long Island Expressway at Exit 23 (aka Flushing, Queens) and headed north a mile to No. 1 East Restaurant at 41-27 Main Street, whose spinach dumplings the Times called “dense with spinach but sweet, not grassy,” and which SeriousEat’s Robyn Lee reviewed in more detail. (I wonder if Robert Sietsema has ever eaten here.)

(As background, it’s worth noting that if there was a Geiger counter-like device that indicated the presence of good Chinese food, the signal would fade the farther east of Gotham one drove–with the exception of a deafening pulse at around exit 23 on the LIE.)

Armed with my knowledge gleaned from The Dumpling (Wai Hon Chu also directs and sometimes teaches dumpling making at the Culinary Center at the Bowery Whole Foods Market), I was able to determine that the remarkably clean and light spinach dumplings we ordered were wrapped using the  “pleated half-moon fold.” (Or, on second thought,  perhaps they were “belly-button” or “bowl fold.”) The pork dumplings, in contrast, were wrapped almost tortilla-style, with both ends open.

It was a relatively fast meal, but essential for Stephen and I to steel ourselves against the drive back home. In fact, we were so happy sweating out our hot and sour soup and dipping our dumplings that we didn’t realize the kitchen had closed, and we had missed our opportunity to order a few dozen or more bao to go. Learning to make dumplings at home might be the best option for my fix, after all.