Egg Cream: The Classic Sparkly, Sweet Beverage Has Been Refreshing New Yorkers for Over a Century 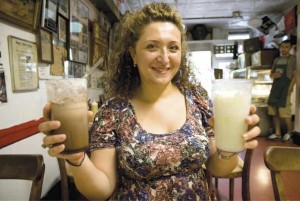 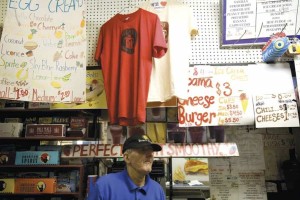 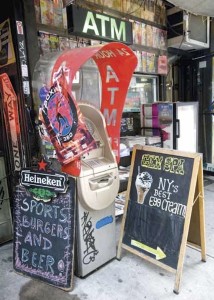 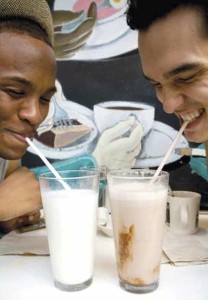 When I ask Ellen Anistratov—a member of the greater Yonah Schimmel family as well as manager of the famous 100-year-old knishery on West Houston Street—how she builds an egg cream, her face freezes. I feel immediately I’ve committed a terrible faux pas. She doesn’t answer. Instead, she tests me: “Tell me what are the ingredients.”

“Milk, seltzer and flavored syrup,” I reply, “but how do you make them?”

“You just said it,” she replies.

“It’s a secret,” she says finally, ending the discussion.

Egg creams might be simple, but the way they’re made can be shrouded in secrecy, which is why the egg-cream creation myth is swathed in confusion. The most common tale lays authorship at the feet of Jewish candy store owner Louis Auster, who ran a legendary shop at the corner of Second Avenue and Seventh Street in the early decades of the last century. This was a time when neighborhood soda fountains were more common than today’s Starbucks and functioned as local gathering places, each serving old-fashioned drinks like flavored phosphates, cherry colas, lime rickeys and fresh seltzer, often using homemade syrups. Details regarding Auster’s creation of the “Ur egg cream” are fuzzy because the merchant, establishing what would become a long tradition, wanted it that way. According to Lionel Levy—grandson of Harry Harmatz, who was the founder of Ratner’s Dairy Restaurant and rented the space to Auster—Louis never allowed anyone to see him prepare the formula, and the Auster family, whose shop closed in the mid-1970s, has never revealed the recipe.

Another common yarn, largely unsubstantiated, is that 19th century Yiddish stage star Boris Thomashevsky created the drink after sampling something called a “chocolat et crème” during a Parisian tour. In this country, Yiddish tongues mispronounced it as something that sounded like “chocolate egg cream.” This story helps explain why Second Avenue, formerly a theatre district known as Yiddish Broadway, remains the heart of egg-cream culture: The frothy potable is on offer at Gem Spa, Veselka, B&H Dairy Restaurant, Stage Restaurant, the burger joint Paul’s Place, Katz’s Delicatessen and Russ & Daughters appetizing store. (The Second Avenue Deli— now perversely located on 33rd Street—was also known for its egg creams, and still serves short versions of them gratis as a digestif.)
Still other theories bubble up. Sociologist Daniel Bell wrote in New York magazine in the 1970s that the egg cream was invented by his Uncle Hymie, who owned a candy store on Second Avenue in the 1920s. (If you believe Bell, his uncle was also engaged in an egg-cream war by another Hymie who owned another candy store where the Gem Spa now stands.)

“My theory is this,” offers Ray Alvarez, of Avenue A’s Ray’s Candy Store, one of the more famous egg-cream destinations. “The Russian Jews and the German Jews, they used to come to the East Side: cheap rent. They used to come to the candy store and say, ‘Give me two-cents seltzer. Two cents plain.’ One day they say, ‘Put something in it. Make it taste better.’ So they put some syrup in it. And milk. Back then everybody made his own syrup. And it starts foaming up. They say, ‘Looks like a egg cream, an egg white.’“

“This,” he admits with a shrug, “is my imagination.” Alvarez, to his credit, will show you how he makes his egg creams. His transparency is unusual. Most merchants famous for selling this mythical New York elixir are like Anistratov. They put on the Sphinx face when you bring up the drink, keeping mum on how they make them and sometimes even refusing to tell you their own name.

Take the owner of Gem Spa, a 24-hour newsstand at the corner of St. Mark’s Place and Second Avenue whose authentic egg creams have been touted for decades. Gem Spa was a hippie hangout in the 1960s: Jack Kerouac drank egg creams here; Abbie Hoffman sipped them a generation later. (The origins of that newsstand’s peculiar name appear to be lost to history.)

“All over the world, ours is regarded as the best egg cream,” says…what’s his name? Oh, right—he won’t tell me. Or have his picture taken. Or say how many of his superlative sodas he serves each day.

One way egg cream purveyors try to shut a journalist up on the subject of egg creams is by quickly manufacturing one of the drinks, as if one didn’t come for answers but a free cupful. When the soda jerk at Gem Spa whips up an egg cream and places it on the counter, the no-name owner appraises it with a baleful eye for a few terrifying seconds, then mutters some pointed words in a foreign language. The man has a standard, and the counterman hasn’t met it.

Tom Birchard, the owner of the 56-year-old Ukrainian restaurant Veselka, a block north of Gem Spa, also finds a sub-par egg cream intolerable. Properly prepared, the drink should arrive with a thick, high head of white foam. Birchard proclaims as much, and then asks a worker to fix up both a vanilla and a chocolate example. When the employee returns to the table with two utterly flat concoctions, Birchard’s face falls ever so slightly and he rises from his seat. “I’m going to have to get behind the counter myself, see if I can still do it,” he says.

Before he took over Veselka from his father-in-law, Wolodymyr Darmochwal, Birchard put in his time as a soda jerk, but it had been a while. “When I was working behind the counter 30 years ago,” he remembers, “it was more of a meeting place. People would come in and chat and you’d catch up on the neighborhood news. I miss that.”

Birchard reappears a few minutes later with a beverage of beauty, layered in colors of brown and white, like a pousse-café, the once-popular decorative cocktail that layers different liquors and liqueurs in eye-catching style. The Birchard egg cream boasts a head any beer lover would admire, and tastes better, too. “I’m glad you drank more of mine,” he says looking over his employee’s handiwork, “than those.”

Another thing old-school egg cream sellers have in common is braggadocio: Nearly all will tell you they make the best in town. (Those new to the craft are more willing to admit that they may fall short of perfection.) “I do not eat knishes anywhere else but here,” says Ellen Anistratov. The same goes for egg creams: “Whatever we serve here, I don’t eat anywhere else,” she says dismissively. “Everywhere else is second best.”

“Once I went around to the other guys to see if I could learn something and improve my business,” echoes Alvarez over on Avenue A, as if reading from the same script. “Everywhere I went was inferior. They should come here and learn.”

Meanwhile it’s a fact of the egg-cream seller’s life that the name is a source of endless headaches. At least once a day they must explain to the salmonella-wary that no shell was cracked in the drink’s creation. Again, theories abound. There’s Alvarez’s idea that it’s based on aesthetics, a position shared by others. There’s the notion that “egg” is a mispronunciation of German-Yiddish echt, as in “real” or “genuine.” Then there’s the belief that the drink was once made with ovo; this theory is supported by David Fox.

Oh, Fox. If you’re going to talk about egg creams, you have to know his company, H. Fox & Co., which has been making Fox’s UBet Syrups in Brownsville, Brooklyn, for the past century or so. Eggcream purists agree on little, but they come together as a chorus on this point: A real chocolate egg cream is made with Fox’s U-Bet chocolate syrup, period. Luckily you can find the stuff, with its unforgettably old-school yellow label, right beside the Hershey’s in nearly every grocery store in the city. According to the company, the syrup was added to chocolate milks and egg creams shortly after they started making it, at the dawn of the 20th century—the name “U-Bet” was devised in the 1920s—and has been used mainly for that ever since.

Kelly Fox, David’s son and the fourth generation of Foxes to run the business, remembers going to a restaurant opening years ago, when he was a teenager. “The chef had egg creams on the menu as a dessert. I found out about it and brought them a case of syrup just to say ‘hey’ and this is who I am. The head chef came over during dinner. He said, ‘I need you to do me a favor. My pastry chef, who’s in charge of all the desserts, thinks it’s acceptable to make his own chocolate syrup and call that an egg cream. I’m telling him that it’s wrong. Can you make one for him?’”

Fox’s U-Bet didn’t always have a lock on the trade. According to David Fox, the city boasted 25 or more syrup manufacturers until the ’50s, each dedicated to its specific neighborhood, Fox’s being Brownsville. Additionally, in the old days, as Alvarez says, nearly every shop made its own. Gem Spa cooked it up in the basement. Louis Auster himself had his own line of sweeteners.

As for Alvarez, his syrup man was a fellow Turk and apparently a hell of a guy: “He saved my life once,” says Alvarez. “I borrowed $11,000 from a loan shark. And the interest was $550 a week. I told the syrup guy, ‘I don’t know what to do. I can’t get out of this.’ He sent a guy with the money and paid the loan shark off.”

These days, Ray’s Candy Shop uses Fox syrups like everyone else, and Ray offers more flavors of egg creams than anyone in town. Among them: vanilla, chocolate, raspberry, cherry, orange, pineapple, peach, papaya, coconut, tamarind, licorice, Coke, Sprite, sky-blue raspberry, banana, lemon-lime, coffee and mango. Purists would decry most of these as blasphemy. And when Veselka’s Birchard was told that Fort Defiance, a bar and café over in Red Hook, Brooklyn, serves its egg creams in a wide, sundae-like bowl, he scoffs, “Well, that’s not an egg cream.”

Birchard probably wouldn’t think much of the hazelnut and espresso-spiked cappuccino egg creams at Chocolate Bar in the West Village, either. “I put them on the menu because I grew up on egg creams,” says owner Alison Nelson. “In the East Village there are a lot of places where you can just walk in and get one. Here, you have to go to a diner.”

Nelson began with chocolate and vanilla, using her father’s recipe. Nelson’s young staff, however, hadn’t benefited from her own Rockaway Beach childhood and were therefore ignorant of egg cream customs: Soon, they began to toy around with the recipe. “I was torn at first as to whether to put them on the menu,” Nelson said of her employees’ unorthodox creations. But when she did, they sold.

They also attracted the egg-cream police. “That’s one of the great things about New York,” says Nelson of those who obsess over traditions. “You have the people that have been here forever: They are very straightforward. If we had shown a weakness in how to make an egg cream, I’m sure they would have cut us off at the knees. They like to take a jab at us about the other flavors.”

Though Nelson, unlike most old-fashioned egg-cream makers, apparently doesn’t shy from an open conversation. “There are a million opinions,” she says. “I’m always up for the debate.”