For Thanksgiving, a Midtown Chef Makes an Ancient American Food

Today the age-old staple is essentially extinct—which is precisely why chef Matt Weingarten makes it. 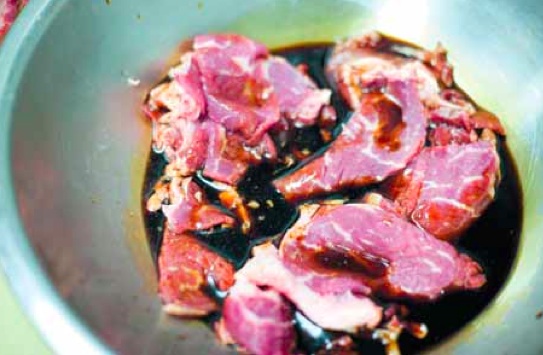 Ask chef Matt Weingarten about pemmican, the buffalo, fruit and nut bites he serves each Thanksgiving at Inside Park, and he’ll explain that it all began with jerky.

He could be referencing the food’s ancient origins. To preserve every morsel of the buffalo they hunted, Plains Indians dried the meat, then pounded it with nuts and berries into protein so portable Weingarten calls it the original energy bar. And it never goes bad: He says a centuries-old batch found recently was still edible.

But when Weingarten traces pemmican back to jerky, he’s actually describing how he first learned about it—or rather, how he didn’t. “I actually never knew what pemmican was,” he says. “But I’ve always loved beef jerky, and in my high school years in Maryland, I’d get this kind at the gas station, called pemmican. I just thought the word was just a brand name.” But in his early 20s he became increasingly interested in traditional foods and herbal remedies, so on a trip through the Southwest he bought a Native American cookbook and in its pages discovered a recipe whose name he knew from those gas station snacks.

He eventually went to culinary school and became chef de cuisine at Savoy in SoHo, but it wasn’t until nine years ago, while dehydrating his own beef jerky, that he realized the time had come.

“To make good pemmican,” he explains recently, after years of practice, “you have to dry out jerky until it shatters. Indians figured this out long before chemists could explain it,” he marvels. “Removing the water stops all microbal activity.”

The next step, as he puts it, “is to pound it into oblivion.”

The trouble was, nothing was up to the job—not even industrial kitchen equipment. “The jerky was just too tough. I couldn’t use a knife. I put it in the Robot Coupe and it broke the blades!” So in the true spirit of slow food, Weingarten used a mortar and pestle. He says that after an hour of hard labor, you get an intense appreciation for the effort that went into it. For a whole buffalo, he says, the process probably lasted days.

Appreciation aside, sore muscles are the mother of invention, and Weingarten eventually found he could put the jerky through his meat grinder—but only in small batches, and even so, it still gets stuck sometimes.

Finally he mixes in a little rendered buffalo fat, followed by dried native berries (blueberries, cherries or cranberries) and nuts (walnuts, pecans, even pumpkin seeds or pine nuts). And then, he says, awe in his voice, “it all comes together into this beautiful bar.”

Weingarten says pemmican was dried, not smoked. (“I mean, I don’t know, I wasn’t there,” he laughs, “but that’s my understanding.”) But the chef can’t resist a quick session in the smoker, to balance the salty and sweet. “That’s what gives my pemmican its signature flavor,” he says.

He needn’t worry about his recipe besting anyone else’s. Today the age-old staple is essentially extinct—which is precisely why Weingarten makes it. “I think it’s really important that we don’t forget how to make indigenous foods. We used those recipes for a thousand years and now they’re gone.”

So each year, he orders 20 pounds of buffalo from a ranch out West in time for Thanksgiving. “I don’t know how many times you can tell the Mayflower story,” he laughs. “I wanted to honor Native American heritage. Pemmican is about hardship and bounty, survival in the wilderness.”

He presents it on a tray of Native American tastes including spiced popped hominy (think corn nuts), smoked wild fish (like trout, walleye or mackerel) and ash cakes—a recipe that also ap- peared in that cookbook he picked up in his 20s.
“They’re just ash, water and ground nuts, that’s it. The ash works as baking soda—it’s kind of phenomenal.” Where, you ask, does one buy ash in midtown? You make it yourself, of course, by cooking herbs in an iron skillet until they blacken, then grind them with a little salt.

The rest of the meal is recognizable as Thanksgiving dinner, although Weingarten weaves native ingredients throughout the menu: squash soup, cedar-planked salmon, venison haunch and of course heritage turkey, plus enough sides to make a Pilgrim blush, followed by sweet standbys like apple crumble and pumpkin pie.

The pemmican gets guests talking. “Some people’s eyes really light up,” says Weingarten of the sweet smokiness. “It’s definitely not a challenging flavor.”

Still, a little goes a long way. Forget tryptophan—after more than a few bites of buffalo, you’d need to go do some serious activity. “I read that Ironman dudes eat pemmican,” says Weingarten. “It’s so concentrated that eating an ounce is like a pound of steak.”

He admits authenticity isn’t his ultimate goal. “As much as I want to honor tradition, pemmican was probably more sustenance than total deliciousness. I want total deliciousness.” So he goes heavy on the fruit and nuts, adds that smoke, and the outcome is indeed, totally delicious—a long-haired Native American named Buck even said so, and asked for the recipe.

Inside Park’s Thanksgiving dinner ($55, served noon–8 p.m.) always sells out. But if it’s just a bite of buffalo you’re after, you’re in luck. Weingarten offers that Native American platter—including the ash cakes and pemmican—for the week leading up to Thanksgiving, and at least a week after.

“We make a lot,” he says, “and it lasts forever. Literally.”