PHOTOS: Celebrating Corn and Community in the Rockaways

Earlier this month, Masienda founders Kate Barney and Jorge Gaviria teamed up with Rockaway Taco and others for Masafest: a celebration of corn and community on the beach. 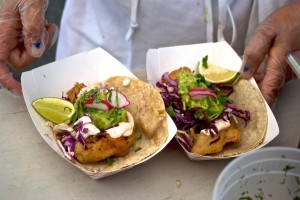 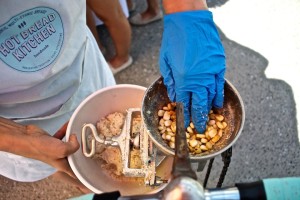 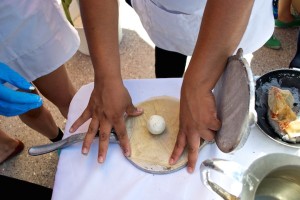 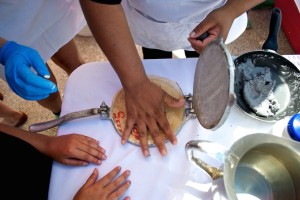 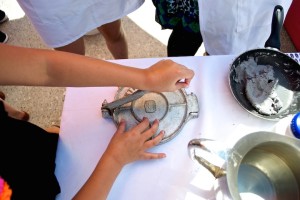 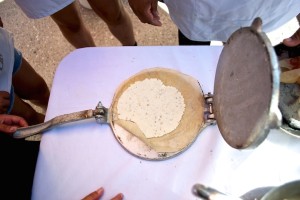 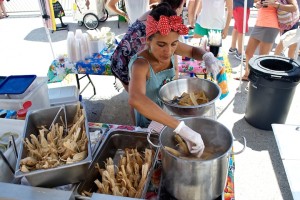 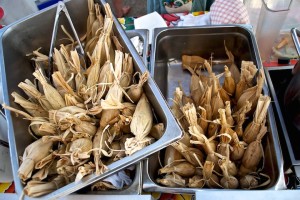 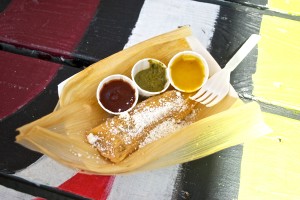 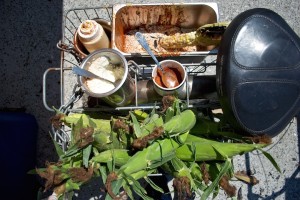 On Saturday, August 9, the Beach 97th Street Boardwalk in the Rockaways was an even bigger summer party than usual. In addition to the bikini-clad beachgoers trailing umbrellas and coolers, there was a woman dressed up like an ear of corn and two bicycle-powered cooking contraptions. 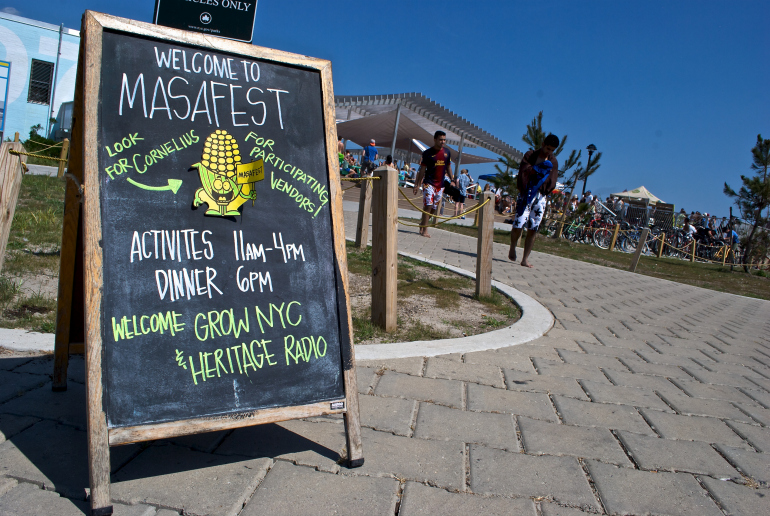 One, a grill on wheels, was manned by Taco Santo chef Jacques Gautier where he was roasting whole ears of corn for elotes. The other was a small human-driven grain mill. Eager kids hopped on and off the bicycle seat attached to the mill, taking turns grinding nixtamalized corn kernels for the ladies of Hot Bread Kitchen to turn into tortillas. 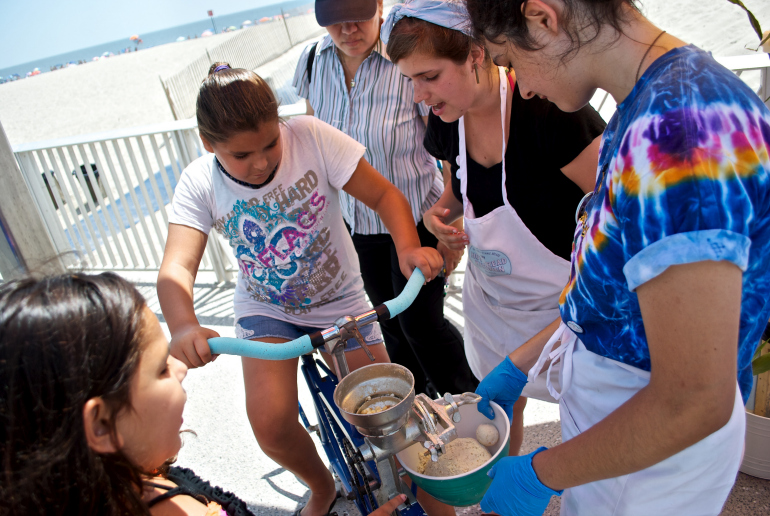 A pretty blonde woman in a strawberry-colored dress bustled back and forth between the small booths that lined the boardwalk, looking busy and excited. She was Kate Barney, and this was Masafest: a celebration of corn organized by Barney with her business partner Jorge Gaviria,  Rockaway Taco owner Andrew Field, Rockaway 97, GrowNYC and the Heritage Radio Network. 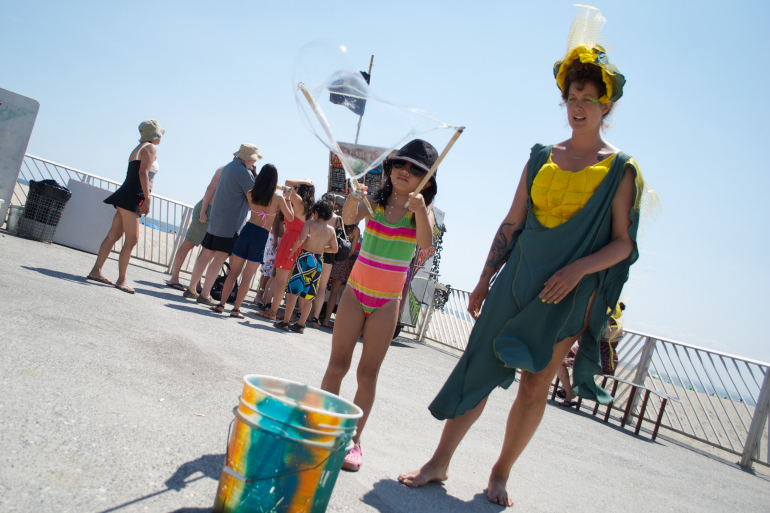 Heather Kramer of Arts in Parts, well versed in costume making and playfulness, was recruited to be the Corn Lady. Credit: Ben Jay

The co-founders of Masienda (profiled in our upcoming issue), Barney and Gaviria struck gold when Mexico City (and now NYC with his new restaurant Cosme) chef Enrique Olvera got on board with their plan to import heritage corn from Mexico to restaurants in the U.S., but they knew they would need other chefs as clients and partners. They also knew that Field would be one of them. Big fans of Field’s business, Barney and Gaviria had also become fans of the Rockaway community through their relationship with Field. After Hurricane Sandy, they had been especially moved and impressed to see the way the Rockaways pulled together.

In Field and in Rockaway they found a group of like-minded friends as collaborators and supporters. It quickly became clear that any festival they held would be more than just a launch event for Masienda, or even just a celebration of corn — it would be a celebration of the relationship between food and community, and Rockaway Beach would be the perfect site. 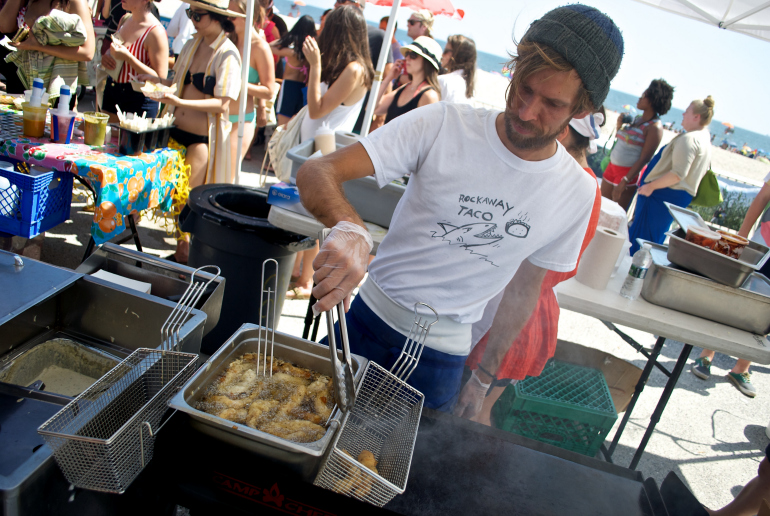 The famous fish tacos of Rockaway Taco in the making. Credit: Ben Jay

The forces were marshaled quickly for a day of sun and corn on the boardwalk. Caracas, another iconic and masa-friendly Rockaway restaurant brought tamales and the fermented corn drink carato de maiz; pastry chef Fany Gerson’s La Newyorkina supplied ice cream flavored with purple corn and cacao flower; and Hot Bread Kitchen demonstrated tortilla making. Grow NYC, which operates New York’s Greenmarkets, pulled in Gautier — long an ebullient and outspoken champion of the markets. Lastly, Barney tapped her secret weapon: Heather Kramer, founder of Arts in Parts, who would be the Corn Lady and provide face-painting. 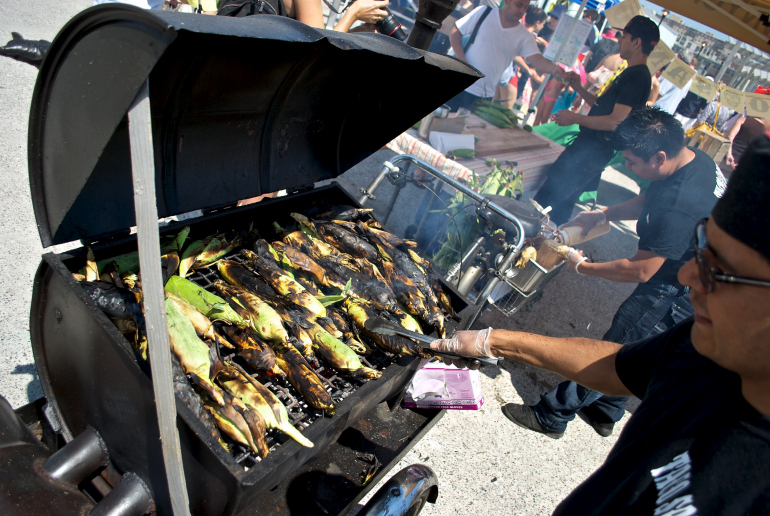 Taco Santo got their elotes on. Credit: Ben Jay

That night, chefs Gabriela Camara (of Mexico City’s Contramar and Merotoro) and Ignacio Mattos (of NYC’s Estela) would cook a MasaFeast benefit dinner (photos below). But that day the boardwalk was a warmhearted mashup of festival goers and beach denizens marveling to each other over the sights and smells, shoulder to shoulder in line for Field’s tacos and aguachile, a ceviche-like dish offered by Olvera and his team featuring octopus and fermented corn kernels. 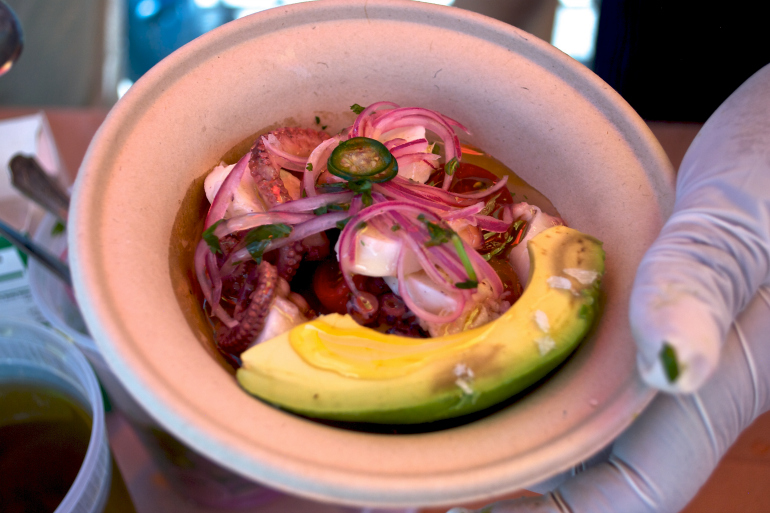 “Corn is the biggest commodity,” Barney notes, but it is also a daily item. At it’s heart, Masafest! was there to give people an experience of corn that was both mundane, and intimate. 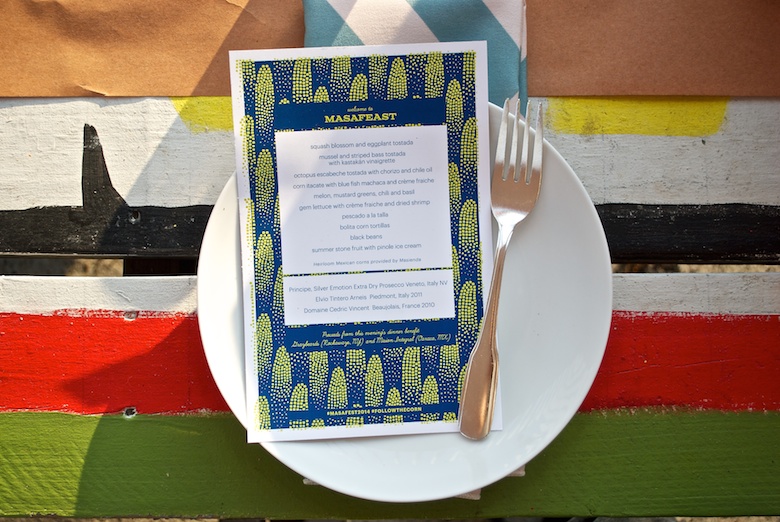 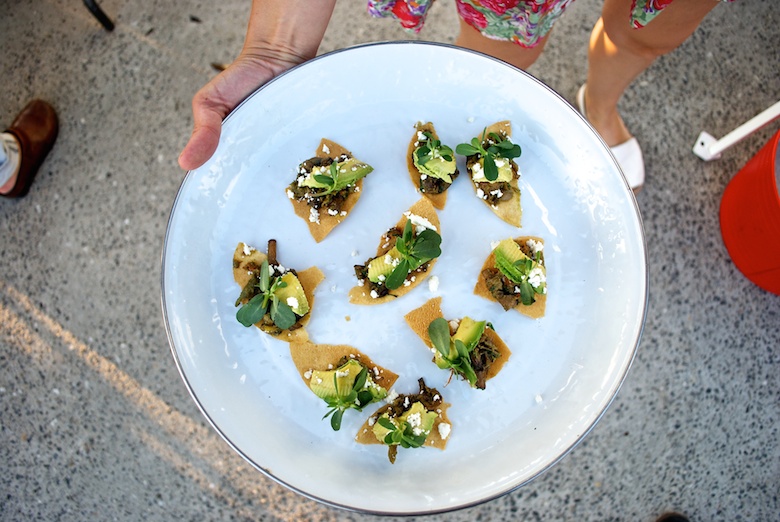 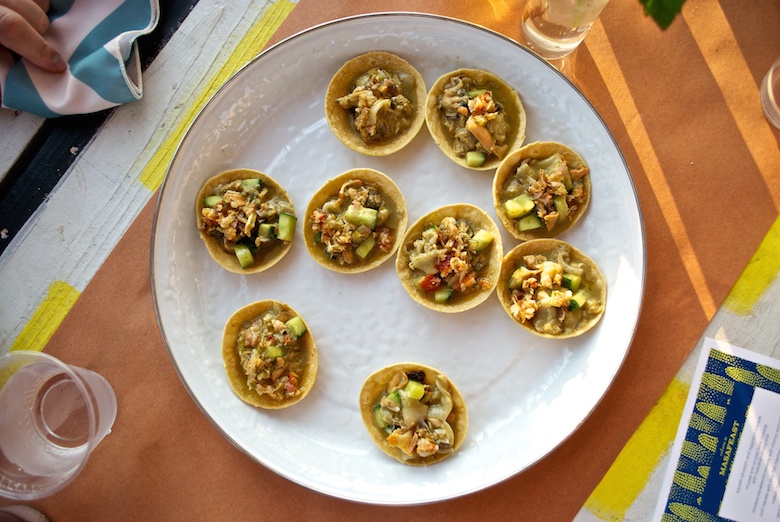 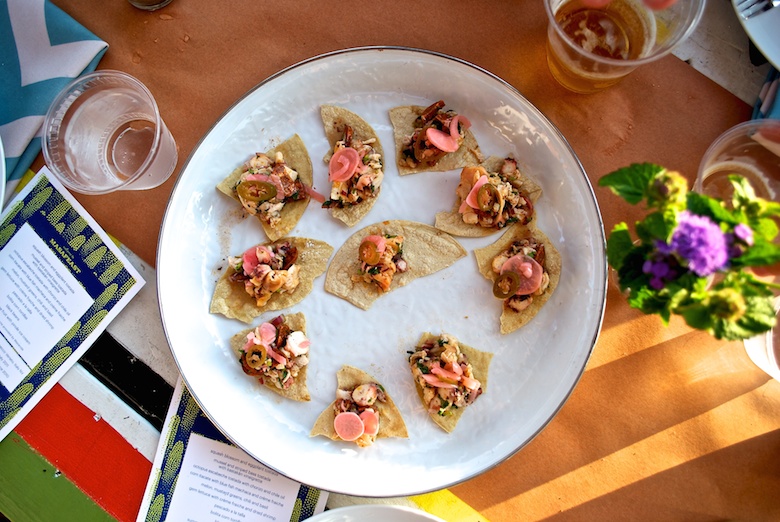 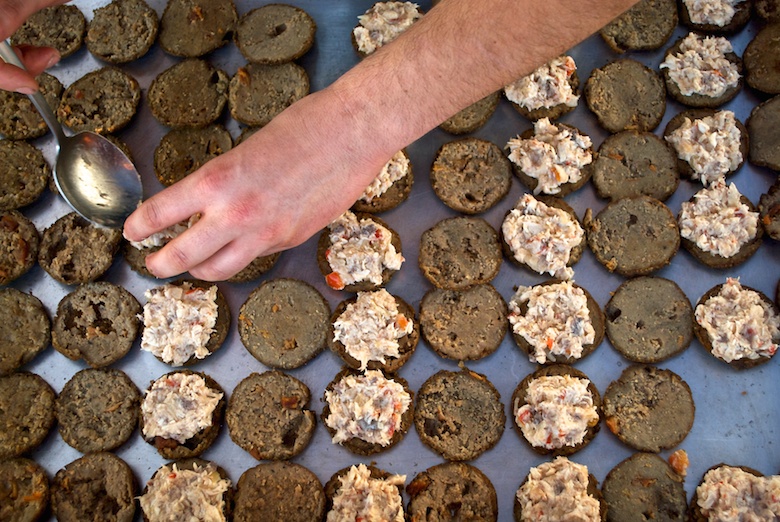 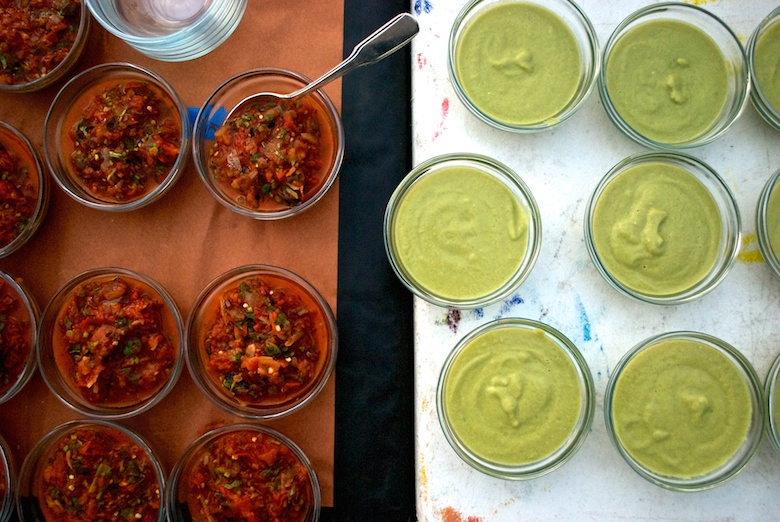 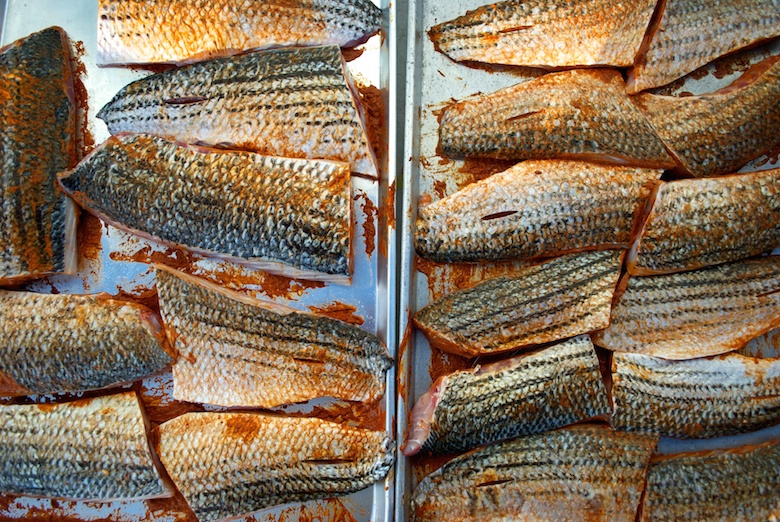 Gallery captions, starting with taco photo and scrolling to the right: