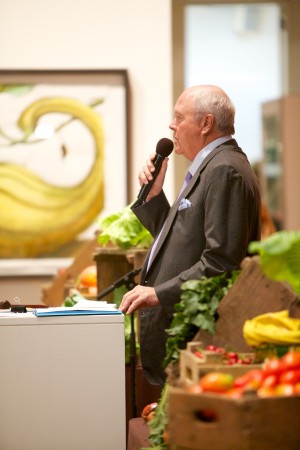 Not a normal night at Sotheby's: At one point, auctioneer Jamie Niven identified a bidder as, “the man in the shirt and no jacket.”

Editor’s note: It may boggle the mind that a recent fundraiser at Sotheby’s raised a substantial chunk of change in the name of heirloom vegetables and the people who grow them. But the giddy feeling in the auction room that night — the evening is described below by one of our correspondents — was shared among attending farmers, chef, food politicians and generous bidders, who maybe sensed a transition point in New York City’s food consciousness. Urged on by each other, they cried a collective cry to the Greenmarkets dowtown, the rooftop farms of Brooklyn and the orchards Upstate, that our food system can do better. While a few city chefs were disappointed by the postponement of a separate veggie auction for restaurant and grocer buyers — the early growing season meant farmers had already harvested and sold much of the commissioned produce — The Art of Farming raised $225,000 for the two charitable beneficiaries, GrowNYC and the Sylvia Center. Edible Manhattan was proud to be the media partner for this event that helped kickoff Eat Drink Local. And we applaud Sotheby’s for their growing support of matters related to food.

On the block at Sotheby’s last week were items the auction house rarely sees: vegetables.

There were heads of lettuce, pumpkins, squash and kale on display for bidders.

“We’ve never done a fundraiser of this nature,” said Sotheby’s worldwide director of marketing Amy Todd Middleton, no pun intended. But, “An auction is an auction.” The event raised almost $250,000 for its beneficiaries.

Brent Ridge, a farmer and star of the new reality show, “The Fabulous Beekman Boys” on The Discovery Channel’s Planet Green, planted the seed for the event when he met Middleton at a birthday part, and suggested Sotheby’s host a vegetable auction. “I knew it would make it sexy,” he said. He mentioned the sexiness again when he introduced the auction.

But Ridge had envisioned a more literal concept than what ultimately took place. “What I thought we would do was auction off vegetables and invite city chefs to come bid on them,” he said. “It grew much bigger than I ever dreamed about.” Again, no pun intended.

Each auction lot included much more than produce. Meat purveyors — and eaters — were pleasantly surprised that the auction and dinner would not be strictly vegetarian. There was also “heirloom meat” for sale. Lot #23, titled “It’s what’s for dinner,” was a bundle of rib steaks, sirloins, London broils and beef tongue.

Sotheby’s auctions are usually black-tie, buttoned-up affairs, but this auction had a different dress code and ambiance. Guests embraced the theme. Women wore floral dresses; men wore overalls. One woman accessorized with a wreath; a man in linen had a lengthy white beard. People were introduced as simply “Farmer Bob” and “Farmer John.” At one point, the auctioneer Jamie Niven identified a bidder as, “the man in the shirt and no jacket.”

When farmers, locavores and chefs celebrate their, er, bread and butter, the food must embody their values. Guests munched on hors d’oeuvres like fall squash with quail egg and pickled cauliflower, and heirloom tomatoes with compressed watermelon. At dinner there were heirloom dragon tongue beans and dinosaur kale, aka Tuscan lacinato.

One farm owner, who asked not to be named, noted that although “sustainable” was one of the night’s buzzwords, tri-state farming is not exactly sustainable, because of the winter. “It’s one of those things you do that you need a day job to support,” he said.

P. Allen Smith, a television personality who hosts a garden show on PBS, had several items at auction, including his work of art, “Reclining Eggplant,” and a lot including live turkeys, geese, chickens and ducks. The animals were not present. “We thought it would be too traumatic for them,” Smith said. “They have never been to a cocktail party before.”