Cocktail of the Week: Desert Shandy

I love a Shandy. And, up until now, I was fairly well satisfied with just your average, work-a-day beer-n’-lemonade combo, if ever for its refreshing, low-alcohol “ahhhh” charms on a warm, sunny day. That is until I was ruined forevermore by talented barman, Eamon Rockey. 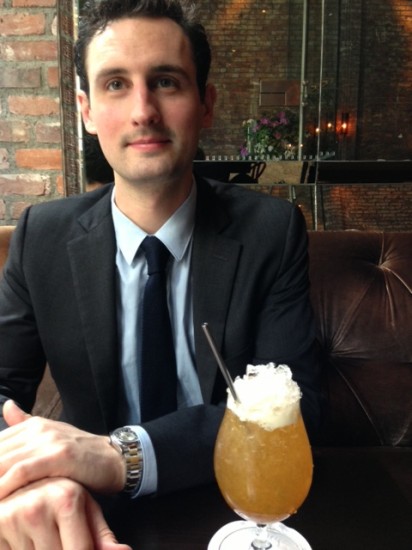 I love a Shandy. And, up until now, I was fairly well satisfied with just your average, work-a-day beer-n’-lemonade combo, if ever for its refreshing, low-alcohol “ahhhh” charms on a warm, sunny day. That is until I was ruined forevermore by talented barman, Eamon Rockey.

Lately, I’ve been coming across versions of the drink that push beyond a mere frosted-glass “Cheers!” and pivot into a much more interesting position in the cocktail echelon, as it were. Rockey, who was behind the bar program at spots like Atera, is a fan of the Shandy, too, and came up with his latest version, the Desert Shandy, for the recently opened Midtown restaurant, Betony, where he is currently the GM. “Shandy’s have evolved for me,” said Rockey one recent afternoon. “I don’t want to re-invent the wheel — I just kind of want to make the car go faster.”

After sipping on this last Friday, though, I’m not sure faster is the right adverb here — there’s so much going on in this multi-layered yet innocent looking, froth-topped quaff, that fast didn’t seem like the right way to approach it. For starters, as soon as you lean in, it’s like hovering over a rosemary plant. (“I spray a rosemary tincture over the top.”) And then comes the multi-layered rest of it — when you first take a sip through the adorning cold, metal straw, you get a burst of gentle sweetness (that’s from the house-made orgeat syrup and apricot liqueur he uses), which morphs into the full-flavored grainy and hoppy-ness of the Greenport Harbor Ale Rockey employs. Then it gets a little sit-up-straight sour (in a refreshing, good way) and sort of nutty (compliments of house-made sherry vinegar) ending in a lip-smacky, mildly bitter finish. Sip, repeat.

The idea for the drink’s composition came from two places: Rockey’s experience sipping sudsy things in San Sebastian, Spain, and — most interestingly — the unlikely source of the sweet side of chef Bryce Shuman’s menu. “The drink is a riff on an apricot, rosemary, almond dessert we have. Bread and pastry are really connected to beer, and I thought: Why not put them all in a glass?”