The Obscure “City-Dressed Meat” (And No, We Don’t Mean Lady Gaga) 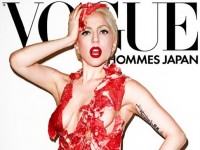 No, this is not what city-dressed means.

In the course of our reporting for our up and coming meat issue — it arrives March 1st — we came across a term called “city-dressed” meat. It’s not a newfangled phrase to describe the rash of meaty couture inspired by Lady Gaga last year, but rather a term that seems to have arrived in the early 20th century when slaughter and butchery of whole animals was slipping from local butchers to larger, more consolidated slaughterhouses and meat packers across the country, who would kill and/or “dress” the meat. It seems it was a point of pride to butchers on the Eastern half of the country — who were slowly becoming retailers, in many cases, rather than butchers, though many still cut to order from larger cuts  –to prove that their beef was from the Eastern half of the country and not the West, which of course would go on to become the breadbasket (steakbasket?) of the American beef world. Back then, butcher’s handbooks were also said to differentiate between New York, Philadelphia, Chicago and other specific-to-city cuts, few of which are seen today. The term city-dressed is also rarely seen (by those of us outside of the restaurant world,) but is still employed, as is Western-dressed. Today city-dressed roughly means your meat came from east of Ohio, which, if you think about it, is only two states away.