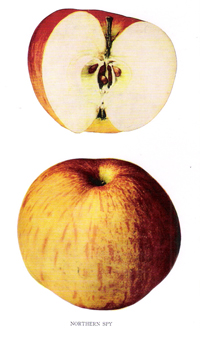 Apples and cider, our 11th and final Ingredient of the Day for 2010. Despite being native to Afghanistan, apples are as American as a certain pie containing them. Admittedly their ubiquity can make us forget they have a season, but they do, and it’s right now. Sure, the first “greenings” debuted back in late July, startling us there amongst the peaches, and some varieties keep so well farmers can sell them for months to come, but right now they’re in their full glory, literally ripe for the picking.

In a word, biodiversity. Until the early twentieth century, apple varieties numbered in the thousands; these days most Americans taste only five varieties in their entire lifetimes. That’s because commercial agriculture selected just a few varieties that withstand machine harvest and transport and look pretty on a supermarket shelf thousands of miles away. Never mind that red delicious and golden delicious seldom live up to their names. (In his excellent apple chapter of The Botany of Desire, Michael Pollan delved deep into what he called a “brutal winnowing” of biodiversity.) Lucky for us city dwellers, small family orchards, especially from the Hudson Valley, still grow old-fashioned varieties and bring them to Greenmarkets. In October you can find as many as 60 varieties on offer, from tart to sweet.

Plus it’s fun to know that apples, like people, reproduce sexually. Every single apple contains five seeds and each one, if planted, would grow a tree that bears an entirely new variety. (Every named variety, from Macs to Winesaps, was grown from a chance seedling that happened to bear fruit people loved, and every tree to grow that variety since is grafted from cuttings traced back to that single tree. Wow!)

And the cider for sale at markets is the real thing, too, with a sweet-tartness that changes slightly from week to week and region to region, depending on what varieties get pressed and where they were grown. As for that stuff in the store, most of it is reconstituted concentrate of apples grown in China. We’re also pretty fond of hard cider! Which is what Johnny Appleseed was all about too, by the way. Following his lead, Northeastern cider-makers sell and have sold their beverages in small batches locally from the Hudson Valley through the Canadian province of Quebec for multiple generations, with a few bigger bottlers sending their work south. These days, don’t miss the sparkling apple mead handcrafted by Enlightenment Wines, an ultra-artisan producer just covered in our pages.

Why We Love Them:

Shredded into slaw, baked into pie, pickled alongside pork chops, nestled in endive with blue cheese, simmered into sauce, simmered even longer into apple butter, pressed into ciders, not to mention raw out of hand…that apple-a-day dictum is onto something. Oh and apple cider vinegar booted balsamic from my daily dressing back in 2001.

Where To Find Them:

In crates stacked high at city Greenmarkets everywhere, as well as savvy stores. Some of our very favorite orchards include Locust Grove Fruit Farm, Samascott Orchards, Red Jacket Orchards and Wilklow Orchards.  But there’s still time to go pick your own, especially if you follow the apple-plucking piece we did in the past issue. Upstate orchards are abundant, especially in Ulster and Columbia counties, and many welcome visitors through the end of the month. Speaking of ends, this is our very last day of 2010 Eat Drink Local week, and  as a result it’s the last day you can taste the specials our restaurant partners created for the week using apples:

L’ECOLE THE RESTAURANT OF THE FRENCH CULINARY INSTITUTE: Johnny Apple-Fizz