When it comes to pigeon and squab, it’s all relative. 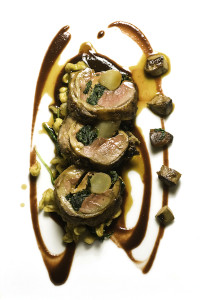 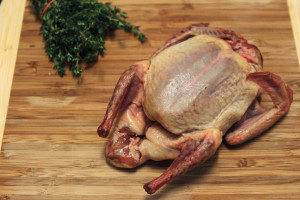 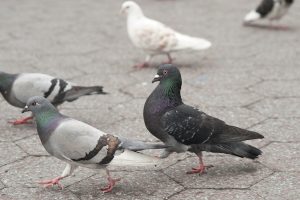 The bird was still steaming as I cut into its succulent red breast. It had spent the day marinating in honey, thyme and vinegar, and now came the roasty aroma and the moment I’d been waiting for: the first moist, silky bite. Surprisingly gamey, the flavor reminded me more of an elk steak than any poultry I’d ever eaten. So this is what pigeon tastes like!

Yes, I served pigeon for dinner, though eaters call it by another name—squab. Long before they were regarded as an urban plague, the hearty little birds served as a staple food and even delectable delicacy, from ancient Egypt to medieval Europe and into modern North America. Only in the past century or so have the birds fallen from culinary grace.

Today, pigeons have found themselves, well, pigeonholed into two groups: the ubiquitous and reviled rat with wings, and a succulent entrée on haute menus. While no New York eater would dream of cooking up the feral fowl, the domestic variety’s pedigree justifies indulging in Thomas Farm’s squab with foie gras–madeira emulsion on Per Se’s $295 winter tasting menu before catching the latest opera. But while they may not flock together, these are indeed birds of a feather.

As lamb is to mutton, veal is to beef, and Cornish hen is to chicken, squab is just another name for a young pigeon, harvested when it is plump enough to satiate an empty stomach but tender enough to please the palate. So how did this divide come about? Is there any difference between the sidewalk scourge and their country cousins cooing on upscale organic farms? Does that which we call a squab by any other name still taste as sweet?

Starting in the Middle Ages, French lords and ladies considered pigeons a delicacy. The bird’s dung made excellent fertilizer, and its rich red breast earned it the nickname “the bird of royalty.” For several centuries, nobles built elaborate dovecotes to attract feral pigeons (doves are the romantic members of the family Columbidae, which they share with pigeons), though their serfs hated them. The lowly peasants had to feed the voracious birds from their own grain yields and clean up their abundant dung. When the Revolution struck in the 1789, many of the dovecotes—which had become a symbol of aristocracy—were destroyed.

Rock pigeons—the species with whom New Yorkers share our streets—made their landing in the United States precisely because of their tastiness. French settlers introduced the birds in the 1600s, helping to expand their natural range of Europe, North Africa and South Asia into the New World. Early Americans also feasted on the local varieties, like the passenger pigeon, which they quickly began munching into extinction. Though numbering in the billions when Europeans first arrived, passenger pigeons were exploited as cheap food in the 19th century; Martha, the world’s last passenger pigeon, died in 1914 at the Cincinnati Zoo.

While Americans had long caught wild squab or tended small farms flocks, the first U.S. commercial breeding facility for squab popped up in 1874, with production ramping up in the years following. By 1907, hundreds of breeding facilities dotted the country, primarily to sell to restaurants. Some chicken farms were even converted to squab operations, while facilities in Bridgeton, New Jersey, alone raised thousands of birds dubbed “Jersey Squab.” The Great Depression brought the price of squab plummeting to that of chicken, pork or beef, which, according to Wendell Levi, author of the 1941 book The Pigeon, “allowed the housewife to include squabs in her family menus.”

But as factory farming spread its wings, a competitor displaced squab from the American menu: chicken. Agricultural economists found that while you can fatten a pigeon, you can fatten a chicken faster, explains Colin Jerolmack, a professor of sociology and environmental studies at NYU who recently authored a book called The Global Pigeon, due to arrive on shelves February 2013. By World War II, the sun had set on squab’s long heyday.

Meanwhile, as squab retreated from the family dinner table, Americans were coming to know the bird not for its plump place on the plate but for its unwanted urban ubiquity.

Jerolmack’s paper “How Pigeons Became Rats” describes an early instance of public pigeon-hating. Up until the 1960s, some parks even had designated pigeon feeding areas, but around that time a NYC park commissioner referenced the “filth and disorder” of Bryant Park brought upon by “winos,” “homosexuals” and pigeons. Public health officials (inaccurately) referenced the birds in connection with diseases, which helped solidify their low status. By 1980, when Woody Allen declared pigeons “rats with wings,” the birds were widely reviled.

“When you go to a restaurant and ask the waiter what squab is, they’re hesitant to answer,” Jerolmack says. “A lot of people think it’s a wild game animal,” he says. But today, the squab served at upscale restaurants and specialty butchers is usually raised on poultry farms.

Ariane Daguin, the famous French tastemaker behind gourmet ingredient supplier D’Artagnan, has helped Americans forget prejudices against fowl and other fauna. (Her father, Michelin-starred chef André Daguin, remains a star for championing magret, the large breast of the Moulard— the duck breed prized for foie gras—served rare.) In New York Daguin is very well known for foie gras, and, to a lesser extent, rabbit—both meats that are beloved in France but have something of a PR problem in America. Pigeon fits that portfolio perfectly, and under her wing, the bird has found favor here, albeit not under that name. Today D’Artagnan provides most fine Manhattan restaurants with their squab, dispatching 1,800 to 2,500 birds per week.

D’Artagnan offers several breeds of squab, but the King breed is their star. “I really fell in love with that when I arrived here because we don’t have that breed in France, and it’s exceptionally plump,” says Daguin. “I think I’ve been raving so much about it that some people in France have now brought it there.”

D’Artagnan sources squab from a cooperative of free-range farms in California. They’re harvested at about 28 days old, when the squabs reach adult size but before their young muscles toughen. “We have a very funny way to test whether the squab are the right age when they arrive at our loading dock,” Daguin says. “We open the cages, and if they fly out, that means they’re too old.”

In addition to their farm-raised squab, D’Artagnan also sells wild birds called wood pigeons. The animals come from Scotland (game hunted on U.S. soil cannot be legally sold) and are a bit smaller and leaner than the domestic squab, tasting of “true wild game,” Daguin says.

In France, dining on little pigeons is still a big thing. And here in the States, she reports a growing demand among chefs but also on the part of home cooks, who order the birds through her Web site. “People are starting to understand how delicate and rich squab is, and how easy it is to cook,” she says.

As for the city flocks, Daguin says, “unless you are dying and it’s a survival thing, I would never eat them.” But it’s not disease that makes pigeon a poor fit for dinner. Pigeon plagues are more or less a myth; they carry no more infectious pests than any other bird, including chickens and turkeys. Far more treacherous is the sidewalk birds’ diet. “As soon as wild animals are too close to man, they eat things that man rejects,” Daguin says. Jerolmack points out that feral pigeons could be eating rat poison, metals or battery acid—all things that cooking would not neutralize.

Nonetheless—and you might not want to read this while eating—a recent spate of pigeon nabbing has sparked rumors that some street birds indeed end up under knife and fork. A few enterprising individuals scatter birdseed to attract a feathery flash mob, then snatch the birds up in nets and stuff them into the back of vans. Most seem to wind up on live shooting facilities in Pennsylvania. But during his research, Jerolmack met some of these shady snatchers. “I’ve heard—but cannot confirm—that some street pigeons get sold to live poultry markets,” he says.

At such facilities in East Williamsburg and Bushwick, mostly serving a Hispanic clientele, live pigeons can indeed be found alongside ducks and chickens but the animals’ origins remain unconfirmed. “People know they’re not supposed to be selling street pigeons,” Jerolmack says. “If a poultry market is selling them, they’re selling them to customers who assume they’ve been bred.”

And though some media outlets reported a gang of vagabonds roasting pigeon over an open fire last summer in Prospect Park, officials told Edible that those claims were untrue.

Given the city birds’ trash-can diet, even hardcore locavores will want to leave them be. Instead, for eaters interested in tasting one of mankind’s longtime favorite flavors, L. Simchick butcher in the Upper East Side carries Daguin’s farm-raised birds for $22 a pound, or you can head down to Chinatown where frozen birds go for $7.89, or fresh ones for $14. While you’re in the neighborhood, swing by Columbus Park to see if you can spot one of those infamous pigeon-snatchers, or just to feed the birds.

In a medium bowl, combine honey, vinegar and thyme. Add squab, turn to coat and let marinate at room temperature 30 minutes, or refrigerate, covered, up to 1 day, turning occasionally.

Preheat oven to 400°; place squab on a roasting rack and transfer to oven. Roast until internal temperature reaches 165° and juices run clear, about 30 to 35 minutes.