This dish stars the same sunchokes and apples I’ve been roasting all winter, but here they’re raw, tasting fresh as spring. 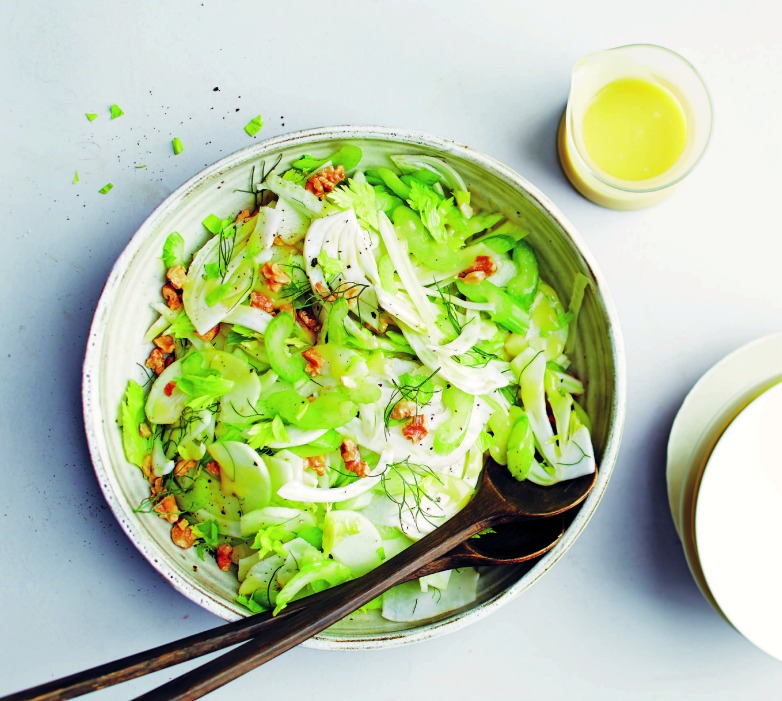 April is the cruelest month, or so T. S. Eliot famously wrote. Perhaps he was talking about the Greenmarket. I was at Union Square yesterday, wearing short sleeves in the shining sun, but the offerings were cruel, at least to anyone desperate for asparagus and rhubarb’s return. So I sated myself with some gorgeous greenhouse radishes (“the ones in the field haven’t even sprouted yet,” said farmer Tim Stark) and took home yet more of the leeks and cabbage I’ve been supping on since November.

Finally the snow has melted and farmers are sowing spinach and peas, but those harvests won’t be ready for more weeks than I care to count. Meanwhile, I’m sating myself with this refreshing salad from Martha Stewart’s kitchens. The recipe stars the same sunchokes and apples I’ve been roasting all winter, but here they’re raw, tasting fresh as spring. The whole book, smartly named Clean Slate, features cleansing foods like green juice, kale chips and salmon salad, and just leafing through its pages makes me feel fresh as a daisy — or, since it’s April, a daffodil. Pop down across 14th Street to Whole Foods for the fennel and celery and make this while you wait for asparagus.

Raw sunchoke has a mellow, earthy flavor and a crisp texture similar to jicama. We like it sliced thin and tossed with apple, fennel and celery (all A-list antioxidants) and a lemony vinaigrette.

Place fennel, celery, sunchoke and apple in a bowl of cold water. Stir in 1 tablespoon lemon juice and refrigerate (to crisp them and prevent discoloration).

In another bowl, whisk together remaining 2 tablespoons plus 1 teaspoon lemon juice, the mustard, garlic and honey. Whisk in oil until emulsified, and season with salt and pepper.

Drain chilled celery mixture, and dry in a salad spinner or blot with a paper towel; transfer to a serving bowl. Add celery leaves and walnuts. Toss with dressing, and garnish with fennel fronds.