The chef grew up on grilled sardines, home-cured chourico and huge stockpots of the collard green soup called caldo verde. 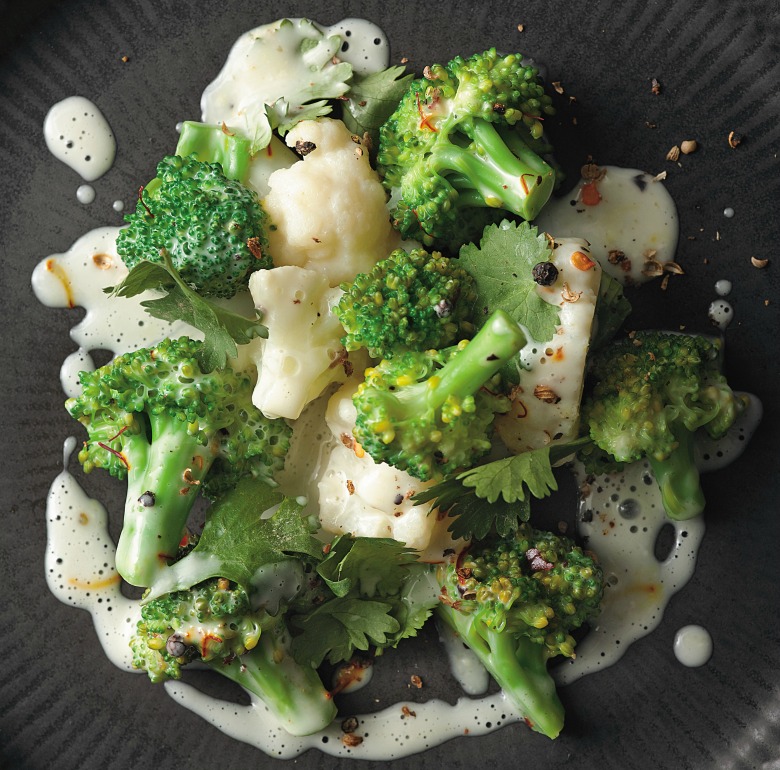 At Aldea on West 17th Street, Chef George Mendes’s menus are renowned for ethereal treatments of ingredients like sea urchin and foie gras. But if you’ve read his essay in our travel issue, you already know he named the upscale restaurant the word for “village” in Portuguese and draws lifelong inspiration from the rustic cooking of his family’s homeland.

His parents grew up near fig and olive forests and although they immigrated to Connecticut, he grew up in a tight-knit Portuguese-American community feasting on grilled sardines, roast sucking pig, home-cured chourico and huge stockpots of the iconic collard green soup called caldo verde.

My Portgual, his gorgeous new cookbook, includes intricate, upscale recipes like you’d find at Aldea — think quince with foie gras or sea urchin toasts with sisho and lime. But it’s also alive with the simple dishes he grew up on.

Heat a large saucepot over medium-low heat. Coat the bottom with oil, then add the chouriço, onion, garlic and a pinch of salt. Cook, stirring occasionally, until the onion is tender but not browned, about 10 minutes. Add the potatoes and enough water to cover them by an inch.

Transfer the chouriço to a cutting board. When cool enough to handle, cut into ⅛-inch- thick slices. Meanwhile, simmer the potatoes, replenishing water as needed to keep it an inch above the potatoes, until they’re very, very soft, about 45 minutes longer.

While the potatoes cook, prepare the collards. In Portugal, this is called the “caldo verde cut.” Strip the leaves off the tough stems and ribs, then stack a few leaves and roll them very tightly into a cylinder. Cut the cylinder crosswise into very, very thin strips, then cut those strips into 1-inch lengths. Repeat with the remaining collards.

Fill a large bowl with ice water. Bring a large saucepan of water to a boil and salt it generously. Add the collards and cook, stirring vigorously, until bright green and crisp-tender, about 2 minutes. Shock in the ice water and drain well.

Using a blender, puree the potatoes with their cooking liquid until very smooth. While pureeing, drizzle in 2 tablespoons oil. Press the mixture through a fine-mesh sieve into a large saucepan. Stir in more water to create a soupy consistency. Bring to a simmer, then fold in the onion mixture, collards, and chouriço. Season with salt. Divide among serving bowls and drizzle with oil.

Coconut-saffron cauliflower and broccoli (pictured above)

In a small skillet, heat the coriander, cumin and saffron over medium heat, tossing occasionally, until toasted and fragrant. Cool completely, then grind in a spice grinder until coarsely ground.

Fill a large bowl with ice water. Bring a large saucepan of water to a boil and salt generously. Add the cauliflower and cook, stirring occasionally, until crisp-tender, about 5 minutes. Transfer to the ice water. When cool, drain well. Repeat the blanching and shocking with the broccoli.

Heat an 8-quart saucepot over medium heat. Add oil to very generously coat the bottom, then add the onion, garlic, and bay leaves. Season with salt and sweat, stirring occasionally, until the onion is tender, about 10 minutes. Stir in the tamarind paste and toasted spices and cook, stirring, for 1 minute. Stir in the coconut milk and 1 cup water. Season with salt. Simmer, stirring occasionally, until thickened, about 35 minutes.

Reprinted with permission from My Portugal by George Mendes; ABRAMS; Fall 2014