Why Soda Makers Are Becoming a Must-Have Kitchen Appliance

Tabletop toys let you make your own seltzer or soda, sans packaging. 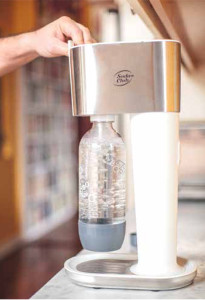 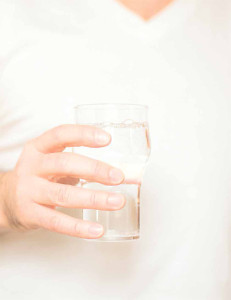 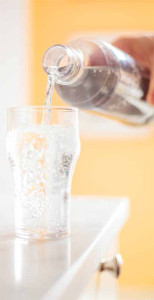 Like many native New Yorkers, Rose Fox has a thing for seltzer.

“It doesn’t get as much play as the bagel,” Fox allows, “but it’s just as important.” An editor at Publishers Weekly who grew up in the West Village, Fox was ordering a case from Fresh Direct every couple of weeks, but on top of the expense, there was a serious downside: the large recycling bins that overflowed with empties.

“I would look at all those bottles and think, what a waste,” says Fox.

Fox dubbed it “the seltzerizer,” but the device makes much more than bubbly water—add fresh juice, SodaStream flavors or your own artisanal concoction, and you’ve instantly got just about any sparkling beverage, from cola to ginger ale to DIY foraged-knotweed cooler.

Bubbly water has been coveted at least since ancient times, when Roman bathed in naturally carbonated springs, and Europeans have historically raised glasses of it to, or at least for, their health. The earliest at-home carbonation inventions date back to the 1700s, but the category was popularized in the early 1900s by a Manhattan-based company called the Compressed Gas Company of New York (later Sparklets Corp.) that made a clever contraption called the Sparklet—a soda syphon resembling a cocktail shaker that housed a compressed CO2 canister. “A Soda Fountain for Every Home” promised one ad from the time. In the 1940s and ’50s, Sparklets were considered the height of hostess sophistication, but they lost their luster as bottled beverages became cheap and ubiquitous. Hipster alert: You can still get vintage Sparklets on eBay and other collectable sites.

Today’s crop of home sparklers are slim and sleek, taking up less space than a typical blender, and look right at home on Manhattan countertops. The market leader is SodaStream, a company founded in Britain in 1903 that changed hands several times before being bought by its current Israeli owners in 2007. (A number of groups, including the human rights group Peace Now, have called for boycotts because its products are made in occupied territory in the West Bank.) The new owners redesigned the product and launched a global marketing push, selling more than 700,000 units worldwide in the third quarter of 2012 alone.

The SodaStream Starter Kit—including the appliance, a CO2 canister good for 60 liters’ worth of bubbles, six flavorings and a reusable one-liter bottle (the only one you’ll ever need!)—sells everywhere from Target to Macy’s to Williams-Sonoma for $129.

But it’s not the only new bubbler in town: The Cuisinart Sparkling Beverage Maker began hitting stores earlier this year. Its Starter Kit runs from $99 to $129, depending on the size of the CO2 canister, and comes with a recipe booklet for making simple syrups and effervescent cocktails. The concept just may be the biggest thing since the brand rocked American kitchens with the eponymous, and now ubiquitous, Cuisinart food processor in 1973. “This is a new category that’s getting a lot of attention,” said Mary Rodgers, Cuisinart’s marketing director.

You might be tempted to compare home carbonators to other short-lived “It” appliances, like the bread machine, or that panini press you couldn’t live without but now seems like a glorified sandwich squisher taking up a precious square foot. But in the annals of kitchen appliances, the at-home soda maker just might go down as among the most truly useful inventions—at least for busy, eco-minded New Yorkers inhabiting fourth-floor walk-ups.

Worldwide, we consume over 200 billion bottled beverages a year—and most of those empties land in the landfill. In the United States alone, our bottle habits require the equivalent of 32 million barrels of oil to make the bottles, and another 54 million barrels to transport them, according to foodandwaterwatch.org.

Factor in elimination of both schlepping and exposure to BPA in plastic bottles and the cost savings that come from making your own, and you can see why at-home soda makers have caught on in a New York minute.

The concept is still new in the United States, which leads the world in per-capita carbonated beverages consumption. “SodaStream is just scratching the surface here,” says Kristin Harp, marketing manager of SodaStream USA. But it is catching on fast, thanks in part to its wide distribution at the likes of Costco, Best Buy, Walmart and Bed Bath & Beyond. Signaling its ambitions, SodaStream aired an ad during the Super Bowl that crowed it could “save 500 million bottles on game day alone.” The company’s original ad, featuring exploding bottles of Coke and Pepsi—longtime Super Bowl advertisers—was controversially banned by CBS.

Sure, every 60 liters, you have to replace the CO2 canister, but at around $15 a pop that works out to 25 cents a liter, not so big an expense to burst the at-home carbonation bubble.

That is, if you can find them.

On a recent Sunday, two large windows at the Bed Bath & Beyond on 18th Street filled with colorful SodaStream products urged passersby to “set the bubbles free.” Inside, a sales clerk named Bernard said the product had “sold like crazy over the holidays,” and stock had only recently been replenished. The store however, was out of the CO2 canisters. “They’re just flying out so fast,” he said.

Amy Cortese is the author of Locavesting: The Revolution in Local Investing and How to Profit From It. She likes her seltzer with some Brooklyn Gin and a squeeze of lime.

Adapted from The Homemade Pantry by Alana Chernila

When it comes to DIY soda, the possibilities are exotic and endless. Make a simple syrup with any fruit or herbs and add a drizzle to seltzer for flavor, or stir ⅓ cup syrup into 1 cup seltzer for two words you didn’t think went together: artisan soda.

½ c. sugar or more to taste

In a medium saucepan, bring the rhubarb and 8 cups water to a boil. Reduce heat and simmer until rhubarb is soft, about 20 minutes. Use a slotted spoon to scoop out rhubarb and discard (or sweeten it with sugar and serve over yogurt or ice cream).

Add the lime juice, ginger and sugar to the rhubarb water. Bring to a low boil and cook, uncovered, for 20 minutes, until thickened. Remove from heat, add herbs and steep, covered, 5 to 10 minutes. Strain into a jar or bottle. Keeps in fridge for 10 days.