The vegetable in plain sight. 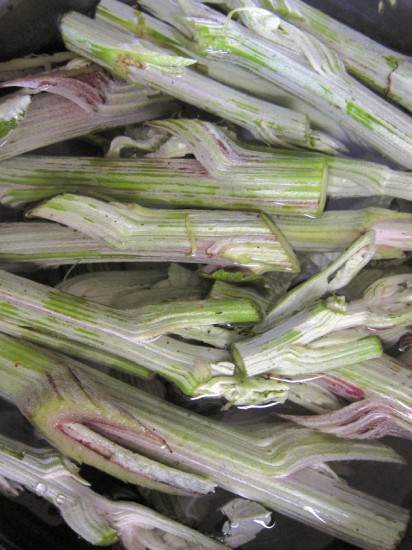 The vegetable in plain sight.

My foraging senses sharpen toward late spring when long, light-filled days inspire the physical uprising of one of my favorite edible weeds: burdock.

Most people know the plant only as an invasive nuisance that generates a plague of lock-jawed seed capsules whose hook-and-loop design inspired the invention, famously, of Velcro, in the 1950s.

Those who eat burdock typically cook only the root. But the fast-growing stems are a delicious wild food. Cooked, they are a semantic and gustatory marriage of globe and Jerusalem artichokes.

Harvesting this vegetable is about good timing. Arctium lappa and Arctium minus are both called burdock, both edible and are very similar in appearance. They are biennials and produce their choice flowering stem only in year two. You have to pounce on that stem before it becomes tall and tough. Prime harvest height is between one and three feet, when the young stem is still flexible. By the time it has shot up to eight feet and erupted in a burst of purple, thistle-topped flowers, it is too late—unless you like burs.

In culinary terms, burdock is best known as gobo, and has been cultivated for millennia in Japan, and more recently in Hawaii, for its impressive, starchy taproot. The root is good to eat in the first year, becoming too fibrous in the second. It lends itself to cold weather comfort cooking, providing a backdrop of bland carbohydrate satisfaction for sauces and stews. But unearthing a three-foot taproot whose last desire is to remain in the earth is more than this forager can bear. Maybe on private land somewhere, with the aid of a back hoe, but in full view of a confounded New York public? Nope. Digging up that first year plant also means that you are depriving yourself of those luscious flowering stems. And therein lies the plant’s true appeal.

In anticipation of the stems’ fleeting season, and of my first taste of their peeled hearts, sautéed in brown butter with a squeeze of lemon juice, I note new burdock locations on my spring travels around the city—easy to do since their leaves are distinctive: Picture Jar Jar Binks’s ears covered in a fine fuzz of fur and lying flat on the ground in a basal rosette.

Toward mid-May burdock becomes lush, the furred leaves tropically enormous and inviting to a stroking hand accustomed to cats. Hidden within the green depths of the second year plants is that stalk. Crouching on my haunches, wielding a carbon-blade Opinel like a bushwacker macheting her way through impenetrable thicket, I lop off the leaves that radiate from the sturdy stem. I cut it as low as possible to the ground, and discard the very skinny top. I also keep some of the leaves, filleting them on the spot, as their peeled midribs are a crisp and worthwhile vegetable in their own right, either steamed as you would asparagus, raw in any sort of salad, or pickled.

Peeling is key. If you happen to lick your fingers after working with any above-ground parts of burdock, you will recoil. Horribly bitter. Some foragers eat the young leaves, but you have to boil them to death to get rid of the bitterness, and I hardly see the point.

Preparing burdock requires some commitment. Every single bit of green must be removed from the stem to reveal the core, or pith, which is pale cream and tender. But anyone who has excavated and discarded the spiky heart of an artichoke has the chops to pass through this valley of the shadow of peeling. The reward is in that series of ephemeral mouthfuls.

Raw, it is succulent and crisp. When cooked, it absorbs the flavors to which you introduce it and caramelizes beautifully when sautéed with oil or butter. I prepare the stems, cut into inch-long pieces, à la grecque—with white wine, lemon juice, fennel fronds, coriander seeds and a very good extra-virgin olive oil added at the last minute, to turn the cooking liquid into a glossy emulsion. To stretch a precious supply of burdock, I may add whole garlic cloves or discs of sweet carrot. To trick and entertain a dinner guest, sliver the stems lengthwise and blanch before sautéing and adding to thin tagliatelle, finishing them in the bowl with a cloud of microplaned bottarga. Miso and soy are natural partners for the stems, cooked entire and served like pale, supple asparagus on a warm platter.

By collecting the stems you are disarming this invasive plant of its reproductive arsenal—its burry seeds—and saving City employees the time and trouble of rooting them up on increasingly invisible Parks and Recreation budgets.

Now if only I could persuade the powers that be to sit down to a multiple-course dinner of weeds and show city foragers a little love in return. •