When cold soup got hot. 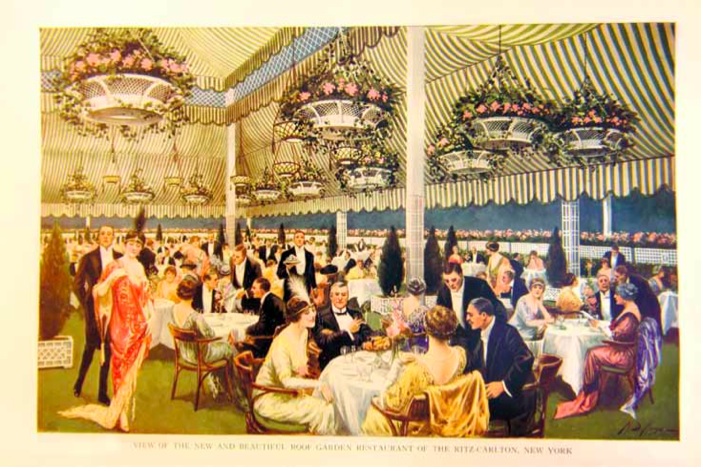 Despite what its name conjures up, vichyssoise, the cold, dreamy classic soup of pureed potatoes and leeks, was conceived not in France but right here in Manhattan, on Madison and East 46th Street. That’s where master chef Louis Diat ruled the Ritz-Carlton Hotel kitchen for 40 years, inventing hundreds of elegant, butter- and cream–laden dishes for visiting royalty, from both Europe and Hollywood, as well as for the titans of finance and industry.

Yet Diat is fated to be remembered—when he is remembered at all—only for the single soup, not for the decades he spent as Manhattan’s premier interpreter of haute cuisine, the creator of dishes such as “Chicken Gloria Swanson,” or “Breast of Guinea Hen Jefferson.”

In December 1950 New Yorker writer Geoffrey T. Hellman interviewed Diat, who offered up the story of his famous soup’s conception: It was the summer of 1917. “I reflected upon the [hot] potato-and-leek soup of my childhood, which my mother and grandmother used to make,” Diat told Hellman. “I recalled how, during the summer, my older brother and I used to cool it off by pouring in cold milk, and how delicious it was. I resolved to make something of the sort for the patrons of the Ritz.”

Diat’s recipe called for leeks, onion, butter, potatoes, chicken broth, milk and heavy cream, the last ingredient to be added after the soup was strained a second time. A sprinkle of chopped chives added color and a mild kick.
In a 1964 cookbook, the chef recalled that since he couldn’t find the right ingredients in Manhattan, “I finally persuaded one of my vegetable suppliers to find someone who would grow leeks for me.” Evidently the leek was the lettuce of its era.

The soup was an instant hit. Steel magnate Charles M. Schwab ordered it the day it debuted on the menu of the hotel’s roof garden, and promptly asked for seconds. Sara Delano Roosevelt, FDR’s mom, called up and asked for eight servings to be sent to her home. It was so popular that, in 1923, Diat turned it from a summer-only to a year-round menu item, allowing trendseekers to slurp cold potato soup even in winter. It dominated for decades, becoming the home entertaining symbol of refined, Frenchified taste (in 1957 the Times published a vichyssoise recipe alongside one for jellied beef à la mode), then a Joy of Cooking standard ladled from Tupperware across the country, and eventually a dinosaur of the fusty red-draped continental restaurant.

(Vichy, the spa town after which Diat named his crème vichyssoise glacée, had only pleasant associations for the chef, who had grown up in the nearby town of Montmarault—but it was later to be cloaked in ingnominy as the seat of the French collaborationist government. In a 1941 move that long predated the phrase “freedom fries,” several French chefs tried to rebrand the silky soother as crème galoise. Diat even dropped the name “vichyssoise” in his own cookbook, but the name stuck.)

Diat is not the last chef to be forever associated with a single celebrated dish. In Patrick Kuh’s 2001 book, The Last Days of Haute Cuisine, the author interviewed Wolfgang Puck, and wrote that he feared the chef “might actually get up and leave if I were to mention the words ‘smoked salmon pizza,’ the culinary invention that helped rocket Puck to fame. Turning the tables, Puck quizzed his interviewer: “Who was Louis Diat?” Kuh dutifully recited Diat’s CV, to Puck’s approval. “I had the sense that the world of Diat hung over the entire conversation,” recalled Kuh. “It was as if I’d said, ‘Diat was a man trapped by time and by a dish.’ It was a position Puck had made great efforts to break out of.”

But such trends are not forever, and by century’s end Diat’s soup had gone the way of the Charleston. In 1995, Zanne Early Zakrof wrote in Gourmet, “Vichyssoise went from being a mainstay on the menus of fine restaurants in the early part of the century to being abandoned by most chefs today,” suggesting the reason was either “fear of mispronunciation” or so much heavy cream in an era of fat phobia. (She offered a lighter version using poblano chiles.)

Recently, though, the classic is back, riffed upon on menus around town, including those of Hudson Clearwater and Ai Fiori. At the latter, chef Michael White sweats leeks and potatoes in olive oil, adds a bit of oyster liquor and vegetable stock and cooks until tender, before blending it all with a little cream, salt, white pepper and lemon oil, “to add a Ligurian touch.” He passes the puree through a mesh chinois strainer, and garnishes it with potatoes, oysters and sometimes caviar. “It has a very luxurious palate feel,” says White. “The brininess of the oysters is a counterbalance to the neutral flavor of the creamy potatoes.” The chef adds that he avoids the heaviness of granular chilled butter by substituting olive oil, and that with today’s high- speed blenders he can produce a lighter, airier soup than Diat’s version. Like a jazz standard that stays alive through reinvention, vichyssoise retains the ability to surprise.