Up Above the Gramercy Park Hotel, an Ambitious Little Garden 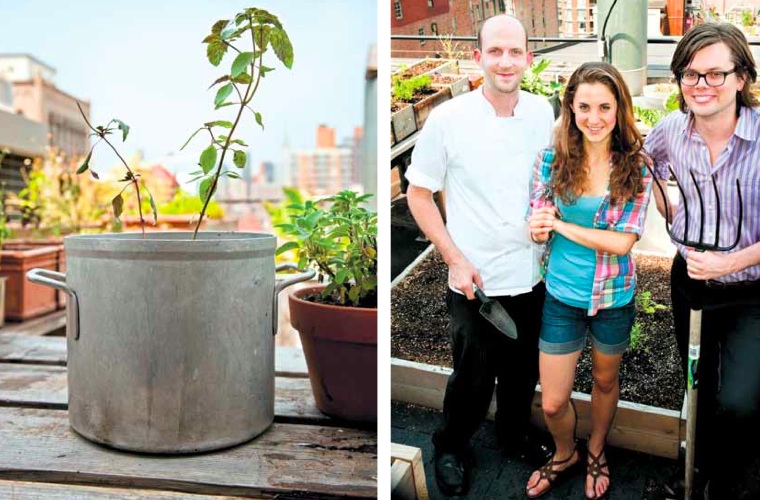 When Kevin Denton and Dan Dilworth stumbled onto the rooftop of the Gramercy Park Hotel, it took them about 15 seconds to realize they could turn it into a rooftop garden.

It was November of 2009 and the two staffers of the Gramercy Terrace — on the 18th floor of the hotel that also houses Maialino (Denton’s the manager, Dilworth’s the sous-chef) — were exploring the building when they followed a staircase up into the sparkling sky.

It wasn’t just the stars that sparkled — the space was littered with broken glass, not to mention a mountain of cigarette butts, but Denton, a Kansan who had spent two years in Siena, Italy, thought immediately of the 17th-century Palazzo Ravizza, specifically the kitchen garden that looked out over the Tuscan city.

So over the winter, they set to work — somewhat on the sly. “Initially it was pretty guerilla,” recalls Denton, who says they didn’t mention their plans to anyone. On their own time — and own dime — they hauled out the trash, ordered funky varieties from Seed Savers and Johnny’s Selected Seeds, and began dumpster diving for anything that would hold dirt. Down in the basement they found a treasure trove of potential planters, from paint buckets to stockpots to an enormous, four-foot duck-roasting pot left behind by Wakiya. Dilworth, who’d worked as a sailor, was chief architect, literally rigging together the growing structures, a compost setup, a rainwater-collection system fashioned from three 55-gallon grease drums, and an all-reclaimed-materials greenhouse that’s equal parts MacGyver and Mr. McGregor.

The hotel hadn’t yet hired a carting company to collect recycling, so Denton and Dilworth fished hundreds of FiJi bottles out of the trash, cut them in half and used them to start their seeds. The spring sun shone, and the roof literally sprang to life. By April they finally invited a few colleagues up to see their project, including a few from Maialino’s parent, Union Square Hospitality Group. They loved it — and thought the people at FiJi Water would, too. A month later the president of the bottled-water biz made a visit, and Dilworth served him a five-course lunch with bites born in his own bottles. As Denton recalls, it was a “no-brainer”; FiJi funded the effort with $5,000. The seed money, so to speak, allowed Denton and Dilworth to go on a Greenmarket shopping spree. They bought rhubarb plants, a blueberry bush, a fig tree and lots of topsoil. “We built and built and built,” says Denton, and soon they received another visitor: Danny Meyer himself. But what would the restaurant royal think of a roof garden that looked more Bushwick than Broadway?

“He was really surprised that all of this was happening across the street from his house,” laughs Denton, “and he was really excited to the point of being giddy.”

Turns out Meyer’s daughter would soon have a similar reaction.

High school junior Hallie Meyer had spent her spring semester on the working farm at the Mountain School in Vermont and came back to Manhattan determined to grow vegetables here. She approached Gramercy Park about planting a patch there but was turned away; Arlene Harrison, who runs the block association, suggested she talk to Denton and Dilworth.

She and Mama Meyer, Audrey, hit the roof, and Denton says for Hallie it was a eureka moment.

“In her mind she’s like, ‘Why aren’t we doing this in the city?’ and then she came back and saw someone in her dad’s company was doing it.” She signed on to intern with them for the month of June — to read as well as weed.

“We developed a curriculum,” explains Denton, “turned it into a research project so it was more than just ‘hey come water our garden.’” She researched urban farming and made a presentation to the hotel and Maialino staff on the environmental and financial benefits.

“One of the really exciting times,” says Denton, “was when she brought three fish trays worth of Swiss chard to chef Mike [Anthony] at Gramercy Tavern. Mike was thrilled and Hallie was beside herself with joy.”

This summer the garden is back in bloom — and the admittedly modest bounty is devoured at Gramercy Terrace and downstairs at Maialino. Hyssop perfumes cocktails. Strawberries and blueberries get whirred into daiquiris. rhubarb infuses rum. Wax beans and mint star with pecorino in a spectacular salad. Fresh chives and lemon thyme finish fish dishes. And a rotating rooftop salad is studded with everything from radishes and beets to pat- typan squash and black kale.

But don’t think that all this fine dining is changing the DIY approach. Denton says he and Dilworth have their eyes on harnessing wind power of a sort. “AC units and the hood are up there continuously blowing,” he explained excitedly. “We could put little windmills in front of that. We’re trying to figure out how to do it on the cheap, using bike parts — and we’ve been looking on eBay for old computer towers for their tiny fast fans. We could run our lights on that, and have zero impact.”