This issue serves up stories about bottle businesses for which delectability is only one objective. 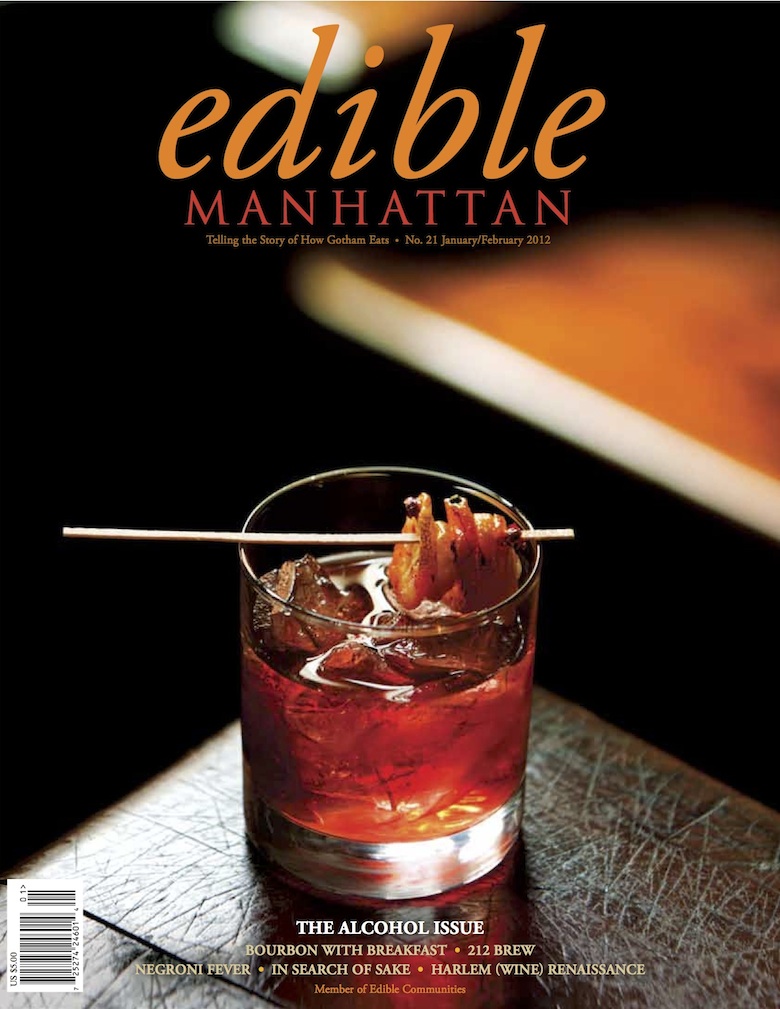 Fittingly, our 21st issue is all about alcohol. But we’re not observing the rite of passage with mindless bar crawls or cheap shots. Rather, in Edible style, we sip stories about some of the most interesting drinks in town, and even find bottles that make the world a better place, not just seem that way for a night.

For an apéritif, I suggest a shot of history. Consider colonial days, when men of all classes raised glasses together, before social stratification divided the dedicated drinking dens along class lines. Or pop the cork on our time capsule and discover some of the creative ways thirsty New Yorkers circumvented the “Great Experiment” of Prohibition—like Long Island–based whalers who stashed rum below deck or a Bacardi bottling plant on West Broadway that sold investors liquid “shares.” (If the ’50s are your preferred time-travel destination, book a barstool at Bemelmans, the Upper East Side, upper-class fortress where one white-haired bartender has been shaking and stirring, uninterrupted, since 1958.)

But while some drinks are prized as a path to the past, other old elixirs are finding fame for the first time. Chef Michael Colameco has been ordering the Negroni for decades, often baffling bartenders—so he’s delighted that our appetite for Italian ingredients, combined with young drinkers embracing bitter flavors, has landed the magenta cocktail in rose-colored glasses all over town.

The couple who run Sakaya say saké deserves a similar spike. The tiny East Village boutique stocks premium bottles that will make you forget the sweet, mass-marketed product. (One customer says turning friends on to serious saké is like introducing top-quality craft beer to people who have only tasted Budweiser.)

But this issue also serves up stories about bottle businesses for which delectability is only one objective. Like Harvest Spirits, an upstate, orchard-based distillery that transforms surplus fruit into locavore liquid gold. Or Jenny & Francois, a wine importer that works only with natural vintners and has gotten New Yorkers to drink better in more ways than one. Talk with co-owner Jenny Lefcourt, and you get the sense that the additives in some conventional bottles make them the perfect pairing for a dinner of feedlot beef and genetically engineered potatoes.

But perhaps the most intoxicating idea in this issue is the brainchild of a young Frenchman who quit his cognac career, spent a year backpacking across continents, and came back determined to make fine spirits out of fair-trade ingredients. Today his vodka and liqueurs are beloved by some of the city’s best cocktail slingers, and the profits sustain small farmers from Mexico to Malawi. I’ll drink to that.