A source for spectacular seedlings. 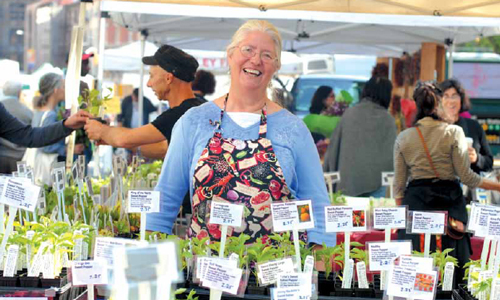 Funnily enough, one of the best spring arrivals at the Union Square Greenmarket isn’t edible…at least not yet. We’re referring to the little leek shoots, the tiny tomato plants, the rows of lettuce sprouts, and the thousands of other superior seedlings sold by Trina Pilonero of Silver Heights Farm Nursery.

Sure, plenty of other stands offer potted plants each spring.  But on Wednesdays and Saturdays, the Sullivan County–based farmer offers an array of seedlings so breathtakingly biodiverse, you might have to sniff some of her many medicinal herbs to recover from your wonder.

If Trina’s transplants look different from those plastic flats of basil plants everywhere else this month, its because they are. For starters, her stock is certified organic, but much more importantly she specializes in rare varieties that make for great city growing and unbeatable eating.

For 20 years, Pilonero has been a seed saver working to preserve and revive nearly forgotten heirloom plants. Her extraordinary biodiversity work got her an invitation to the international Slow Food meeting in Terra Madre in 2006, and her offerings include the rare specimens inducted into Slow Food’s Ark of Taste—like creamy Mississippi Silver Hull cow peas or the delicious speckled watermelon known as Moon and Stars.

Pilonero insists on seeds that are “open-pollinated” rather than hybrids, those crosses created by 20th-century scientists that now dominate agriculture everywhere. And in-the-know urbanites seek her out for her apartment-friendly options and her expert advice.  Her clientele includes an international group of gardeners, many begging her to hunt down a particular pepper or bringing her the seed itself to sow. (Her catalog even includes a write-in section for your wish list.) “I’m growing for Southeast Asians, Pakistanis, Indians, Middle Easterners, Greeks, Italian, Brits, Japanese,” says Pilonero, who works diligently to perfect the seedlings to our soils and climate, all without spraying or chemical fertilizers.

Any gardener can save heirloom seeds to grow year after year—but that isn’t the case with hybrids. To grow trademarked Sungold or Early Girl tomatoes, you have to buy them from the seed company each year. “We almost lost how to do it,” says Pilonero of the seed-saving knowledge that’s the foundation of farming.

She learned when she was just a sprout herself, helping her mother intensively farm an acre-and-a-half plot. Her father was in graduate school for much of her childhood, she says, and his lack of income meant those garden rows literally fed the family.

As an adult, the craving to cultivate stemmed more from boredom than necessity. She’d been a stay-at-home mom and, when her kids were in high school, she took a Master Gardening class through Cornell Cooperative Extension and was inspired to build a nursery. She initially focused on trees, shrubs and perennial flowers, but quickly switched from ornamentals to things she loved to eat: namely tomatoes.

In 1994 she started with a handful of heirloom varieties, specifically some little-known types that fruit quickly (Sullivan County has a short growing season) and pack incredible flavor.  She put an ad in the local paper but got little response. “I thought it was one of the dumbest things I’ve ever done. I begged people to buy my tomato plants.” Friends and neighbors eventually tried them, finding that unlike those skinny supermarket starters that produce lackluster crops (if you’re lucky), Pilonero’s plants yielded superior harvests—with spectacular taste.

Word spread, business took off, and Pilonero started selling at the Greenmarket eight years ago. Ever since, she’s been perfecting her stock for city folk, who have impressed her with their passion to grow whatever they can in the tiniest bit of room.

“I keep looking for things that will match somebody’s difficulties,” says Pilonero of plants that grow upright, thrive with little sun or withstand rough rooftop winds. She’s now got so many urban-appropri ate heirloom offerings that she supplies GrowNYC’s and Green Guerillas’ community gardening programs, the new Edible Schoolyard project in Brooklyn and public schools—all of whom receive a 50 percent discount.

Admittedly, some urban settings are harder to homestead than others.

So when would-be gardeners with windowless SoHo studios don’t come by asking for tomatoes and eggplant, Pilonero gives them sage advice. You can grow them, Pilonero jokingly replies, “but you have to move.”