Come not just for the waves, but for the schools of wahoo and mahi-mahi that run just off the shore. 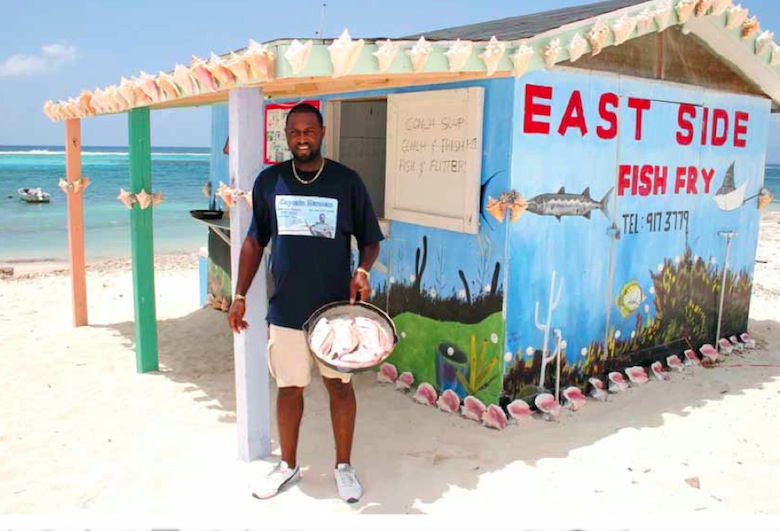 Image property of the Cayman Islands Department of Tourism

The stunningly azure water and pale white sands of the 22-by-8- mile island of Grand Cayman—the biggest sister in the Cayman Islands’ tiny three-sibling set—has long lured visitors from New York City. Not just for a pristine shore lined with casuarina pines and palms and thick-leaved thatches of mangrove, but for its lax ac- counting laws. (A whopping 600 banking and trust companies are officially headquartered on a landmass home to just 40,000 people.) But today Grand Cayman is betting that stressed-out Wall Streeters visiting their offshore accounts or Upper West Siders reef-diving for the first time will come not just for the waves, but for the schools of wahoo and mahi-mahi that run just off the shore and the bananas and mangoes that grow in Grand Cayman’s backyards.

The island’s best-known stretch is Seven Mile Beach, home to monumental resorts where guests have long guzzled frozen rum cocktails. (The classic Grand Cayman drink, funnily enough, is a Mudslide.) But these days those chocolate concoctions are joined by glasses of pinot gris, while the drinkers are dressing up to dine at increasingly sophisticated spaces like Westin Casuarina’s stellar Casa Havana (which boasts a 3,000-bottle cellar) or Blue, the Eric Ripert–run joint in the Ritz-Carlton. This January Ripert and Food & Wine magazine team up for their third annual Grand Cayman foodie fest, with plans to introduce hungry readers not just to Ripert’s riffs on redfish and wahoo, but also to authentic Caymanian food culture.

That begins with Chelonia mydas, the green turtle. Cayman’s culinary specialty, it’s found at nearly every restaurant—along with fat white squares of “fry bread” and creamy conch chowder. Cayman’s indigenous reptiles were once so plentiful Columbus named the islands Las Torugus, though now the majority are raised at the Cayman Island Turtle Farm, built on the western tip of the island when stocks of the species took a dip a half-century ago.

Green turtle meat is smooth and slippery and dark, its liver-like flesh a winner for those who favor the rustic flavor of game. It’s usually stewed with chiles and veg- etables into Grand Cayman’s national dish—but also appears in Caribbean curries and bite-size fritters as well as blissfully battered, fried and tucked in a bun for what the locals call a “turtle burger.” Order one, along with a lo- cal Caybrew lager, at the Cracked Conch waterfront bar just a few steps from the turtle farm, which is open to the public for tours. Like a cross between an aquaculture op- eration and Sea World, the farm produces nearly 2,000 of Cayman Island’s indigenous green turtles annually, in lagoons that dot the property. You can pick them up (at least the smaller specimens) at your own risk, or just eat them in the farm’s café.

Buses and cabs abound, but to really taste Grand Cayman, it’s best to rent a car. With your own wheels, you pull over at sandy knolls where fruit carts offer tiny red-blushed bananas; bunches of green guineps (genips); floral sapote and tangy starfruit; local mangoes in shades of green and red and orange; tiny lemons and limes, or coconuts whose tops have been hacked off for easy drinking with a straw. And be sure to stop when you spot an outdoor stand like Rankin’s Jerk Centre, where chile-laden jerk chicken, goat, lamb and beef are slow-cooked over wide kettle drums in between picnic tables and life-size plaster casts of cows. If you’ve got any kind of kitchen, head south from Seven Mile Beach to the docks in George Town, the Cayman capital where local fishers sell whole redfish and other local catch, their scaly bodies laid out in a row.