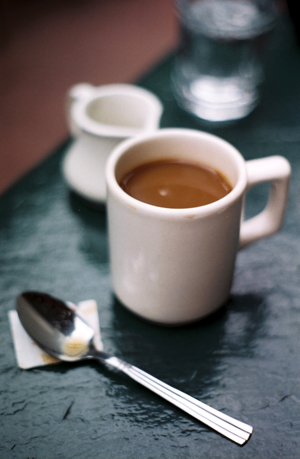 Before there was teen angst, there was Holden Caulfield and a bunch of phony bastards. His diet of cigarettes, cheese sandwiches, malted milk and rum-and-cokes captures the threshold between innocence and experience—and along the way provides a portrait of New York food in its own awkward adolescence. In honor of J. D. Salinger’s passing, here’s a toast of edible quotes excerpted from the much-beloved Catcher in the Rye, set in a 1950s landscape of lousy lunch counters and corny clubs we only wish we could have tasted.

Except for a few pimpy-looking guys and whory-looking blondes, the lobby was pretty empty.  But you could hear the band playing in the Lavender Room, so I went in there. It wasn’t very crowded but they gave me a lousy table anyway-way in the back. I should have waved a buck under the head-waiter’s nose. In New York, boy, money really talks-I’m not kidding.  The band was putrid. Buddy Singer. Very brassy, but not good brassy-corny brassy. Also there were very few people around my age in the place. In fact, nobody was around my age. They were mostly old, show-offy-looking guys with their dates. Except at the table right next to me there were these three girls around thirty or so. The whole three of them were pretty ugly, and they all had on the kind of hats that you knew they didn’t really live in New York but one of them, the blonde one, wasn’t too bad. She was sort of cute, the blonde one, and I started giving her the eye a little bit, but just then the waiter came up for my order. I ordered a Scotch and soda, and told him not to mix it-I said it fast as hell, because if you hem and haw, they think you’re under twenty-one and won’t sell you any intoxicating liquor. I had trouble with him anyway though. “I’m sorry, sir,” he said, “but do you have some verification of your age? Your driver’s license, perhaps?” I gave him this very cold stare, like he’d insulted the hell out of me, and asked him, “Do I look like I’m under twenty-one?”

“Okay, okay,” I said. I figured the hell with it. “Bring me a Coke.” He started to go away, but I called him back. “Can’tcha stick a little rum in it or something?” I asked him very nicely and all. “I can’t sit in a corny place like this cold sober. Can’tcha stick a little rum in it or something?” “I’m very sorry, sir,”‘ he said and beat it on me. I didn’t hold it against him though. They lose their jobs if they get caught selling to a minor. I’m a goddam minor.  …It was one of those places that are very terrible to be in unless you have somebody good to dance with, or unless the waiter lets you buy real drinks instead of just Cokes. There isn’t any night club in the world you can sit in for a long time unless you can at least buy some liquor and get drunk.  Or unless you’re with some girl that really knocks you out.

After I put my bags in one of those strong boxes at the station, I went into this little sandwich bar and had breakfast. I had quite a large breakfast, for me-orange juice, bacon and eggs, toast and coffee. Usually I just drink some orange juice. I’m a very light eater. I really am. That’s why I’m so damn skinny. I was supposed to be on this diet where you eat a lot of starches and crap, to gain weight and all, but I didn’t ever do it. When I’m out somewhere, I generally just eat a Swiss cheese sandwich and a malted milk. It isn’t much, but you get quite a lot of vitamins in the malted milk. H. V. Caulfield. Holden Vitamin Caulfield.

While I was eating my eggs, these two nuns with suitcases and all-I guessed they were moving to another convent or something and were waiting for a train-came in and sat down next to me at the counter.

… One was reading a little black book while she drank her coffee. It looked like the Bible, but it was too skinny. It was a Bibletype book, though. All the two of them were eating for breakfast was toast and coffee. That depressed me. I hate it if I’m eating bacon and eggs or something and somebody else is only eating toast and coffee.

We took off our goddam skates and went inside this bar where you can get drinks and watch the skaters in just your stocking feet. As soon as we sat down, old Sally took off her gloves, and I gave her a cigarette. She wasn’t looking too happy. The waiter came up, and I ordered a Coke for her-she didn’t drink- and a Scotch and soda for myself, but the sonuvabitch wouldn’t bring me one, so I had a Coke, too….When I left the skating rink I felt sort of hungry, so I went in this drugstore and had a Swiss cheese sandwich and a malted, and then I went in a phone booth.