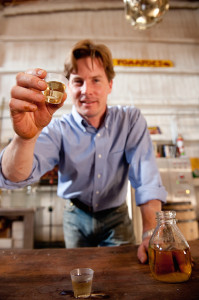 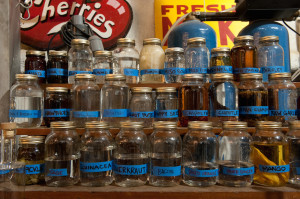 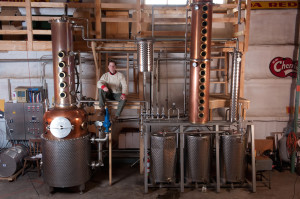 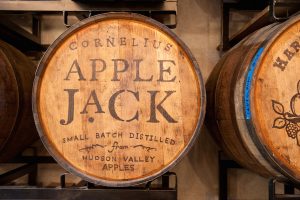 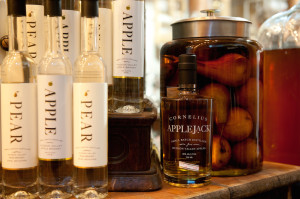 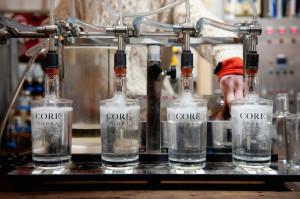 Walking into the shop at Harvest Spirits up in the Hudson Valley feels like stepping into a mad scientist’s laboratory. At one end of the room sits a tank big enough to swim in, surrounded by a maze of pipes and smaller tanks. One wall is lined with oak barrels, each decorated with a different, and often mysterious, symbol. Behind the sales counter, which is crowded with bottles of spirits to sample, stands a row of shelves filled with jars of poisonous-looking mixtures. Read the labels—wormwood, bacon, cilantro, dill pickle, frozen beer—and you might wonder if you really want to buy anything at all here.

Welcome to one of New York State’s newest—and most innovative—distilleries. Harvest Spirits is the brainchild of 38-year-old Derek Grout, whose family has owned Golden Harvest Farms and its attendant farm stand since his city-slicker grandparents moved up to Valatie from Queens more than 50 years ago and became apple growers.

Over the years, the family has added a few annual crops, put in more buildings and quadrupled the acreage (from 40 to around 200), but it’s still basically an orchard. Grout, who is one of five sons in the family, had pursued a career in graphic design; but one day, as he was pondering a return to the farm, a friend casually mentioned that he’d come across a place in New Hampshire that was making vodka from apples. “That was all he needed to say,” says Grout.

At the time, Grout knew nothing about fermenting, nothing about distilling and nothing about the liquor industry. And he was looking at a total startup cost of around a quarter of a million dollars. “It was a little scary,” he admits. “And I’m sure a lot of people rolled their eyes.” But if there was one thing Grout had in overflowing abundance, it was apples. “And I figured if we had enough apples, sooner or later we’d make a good-tasting product.”

Five years later, Harvest is selling about 12,000 bottles a year of its Core Vodka, Cornelius Applejack and pear brandy to buyers all over New York State. (The company is not licensed to sell across state lines.) It’s also won a few medals, including a double gold for the applejack at the 2010 San Francisco World Spirits Competition. And it’s eking out a slim profit.

Here in the Big Apple, you can sample Harvest’s products at restaurants like Back Forty, Fred at Barney’s and the Noho Star. Or you can buy a bottle at more than two dozen Manhattan liquor stores, from big players like Astor and Sherry-Lehmann to specialty boutiques like Downtown Cellars, whose owner, Seth Datz, has a house upstate not far from Grout’s place. Datz was a farm stand customer, and when he heard they were making vodka—neighbors were buying it as Christmas gifts—he rushed over to pick some up for his Liberty Street store.

Since then, Grout’s come down to the city for some very successful tastings. “It’s nice to have an actual person come in, selling his own product from his own farm,” Datz says. Competing against the big mainstream vodka brands “has got to be tough,” he adds, “but Derek holds his own.”

Grout jumped at the idea of apple vodka for one simple reason: His family farm’s 20,000 trees produce many more apples than the farm stand can sell. And even when they process them—which they do—there’s a limit to how many jugs of cider, apple pies and cider donuts its customers can consume. Even if the farm stand does sell 12,000 cider donuts on a busy day. What’s more, all those products—like the apples themselves—have one huge disadvantage: They don’t last long. “You can make pies, donuts, or you can freeze them, but they’re never quite as good as fresh. And cold storage costs you money,” Grout says. But once distilled and sitting in a barrel, the apples just get more valuable. “I don’t know any other way of processing an apple where the apple pays its own rent.”

Grout quickly became fascinated by the distilling process, and particularly by the almost complete control it gives the distiller over the flavor of the finished product. Basically, distilling’s pretty simple: You take an alcoholic mixture (wine, say, or hard cider or, in Grout’s case, fermented mashed apples) and bring it up to a simmer. Since alcohol boils at a lower temperature than water, you capture the vapors that first come off the boiling liquid; cool them and you’ve got alcohol. (Warning: Don’t try this at home. Some of what you get is poisonous.)

What makes distilling fun, though, is that by controlling the distance the steam travels in the process of cooling, you control the amount of impurities—otherwise known as flavor—it contains. So to make his apple vodka, which is just barely reminiscent of apples, Grout sends the steam as far as he can, through a long chimney-like column. For the pear brandy, which tastes intensely of the pears it’s made from, he uses a short column. But there’s more. Send your spirits on a second or third trip through the still and the flavor gets even cleaner. Or try infusions: Soak peaches in vodka (as Grout is doing for a peach schnapps he’s working on) and you get one flavor; then age it in oak barrels and you get quite a different one. Grout’s vodka and his applejack both start off with the same apples, but by double-distilling the applejack and then aging it in oaken bourbon barrels, he produces something closer to a whiskey than a vodka. And that cilantro mixture on the shelf? He started by soaking the fresh herb in the vodka, yielding a bitter, bright-green liquid. But distilled, the color disappears —along with the bitterness. The result is a clear liquid with such a pure, intense cilantro flavor and aroma that you may start looking for some guacamole to spike with it.

Like most of Grout’s experiments, the cilantro vodka may never go into production. After all, the farm’s not suffering from a cilantro glut. But take the black raspberry vodka Grout’s getting ready to introduce. He concedes it doesn’t look, on the face of it, to be a smart competitive move. “Why should we do a black raspberry vodka at $30 a pint,” he asks, “when Stoli has a very good raspberry vodka that goes for $20 a bottle? Well, because we’ve got a surplus.” There’s an enormous patch of black raspberry bushes right outside the distillery, and customers’ appetite for the small, seedy fruit is limited. So Grout soaks the raspberries in apple vodka and then re-distills the mixture. “It’s a beautiful purple color, and has the most profound raspberry flavor, but no sweetness.”

Another soon-to-launch product is Italian-style grappa. “I didn’t get into grappa because I thought I could do it better than the Italians,” he says. But a neighboring winemaker’s trash—leftover grape skins and seeds—looked to Grout like an opportunity. He uses them to make what he calls a poor man’s wine, and then distills it. His peach schnapps is the fruit of another such windfall: A neighbor had a crop of flavorful but mealy—and thus unsalable—peaches. And when he can’t get fruit for free, Grout will barter for it; last year, upstate farmer (and former New York governor) Eliot Spitzer traded a bin and a half of pears for a case of Grout’s spirits. (Grout’s aversion to waste extends to his own waste products. One of the by-products of the distilling process is a form of alcohol that’s undrinkable but very, very flammable. “You can put that alcohol in a lobster pot and light it, and it’ll burn like a big can of Sterno,” he says. “It’s better than a campfire.”So he’s looking at using that, along with the farm’s generous supply of apple wood, to run the still. Think locavore Duraflame.)

From farm boy to distiller may seem like a leap, but for Grout the spirits are all a means to an agricultural end. “The purpose of the [distilling] business,” he says flatly, “is to use the surplus apples from our farm, and thereby preserve our way of life, our agricultural heritage and our farmland.” Grout and his wife, Ashley Hartka, who handles the books, have a one-year-old son. “I want the farm to be around when Theodore gets older,” he says, “so that he can have the choice of whether to farm or not.”

But while the farm’s bottom line might be Grout’s ultimate objective, it’s clear that distilling is more than just a day job. “Every morning when I walk in I’m hit with the smell,” he says: “slightly alcoholic, slightly funky, definitely oaky. It’s a place with potential, the potential to make something that’s really brilliant.”