The eminent ecologist on why you should save your leftovers, eat more mangoes and call your elected officials. 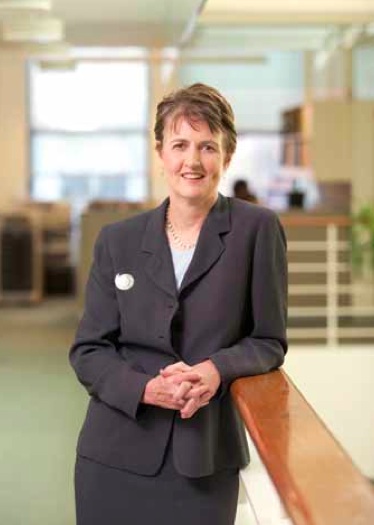 Frances Beinecke is president of the Natural Resources Defense Council. One of the country’s most influential environmental action groups, the NRDC and its million-plus members tackle today’s biggest environmental challenges. But despite spending more than 30 years in the trenches with climate change, extinction and pollution—President Obama appointed her to the national commission on the BP oil spill—Bronx-based Beinecke calls herself an optimist.

EM: Tell us about your eating habits.

FB: As it happens, after trying to get my three daughters to eat right while raising them, they’ve now become a big influence on me. They’re millennial kids and very aware of the impact factory farms and meat production have on the environment. So they’ve inspired me to eat less meat. A big step toward doing that involved starting a vegetable garden, another passion of theirs. I enjoy both the work and the literal fruits of our labors. Sometimes I like watching the food grow so much, I hate to pick it!

EM: When you’re not eating from your garden, what do you like for dinner?

FB: The best part of New York is all the ethnic neighborhoods all over the city. One daughter is a foodie, another is an artist, so we match up art shows with neighborhoods across Queens and Brooklyn and the Bronx, where we live. Italian on Arthur Avenue, Indian in Jackson Heights, slow food in Park Slope.

EM: Your work takes you around the world. Any great meals between meetings?

FB: I always want what’s local. Recently we were in Turkey and the fresh fish was amazing!

EM: How might our readers eat their way to a smaller carbon footprint? (Other than obvious actions like cutting out produce shipped from other hemispheres or factory-farmed meat.)

FB: People are becoming much more conscious of the ways our food system contributes to climate change, but food waste is still a big problem. Americans waste 40 percent of [our] food. Rotting in landfills, it releases 10 percent of all anthropogenic methane emissions, which has 25 times the global-warming potency of carbon dioxide. Unlike San Francisco, New York City lacks a citywide composting system, meaning it’s up to us to eat what we cook or order—and save the leftovers.

EM: Okay, we don’t have municipal composting like San Francisco. Any good news about our urban environment?

FB: Beehives have recently been legalized in the city—we have one on the NRDC rooftop—and Just Food’s City Chickens project [helps] New Yorkers get egg-laying hens.

EM: I’ve personally been trying to save the world by eating right.  But would all those hours making stock from onion peels be better spent writing my reps in favor of cap and trade legislation? Is lifestyle or policy the better path to an improved food system?

FB: This is not an either/or question. We absolutely need to make food policy improvements that will reduce our climate change impact, but everyone can help by improving the decisions we make in our daily lives.

There are two key policy issues that citizens can support in strengthening New York’s local food system. The first is to revitalize the Hunts Point Produce Market in the South Bronx—one of the largest in the nation—to expand opportunities for New York farmers to sell their products to supermarkets, restaurants and other wholesale vendors. The second is to secure sufficient government funding to help protect our remaining farms. We are losing an average of 70 acres per day of farmland in New York. For both of these issues—Hunts Point and farmland protection—we need the support of state and federal elected officials.

EM: This interview will appear in our “Eat/Drink Local” issue. What do you think of the locavore revolution?

FB: Really, a green diet is more about diversity and seasonality than locality. It is about being conscious of your food choices and their impact on the environment. Although I do know folks who are living the locavore, seasonal lifestyle, it’s just as important to maintain the health of tropical rainforests by supporting sustainably harvested rainforest goods such as organic and fair-trade certified coffee. Seventy percent of previously forested land in the Amazon is occupied by pastureland for cattle today. Meanwhile, in Indonesia forests are disappearing at a rate of more than two million hectares a year—an area half the size of Belgium—to make way for palm oil plantations. This is severely damaging to the environment, forest peoples and the climate.  So we need both to consume less beef and palm oil, which is found in processed foods as well as personal care products, and buy rainforest products that provide an economic incentive for the preservation of forested land, like Rainforest Alliance–certified mangoes and tea (not to mention coffee and chocolate).

EM: You’re faced with terrifyingly bad news on a daily basis. What gives you hope?

My daughters and their generation. They are pushing all of us to take more responsibility and live well for the planet and the generations to come. And their enthusiasm for sustainable food, for farmers markets, is an encouraging sign of people connecting more personally to the environment around them, and that local connection makes people care and act on behalf of the planet’s future.