A slice of Williamsburg in East Harlem. 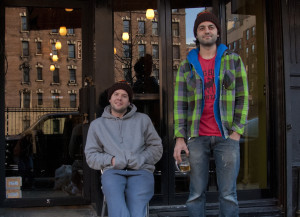 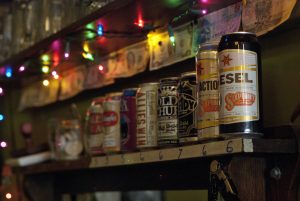 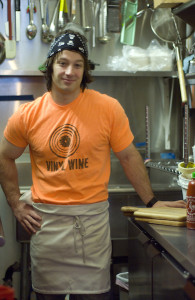 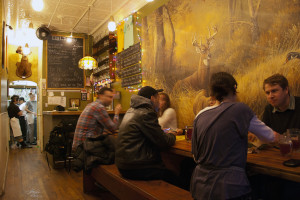 The culinary inspiration for Earl’s Beer and Cheese—a tiny beer bar high up Park Avenue where the Upper East Side meets Harlem—came from an unlikely source: the New York State Liquor Authority.

Earl’s was conceived as a bar, but in order to obtain a license, the place needed to serve food. For a while the two owners told themselves that if anyone ordered a grilled cheese sandwich, one of them would hop into the kitchen. Countless satisfied customers and many rave reviews later, the owners of Earl’s (and their chef) are very happy they didn’t choose to go in that direction. “In retrospect, the thought of Adam or me behind the grill or in the kitchen terrifies me,” says Mike Cesari, who co-owns the place with Adam Clark. “Thank God we came to our senses and hired a chef.”

That would be Corey Cova, who calls Earl’s culinary style “cheese-focused, fat-kid comfort food.” Think Calabro mozzarella, miso mayo, housemade dill pickles and a few potato chips on a Thomas’ English Muffin, or beer-cheese spread with cheddar, Sriracha, garlic and Schaefer lager on toast. “If I was going into a bar,” jokes the cook, a former chef at Momofuku Ssam Bar, Morimoto and, in another universe, Pure Food and Wine, “this is what I would eat.”

He’s a good choice for Cesari and Clark, who played hockey together as kids west of Binghamton in Elmira, New York, which Clark fondly calls the “bar food capital of New York.” They reconnected later in life, realizing both had unfinished screenplays: “That kind of progressed into the unfortunate realization that neither one of us was likely to break into screenwriting anytime soon,” says Cesari, “and that maybe we should look into starting a business instead.”

Cesari is also a co-owner of the nearby Vinyl Wine Shop, the combination record-and-bottle shop that opened in 2009. (It recently moved two blocks south on Lexington Avenue, closer to Earl’s.) Cesari has lived in East Harlem for seven years, and is something of a local hero for opening that much-needed wine shop. Earl’s fills a similar neighborhood niche, though East Harlem wasn’t the first community of choice for the pair, who looked in the East Village and north Brooklyn before settling on bringing the spirit—and great beers—of those two neighborhoods to Cesari’s own. “It’s a slice of Williamsburg on Park Ave,” says Ethan Buchsbaum, who lives nearby and has been to the bar half a dozen times.

That it is: One wall is covered in a stick-on mural of a woodland scene like you’d find in some suburban wood-paneled basement. The name Earl’s is partially inside joke. “When the crafty real estate cretins were trying to attach the über dubious acronym ‘SpaHa’ to East Harlem, I thought ‘Earl’—‘East Harlem’ mashed up and without the ‘H’—was a much cooler handle for the neighborhood,” says Cesari. Earl also sounded like the right name for the working-class guy that the bar’s outdoorsy hunting theme suggests. The remaining walls, painted olive green, display a painting of a pig with a top hat and antlers, a vintage bowling poster, and chalkboard panels listing the menu—Cova works with local purveyors and frequents the farmers market to get his goods—and the beers on tap like Anderson Valley, Avery, Belfast Bay, Southern Tier, Smuttynose and the brand new pale ale from Bronx Brewery, found just across the Third Avenue Bridge.

Drew Hale bartends at Earl’s when he’s not working as an actor. He’s got a great commute. He lives in an apartment above the bar. And regulars don’t travel much farther to get here. From its Park Avenue perch overlooking Metro-North trains as they emerge from underground and hurtle toward the burbs, Earl’s draws locals desperate for a great bar: the Mount Sinai Medical after-work crowd, and Upper East Siders who’ve read about the good beer and better cheese. Most nights, it’s packed, though that’s easy to achieve—the slice of a space on Park Avenue near 97th Street can barely seat 20.

The kitchen, in the back, is the size of a walk-in closet. In front, customers crowd along a long communal table made of an old bowling alley floor and at a handful of stools at the bar, or squeeze in among narrow spaces left over. A concierge from the Plaza Hotel recently called seeking a reservation; two of Earl’s regulars laughed along with the bartender as he tried to explain the seating arrangements. Your best bet for a seat yourself is probably at lunch, now that Earl’s is open in the daytime.

Luckily, chef Cova is used to tight quarters. Before training at the Culinary Institute of America and working at a slew of restaurants in New York City, the California native was in the Navy, cooking on the submarine USS Jimmy Carter. A gold-plated wooden plaque behind the bar at Earl’s commemorates his service. (These days his military build is softened by his low-key attitude and habit of wearing bandanas in his longer-than-regulation brown hair.) Cova moved to this unknown uptown bar from Momofuku, he says, because “I wanted to prove that I was a competent kitchen manager.” To that end he’s now turning out not just grilled cheese sandwiches (a New York State Cheddar, kimchi, fried egg and pork belly on sourdough that’s a nod to his time under Chang; a double-cream brie with blackberry mostarda and fried rice paper on brioche) but more substantial food.

He also offers “the world’s fanciest waffle,” a slab of Hudson Valley foie gras grilled with a checkered pattern to mimic a waffle iron, with aged Cabot Cheddar and coffee-cured bacon on an Eggo Waffle (beloved by regulars and reviewers). The “Earl’s Taco” is a scallion pancake filled with braised pork shoulder and topped with radish, cilantro and queso fresco (unwieldy but worth the effort). A cool-weather favorite is the hearty root-vegetable chicken potpie with a whole chicken leg sticking out through the crust. (Rest assured there’s a bit of cheese in there as well.)

You don’t expect such a “creative and thoughtful menu from a bar,” says Anne Saxelby of Saxelby Cheesemongers, one of their curd connections. She calls the place “the little bar that could.”

Diners can wash down Cova’s creativity with a dozen canned beers, and a small selection of wines from Vinyl and with one of the ever-rotating beers on tap: The brews are heavy, often high in alcohol to stand up to the rich dishes, which the staff will very nicely tell you they won’t modify. (Sorry, vegans.) The guys at Earl’s aren’t so rigid with social activities. They have experimented with running groups, steak tartare and trivia nights, to different levels of success. One of their more fruitful enterprises was a wine and food pairing series, which became the inspiration for Cesari and chef Cova’s next joint pursuit, a wine bar named ABV , to open around the corner on Lexington any day now. Cova expects a version of the tartar to end up on that menu. He’ll continue to direct the food at Earl’s, but won’t be cooking in the tiny kitchen as often. Clark, meanwhile, has just turned the empty space next door to Earl’s into the Guthrie Inn, focusing on cocktails.

If customers are willing to hop back and forth it may quell their only regular complaint: the lack of space.