From bitters builders, a bar. 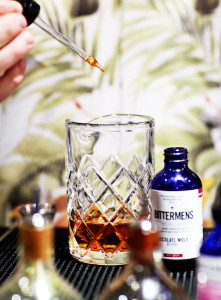 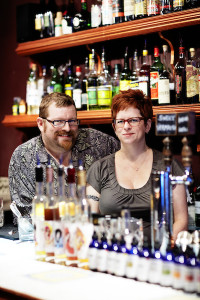 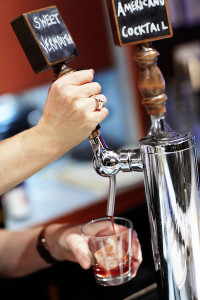 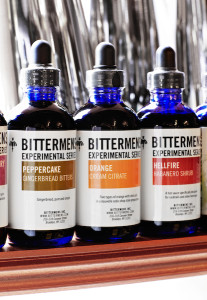 Monday night is industry night at Amor y Amargo, the tiny East Village bitters bar that opened last March. The elbow-room-only space, which accommodates 10 to 15 guests at a time, has become like cocktailian catnip, attracting off-duty bartenders, chefs and thoughtful tipplers of all persuasions. The room feels like a cross between a tapas bar (the proprietors resided in Madrid for a couple of years before returning to New York) and a cozy cocktail cocoon, furnished with Spanish tiles, a warm copper ceiling and a thoughtfully placed mirror that appears to extend the tiled bar, the clear centerpiece of the room. Some come to unwind, fortified by Americano cocktails on tap; even the walls emanate a warm vermouth-like burgundy glow. Others arrive to stock up on Japanese mixing glasses and esoteric bitters from the “Bittermens General Store” (truly just a few well-edited shelves in the window). But especially on Mondays, most clients have come to solicit advice from Avery and Janet Glasser, the husband-and-wife team who created and manage the bar—and who found fame with their Brooklyn-based bitters biz Bittermens, Inc.

Cocktail bitters, those tinctures infused with herbs, spices and other flavorful elements added by the eyedropper to mixed drinks, have ridden shotgun on the cocktail renaissance of the last several years. And as drinks have grown ever more fanciful, demand for innovative ingredients has grown, creating a bull market for bitters. And Amor y Amargo is the bitters mothership.

On a recent Monday, executives from Japanese whiskey maker Suntory and French Cognac producer Royer arrived together. The Royer rep asked Avery to experiment with different bitters to see which melds best into a Cognac cocktail. The Suntory exec produced two unlabeled bottles of a yet-unreleased liqueur and requested an opinion on which formulation Avery prefers. Avery and Janet slide glasses back and forth across the bar, correctly identify the spirit (a plum liqueur), dissect the flavors aloud (“honey,” “nuts—this would be great with the Squirrel Nut Bitters”) and finally render a decision. The Suntory exec sips and nods gravely.

The Glassers have come a long way from their days tinkering in a home kitchen. Back in 2007, the couple began developing bitters just for fun, often gifting them to the bars they frequented, including Death & Co. “Phil Ward, who was the bartender at Death & Co, said, ‘If you can get us enough bitters, we’ll put them on the menu in cocktails,’” Avery Glasser recalls. They first developed the Xocolatl Mole bitters (chocolate-chile pepper), which remain on the Death & Co. menu today. “Now everyone does one,” Glasser laments of the chocolate-spice bitters category. “I want to say, ‘Do something new.’” That’s a standard he holds himself to as well—for example, he refuses to make orange bitters. “Unless we can do something significantly different, I’m not going to do it,” he insists.

That drive to innovate has spawned delightfully offbeat flavors such as Burlesque (hibiscus, tart açai and long pepper, encouraged for dashing into a Negroni) and that Squirrel Nut (pecan vanilla). With their new 880-square-foot factory over in DUMBO, Bittermens has become the third-largest bitters maker in America, behind Buffalo Trace (which makes Peychaud’s and Regan’s) and Fee Brothers. (The number-one seller in America, Angostura, is not made in the United States.)

Last October the Glassers added a citric-acid-based Orange Cream Citrate and two vinegar-based shrubs, the light Orchard Street Celery and the fruity/fiery Hellfire Habanero Shrub (the latter two are both used in the Scandi Gibson cocktail, along with aquavit and Cocchi Americano). And they simultaneously rolled out a line of spirits ranging from bright cinnamon to bracingly bitter grapefruit—“flavors we couldn’t get here but wanted.”
“We want to see what happens when you distill cacao, or chile peppers, or botanicals,” Glasser explains, lighting up at the prospect. “We wanted more space to work on experimental stuff,” while a partner upstate will continue the “large-batch” distilling of the Bittermens spirits line.

Of course, all their products are behind the bar at Amor y Amargo (which translates as “Love and Bitters”). The most popular drink on the menu is the house Gin & Tonic, made with their quinine-laced Commonwealth “tonic cordial” mixed with soda water, Bittermens Hopped Grapefruit Bitters, Maraschino liqueur and, oh yeah, gin. The drink was named one of Time Out New York’s 100 Best Dishes and Drinks of 2011.

Interestingly Derossi Global—the same entity that owns Death & Co., where their bitters first found favor—played a role in the conception of Amor y Amargo as well. Derossi also owns Cienfuegos, nearby on Avenue A, where a friend of the Glassers, Mayur Subbarao, ran the bar program. Subbarao drew their attention to the empty storefront on East Sixth Street, formerly a Cuban sub shop. “He asked us, if we could put anything here, what would it be?” Avery recalls. “We said, ‘A bar supply shop, since all the bartenders nearby run out of things.’” Then he added, “‘It has a liquor license,’ and we immediately said, ‘A bitters bar!’”

As spirits company proprietors, the Glassers are legally prohibited from also owning a bar. So they’ve partnered with Derossi, who owns Amor y Amargo—another brick in his East Village saloon empire. But it remains unclear how long Amor y Amargo will last; the Glassers refer to it as a “pop-up concept,” and Derossi doesn’t list the entity on his Web site along with his other ventures. The project may be ephemeral—one of the many glimmering limited-time-only phenomena among Manhattan’s storied bar history. Knowing that this quinine-scented industry handshake of a bar might shutter at any time—this is bittersweet knowledge indeed.