The best new restaurant in the entire country, in more ways than one. 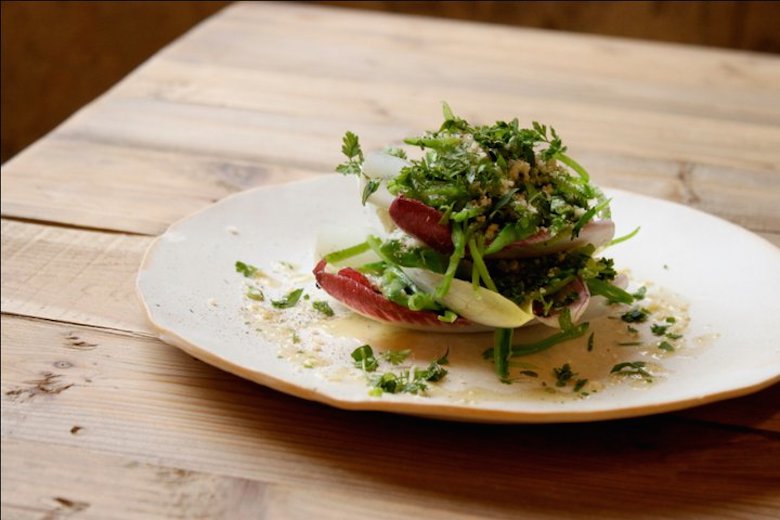 UNION SQUARE—In truth, ABC Kitchen with Jean-Georges—the restaurant that’s shared the ground floor of ABC Carpet & Home for the past year—didn’t have to be so good. It’s likely a shot of fresh wheatgrass juice and a whole-wheat brick-oven pizza would’ve have satisfied the built-in audience of artsy shoppers in that famous fabulous furnishings store, not to mention all the Greenmarketeers who have worked up an appetite for something other than cider donuts and Starbucks.

There are fat trenchers of olive-oil fried toasts topped with heirloom tomatoes and a creamy aioli, or sweet Maine peekytoe crab and a spike of chile and lemon; a wedge of silky slow-cooked Arctic char floating in a basil-flecked carrot broth in a hand-formed white porcelain bowl. It’s served in a sleek open space, casual but cool, all crisp whites and salvaged wood, curated by the ABC Carpet & Home team. And we’re not the only ones singing the place’s praises: This spring the James Beard Foundation declared ABC Kitchen to be the best new restaurant in the country.

Note that the award wasn’t just for their food: It’s also to a place, as the Foundation puts it, “likely to have a significant impact on the industry in years to come.” Because while plenty of Manhattan menus talk up the provenance of their turnips and otherwise strut their sourcing, ABC Kitchen was designed not just to be as pretty as the shop it shares, but to share its mission in pushing the boundaries of sustainability. Their goal is to prove it can be done profitably at a price point far below that of Jean Georges, and a place staffed by dozens of cooks and servers, not solely by a dedicated husband-and- wife team working ridiculous hours in a 20-seat spot.

That’s why the official best new restaurant in the country may source some of the city’s fanciest artisanal and farmstead products, but unlike the uptown experience of Jean Georges, your server doesn’t deliver foie gras brûlée with candied sour cherries, but rather a thick schmear of chicken livers on a wedge of Sullivan Street white. ABC Kitchen serves perfectly puffy-crusted pizzas (topped with Hudson Valley mushrooms, fresh oregano and a fat, amber-yolked egg); offers a $25 three-course prix-fixe lunch; does nearly 1,000 covers on a good day; and serves everyone from shoppers in ball caps by day to cocktail-swilling scenesters by night.

And to make sure the chic tucking into Jean-Georges’s fried chicken are served up at least a little bit of agricultural education along with their crispy-skinned thighs (plated with wild greens called lamb’s-quarters, a little basil and some homemade hot sauce butter) each day the staff pile up a stunning produce display on what would have been one of the dining room’s better stations. Called the “market table,” it holds court just outside the kitchen door with an overflowing cornucopia of lemon cucumbers, purple carrots, French breakfast radishes, towers of tomatoes or budding bouquets of flowering Thai basil, the majority of it bought literally one block away. (Originally it was all supposed to be pickled, brined, roasted and poached as part of an antipasto table, says Kluger, but when the crowds poured in, he quickly realized that he’d never have time to keep it filled.)

It goes without saying that ABC Kitchen is no more the first mainstream business to go green than it is the first to pair spinach and goat cheese. But the former honor might well go to the furnishings showplace in which it resides. ABC Carpet & Home began when Sam Weinrib opened a carpet store way back in 1897. In 1961 Sam’s grandson Jerome took over, adding the “Home” and moving the shop to 18th Street; Jerome’s daughter Paulette Cole arrived in the 1980s, bringing with her a desire to inspire global change through commerce.

“They were green before it was a color,” recalls Phil Suarez, who has managed several of ABC Carpet & Home’s on-site restaurants in addition to partnering with Vongerichten. For example, ABC doesn’t just ask their furniture vendors to change the way they source wood—they went so far as to partner with the Rainforest Alliance to create a groundbreaking certification program called “goodwood” to ensure wood products are made with lumber harvested only from the world’s well-managed forests. “The whole point is to throw in the pebble,” says Cole, now CEO of the shop and a partner in the restaurant, “and create the ripple.”

Given the way the shop’s longtime core values combine luxury and ecology, it was kind of a no-brainer to expand that ripple to the restaurants ABC ran. The space where ABC Kitchen lives has been home to several successful places (including Lucy Latin Kitchen and Lucy of Gramercy, both run by Phil Suarez) that fit the shop’s global theme, but they decided to create a destination restaurant that, like the store, was also a paragon of sustainability. “It’s always been in the back of my mind to do something in their mindset,” Suarez says of the kitchens he has helped run in the building. Vongerichten, his long-standing partner, was the natural choice to come aboard.

Like most of Manhattan’s four-star cooks, the French-born chef is a lifelong locavore who has long sought out smaller purveyors like “the lobster lady” up in Maine who sends down not just lobsters for Restaurant Jean Georges but those tiny crabs destined to top ABC Kitchen’s toasts. Nearly 20 years ago, long before mache became mainstream, the chef was already working with local farmers to grow his own specialty crops. The farm-forward results of their partnership “are not new,” admits Vongerichten, “but we did push the boundaries.”

He’s referring to the environmental commitment of the entire place—not just the plates—some kind of Al Gore–approved fantasy dining experience complete with low-wattage light bulbs, recycled corrugated cardboard coasters, and plans for both a composting program via their waste management service and a garden on the roof. Even the servers’ matching plaid shirts were bought used.

The restaurant’s “standards and commitments” are listed—and listed and listed—on the back of the menu, in language that could be an Onion spoof of an eco-eatery: “Consciously sourced ingredients, locally grown seasonal fresh produce, organic small farms, cruelty- free/humanely treated livestock, meat, fish and dairy that is locally sourced where possible, free of pesticides, synthetic fertilizers, insecticides and GMOs, teas, coffees, spices, organic wines, juices and elixirs that are organically cultivated on fair trade cooperatives, celebrating and honoring sustainability, artistry and our global diversity.”

The list may seem laughably long, but it’s rooted in actual rules. “When we started, [the principles] signed a contract,” says Cole, referring to a list of green guidelines—which is now targeting a goal of 80 to 90 percent local produce from May to October—that chefs, restaurateurs and store owners agreed to follow. And while plenty of seafood, pork, lamb and beef make the menu—the burger, made from a small breed called American Akaushi and topped with Connecticut’s Cato Corner aged Bloomsday cheese, is one of their better sellers—it’s usually just a component of a plate, rather than the star. While ABC Carpet & Home tend to the lightbulbs and glass- ware, the food, of course, is the job of Vongerichten and Kluger. As at all Vongerichten’s restaurants, here the chefs’ skills shine, though the food is far less complicated than what you’d find at Perry Street or Restaurant Jean Georges. In fact, nearly half of the original menu was based on what Vongerichten makes at home—toasts slathered with pureed peas, lemon and a bit of olive oil; a carrot-avocado salad dressed with seeds and nuts and sour cream and citrus; a bowl of kasha and bowtie pasta with little veal meatballs. “When you go to Jean Georges or Per Se,” says Kluger, “you go ‘Oh, my God, how did they do that?’ Here it’s more like, ‘I want to go back and eat it again.’” That means a dreamily creamy chicken liver mousse toast gets a spike of citrus; a ginger-mint marinade for the mackerel sashimi is dosed with chiles; basil perfumes the fried chicken. Raw scallops are shaved paper-thin and float in a sparkly broth of apple juice, mint and lime; a bowl of striped beets is soaked in homemade yogurt with a brace of citrus and green olive oil.

“I always say I want to create food addictions,” says Vongerichten of this food, “things that make people come back.”

To that end, Kluger tweaks the toasts, topping them with braised nettles, pickled ramps or pureed kabocha squash and olive oil, depending on the season, fiddles with the herbs astride the rich ricotta ravioli, running variations by Vongerichten for tasting and tinkering, a challenge considering the chef owns kitchens in three countries. He typically stops by at least once a week, says Kluger, who will have two or three tastes at the ready. It works, likely because Kluger was an obvious choice to lead ABC Kitchen practically from the moment the two chefs were introduced—at the Union Square Greenmarket, of course.

Kluger, then working as the chef at a private club after a six-year stint at Tabla, recalls: “I was at Berried Treasures, buying eight cases of tomatoes.” Indeed, if you talk to the chef for any length of time, the conversation is woven with references to local farmers like Rick Bishop of Mountain Sweet Berry Farms or Tim Stark’s famous Eckerton Hill chiles: The restaurant buys from 50 or 60 farmers and purveyors, says Kluger, some he’s worked with for more than a decade. Most mainstream kitchens, he explain, are more likely to work with just a dozen.

So the restaurant’s grower-centric guidelines are no challenge for Kluger—in fact, he wishes he could be even more strictly locavore: “I guess I had a little bit of this pipe dream about grinding my own grain,” he laughs, referring to the dough that gets tossed into hundreds of wood-fired pies, “but we go through 50 pounds of wheat flour in a week.”