Until we know more about the full impact of these products on humans and on the planet, the jury is still out on whether they will be celebrated, feared, avoided or ignored. 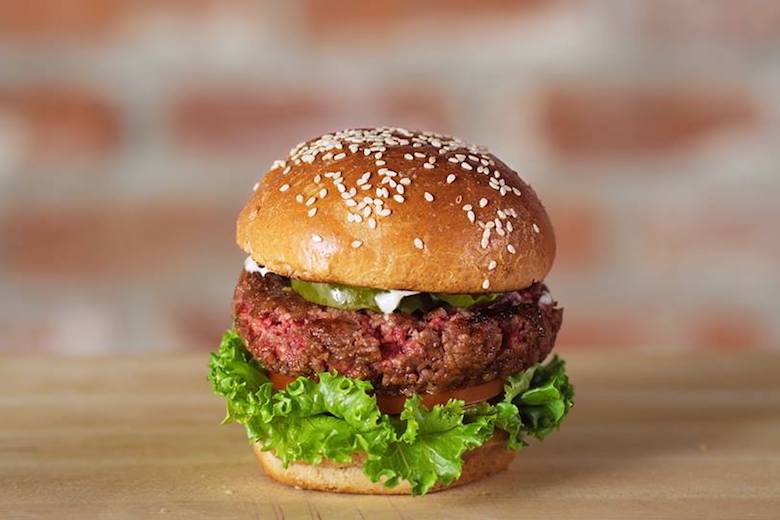 Why all the buzz around plant-based burgers and lob-grown “meat?” Really, it depends on who you ask. Photo courtesy of Facebook/Impossible Foods

A version of this post originally appeared on FoodPrint and has been shared with permission. It has been updated for timeliness.

Any non-meat eater can tell you that meat substitutes aren’t new. A quick trip to the health food store or over to Chinatown has turned up everything from textured vegetable protein to mock duck for generations. So why all the buzz around the arrival of new plant-based burgers and lab-grown “meat?” Maybe because they’re the technological promise of preserving our planet by disrupting meat production, or because they’re a terrifying adventure in science fiction dining. Really, it depends on who you ask.

We’re still figuring out what to call them, but meat substitutes—with commercial names like Impossible Burger and Beyond Meat—can be derived from plant protein or from cells grown in labs, and they’re about to become ubiquitous. So much so that recently, with a lot of fanfare, fast-food giant Burger King announced the arrival of the Impossible Whopper, their new vegetarian burger. Vegetarian burger options have been available on the fast food scene for some time (and have always been more widely available outside of the U.S.), but they’ve flown mostly under the radar. Yet, Burger King is taking serious pride in its meatless Whopper, something that, if asked a decade ago, many of us would have sworn was, well, impossible.

If you’re late to the fake meat/alt meat party—or “clean meat,” as the industry prefers to be dubbed—here’s a catch-up. There’s a bunch going on here, and none of it is simple.

Most people can’t eat an Impossible™ Burger in one bite, but you aren’t most people. Head to our locator to find one near you. #ImpossibleBurger #ImpossibleFoods impossiblefoods.com/locations

What Is Lab-Grown Meat?

The first, and most controversial, is lab-grown meat. You can’t find it in your supermarket yet, but it’s making its way there pretty quickly. Let’s discuss the basics so you can learn why some people are skeptical and others excited. Lab-grown meat (and in this case, the term “meat” is fairly accurate, since on a cellular level, that is precisely what it is) is made by taking a biopsy from an animal’s muscle and then using it to grow more muscle cells in a mixture of nutrients that enable them to multiply, thereby creating meat … from meat.

Animal welfare advocates see this as a way to avoid unethical treatment—and slaughter—of animals (though some will point out the exploitation of the animal being biopsied). And from strictly a no-animals-have-to-die standpoint, that is a clear and legitimate argument. Looking for solutions that diminish the suffering of beings is a worthy goal, especially if eaters don’t have to compromise their meat-filled lunch to do it.

Some food safety and public health advocates see the uniformity and sterility of lab-grown meat as a big plus. The risks associated with food-borne illnesses could be reduced by this technology; there would be fewer cases of E. coli, listeria and salmonella poisonings since contact with manure is eliminated, and it could prevent livestock diseases such as swine flu. Antibiotics are presently used in lab-grown meat since the current culture methods used are susceptible to bacterial contamination. But that could change once the proof-of-concept work is finished. At that point, systems would be scaled up and the cultures grown in purely sterile environments and without antibiotics, which would preserve a critical public health resource. And if the industry does manage to replace industrialized meat production, a lot of communities would fare a lot better without factory farms in their backyards.

Why Lab-Grown Meat Has Environmentalists Divided

Environmentalists, however, are split in their responses to lab grown meat. Proponents say cell-cultured meat will release far fewer emissions into the atmosphere than animal agriculture does. Some argue that the land we currently use for raising animals could be converted to vegetation. This would increase carbon sequestration efforts and could significantly contribute to combating climate change. Others say this technology essentially replaces one resource-intense practice with another (very expensive) one. The comparative research on this is slow moving, though, and the externalities involved are still being weighed.

Why Lab-Grown Meat Gives Some People the Heebie-Jeebies

Some opponents caution that our food system is getting progressively more lab grown and industrial, and getting farther away from the values that really matter when it comes to our food system: land stewardship, farmer advocacy and small-scale solutions. Consumers are wary of technologies such as genetic modification in their food supply and are prone to the heebie-jeebies (a habit that can be broken with assimilation, and easily could be in this case). But people are reluctant to accept food they perceive as unnatural and repeatedly push back on scientists with the age-old question of whether we should do something just because we’ve figured out how. I’m not here to quote Jeff Goldblum to you, but you get the idea.

What Are “Alt Meats?”

For a reducetarian—a person trying to eat less meat—it’s a pretty cool time to be alive. Even if you’re suspicious of the methodology, makers of products like the Impossible Burger and Beyond Meat are scrambling to make a perfect replica of a burger (and other meats) so you don’t have to give up on that meaty flavor you have come to expect and love. These are plant-based alternatives, not meat cells grown in petri dishes.

Whether you’re keeping it old school with plant-based meat alternatives like Beyond Meat, which uses pea plant protein and dyes it with beet juice, or eating an Impossible Burger whose key ingredient has been genetically engineered with yeast, bacteria and algae to mimic meat, you’ve got options. They’re flooding the market, and investors are eager to be a part of the trend.

The Impossible Burger uses a leghemoglobin “heme” protein that is supposed to imitate the bloodiness of a good old-fashioned beef burger. The alt burger creators are daring eaters to tell the difference between their burger and its four-legged alter ego. (Think Pepsi Challenge, but in 2019.) The pitch has the potential for brilliance: If the likeness of meat is achieved, then meat eaters will be willing to swap out their burger for something burger-akin. If they can’t tell the difference, and they gobble them up, we could dramatically reduce the amount of meat being eaten. This would reduce carbon emissions and animal cruelty, simply by providing an alternative and hoping no one misses their real burgers.

But critics like Friends of the Earth have expressed doubt about the safety of products like heme because it’s genetically modified, and just as with other genetic modifications, there is risk of environmental contamination and the loss of control of the engineered organisms. The food has gone to market with minimal oversight from the FDA, and that has a lot of people feeling nervous about the lack of transparency in a product that isn’t fully understood by the public.

Pork myotubes isolated by none other than New Harvest Research Fellow Jess Krieger! For eventually making 🥓without the 🐖!

Okay, but Really, What Do We Call Fake Meat?

We’re not the only ones struggling with this question. Just as dairy farmers and associations are upset about alternative dairy products—like soy “milk” and almond “milk”—being called milk, the beef industry is upset about calling fake meat “meat,” saying it’s confusing for customers. Calling it “clean meat” doesn’t make them any happier since it suggests that animal meat is inherently dirty—unsanitary, dangerous or immoral. Calling it “alt meat” might not sound meaty enough to appeal to consumers trying to convince themselves they’re eating meat. Calling it “fake meat” sounds pretty unappealing since we have so many negative associations with fakery.

And who’s going to regulate these products? After a heated turf war that was downright endearing in its ridiculousness, the FDA and USDA have decided to share jurisdiction over alternative meats. Traditionally, meat falls under the purview of the USDA—but there are occasions where the FDA gets involved. For instance, if a food product has less than 3 percent raw meat or less than 2 percent cooked meat in it, it falls under the purview of the FDA. Another murky example is that egg-processing plants are under the jurisdiction of the FDA, but egg-product-processing plants (for items like liquid egg whites) are under the jurisdiction of the USDA. Your head spinning yet?

Classifying alternative meats has been unsurprisingly complex, with both agencies having the interests of the industries they represent in mind. The USDA could upsell farm-raised meat and label alt meats as “fake” to appease the livestock industry, whereas the FDA, which regulates food technologies, could promote these food products and label them whatever would sell best. How this shared jurisdiction will shake out remains to be seen and whose interests will be promoted is still a question mark, so stay tuned.

One Thing Eaters Can Agree On: Transparency

Here’s the thing: Silicon Valley and its tech culture are going to keep offering up sexy solutions to problems that actually have pretty simple answers. If you’re a vegan or vegetarian, lentils are great! And if you’re a vegetarian jonesing for something meatier, you could try an Impossible Burger, or you could enjoy a nice meaty portobello mushroom. But if you’re usually a meat-eater, and you’re now eating one of these meat alternatives (and lentils just would not cut it for you), then this swap could possibly be a better alternative.

Until we know more about the full impact of these products on humans and on the planet, the jury is still out on whether they will be celebrated, feared, avoided or ignored. Regardless of whether and how eaters take to these various alternative meats, it is clear that consumers are concerned about how their food affects their planet and its inhabitants. Transparency is more crucial than ever, especially for eaters who care about animal welfare, sustainability and their own health.