New York-based Foodstand connects users in over 50 countries for both online and in-person activism. 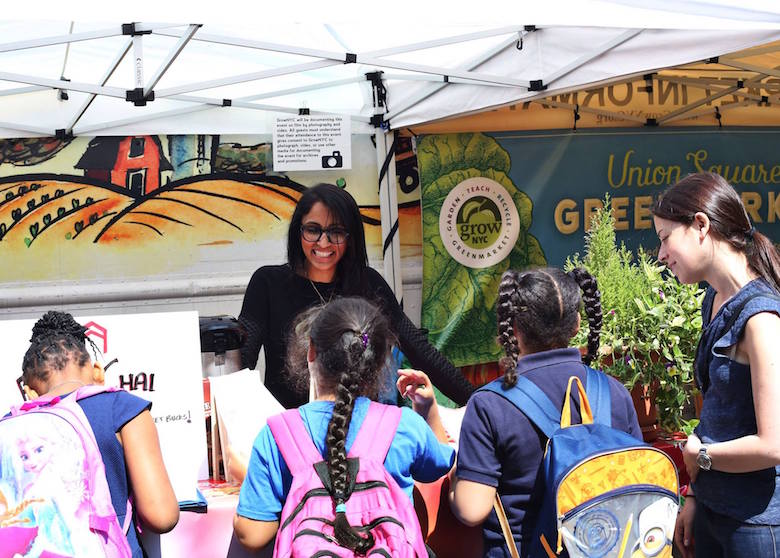 Rachna Govani is the co-founder and CEO of Foodstand. Photo credit: Facebook/Foodstand

Partly in response to the deluge of farmers market Instagrams and #onthetable pictures, Foodstand—a “good food community” and app—wants to give well-intentioned and curious eaters a platform to create and learn about a better food system.

We sat down with Rachna Govani, the co-founder and CEO of Foodstand, to talk about the group’s evolution and what they’ve got planned for this weekend’s Food Loves Tech event (tickets and more info here!):

Edible Manhattan: I remember being invited to the beta testing of Foodstand in 2014. Things look a lot different now!
Rachna Govani: It does! We knew that many people were learning how to support better food, whether through cooking or shopping, primarily through talking to their friends. This was the catalyst for creating Foodstand as a scalable forum where people can learn and stay informed through a digital platform.

The beta version was much more a tool for inspiration, similar to Instagram. We had an initial hypothesis that if we mimic an existing behavior, like food photography, we’d be in a position to help people stay inspired. But it can fall flat in that it can leave you feeling defeated by lack of knowledge or call to action. So, in February 2016, we gave our community more of what they wanted, which includes more ways to learn and act. It links insights to offline settings, such as conferences, farmers market experiences and new products.

EM: How are you linking what’s happening online to in-person experiences?
RG: On May 17, we celebrated Jamie Oliver’s Food Revolution Day with a discussion of Michael Moss’s book, Salt Sugar Fat. This was part of the monthly book and film club we launched, which focuses on a new book and film related to a campaign. We’ll read or watch as a community, create a toolkit to host a chat and give people a way to share their insights. It’s been well received and gives the average eater another way to connect offline and then take that experience back to Foodstand online.

EM: At a lot of good food focused events, you tend to see the same faces. Are you finding that Foodstand’s audience is more diverse?
RG: Our audience is thought of in three sections: food heroes or the converted, that’s a small and mighty section, a huge population of conscious or curious eaters that is values driven but not spending the money every day on smart food choices, and those who default to quick stops at vending machines or fast-food restaurants. The general makeup is 75 percent food lovers and 25 percent professionals. We consider professionals anyone from food writers and artisans to restaurateurs, chefs and policy wonks.

Foodstander @gingerandchorizo has made a millet and oyster mushroom bowl with a side of harissa. Delish!

EM: What about the community’s geography? Is love of good food and ’gramming a New York thing?
RG: Not at all. While 65 percent of our users are in New York, the other 35 percent are located in 56 other countries. Hearing the global discussions on tipping has been fascinating. A restaurant owner in Bombay and a restaurant worker in New York were discussing the problems their communities were facing in relation to tipped workers. GMO labeling has also been a hot topic. The community discussed proposed solutions, like QR codes that could work internationally but not in the States, which is incredibly valuable information for policy makers. On Foodstand, it’s fair game for anyone to participate.

EM: Have there been any other interesting global discussions?
RG: Absolutely. The latest study on GMOs came out a few weeks ago, and a lot of Europeans found Foodstand because of our partnership with Jamie Oliver, who is tremendously popular in Europe. Reading the different perspectives on GMOs from U.S. and European users was so interesting and exciting. We’ve also seen discussions between farmers and eaters across the country, e.g., how best to set up a CSA. We believe that pooling collective knowledge from across the globe on issues that affect us all will incite political and consumer change.

EM: You mentioned that each month there’s a new campaign that Foodstand focuses on. What’s in store for June?
RG: This month’s focus is No Food Waste. There’ve been so many studies on the drivers and potential solutions to food waste. In the States, 85 percent of our food waste comes from homes and point of sale exchanges. Consumption plays a big role in the waste problem, and the most effective way to subvert the most tons of food waste is through consumer education campaigns. So, that’s what we’re doing. We want to incentivize people to take action but also to learn more about what they can do on their own.

Each week, we’ll put out a new category of content and members are asked to share their no-waste achievements for prizes from our friends at The Brooklyn Kitchen. At Food Loves Tech, we’re creating a “Food Too Good to Waste” gallery in partnership with Dig Inn, GrowNYC, ReFED and Aliza Eliazarov that’ll focus on the food life-cycle and food that doesn’t fit into spec. It’ll be like a museum exhibit that people can walk through, sample foods and get recipes for repurposing and reusing food.

The campaign will culminate with the “Be A Zero” challenge on June 30, asking our community to have a completely waste-free day.

@sunsoulwellness has us up and loving this veggie bowl! 🙌🏾

EM: So you’re really utilizing technology to invite people to have offline experiences.
RG: Yeah, we really want Foodstand to be a tool that gives people information and ideas for making real-life changes. One of those MVP moments was at our Michael Moss book club. We posted on the Foodstand app asking members to check in and see who was at the event in case they were looking for a friend. What we got was one person who was a representative for Wellness in the Schools and another who was a school wellness instructor and had never heard of WITS. It was so cool to see our technology create a meaningful offline connection.

Networking can be so challenging and exhausting. In a room of 100 people, there’s a lot of information sharing that could be happening, but you have to filter through so many meet and greets before meeting someone who may have information or opportunities you’re looking for. We’re facilitating more direct networking and finding that it’s been beneficial for our users.