The Secrets of Danny Meyer’s Success

I would’ve liked to hear a bit more about his food, but the discussion was certainly fascinating without it. 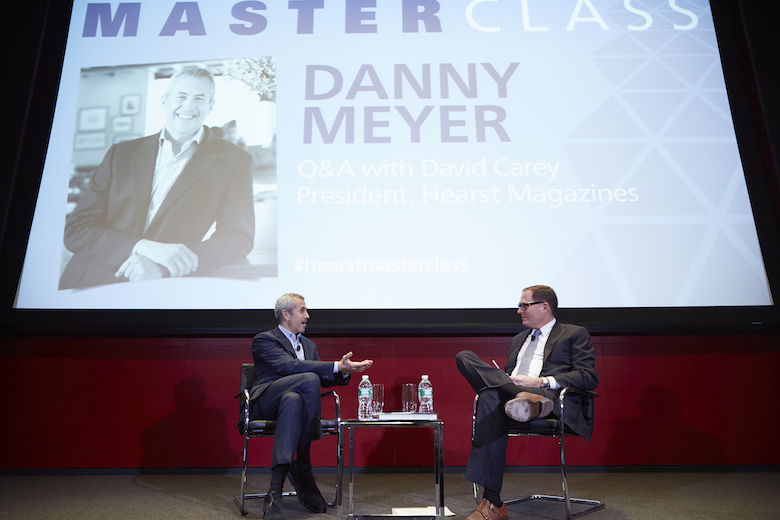 “He didn’t even talk about food!” exclaimed a Hearst Magazines employee last Thursday evening, after watching restaurant mogul Danny Meyer chat on stage with Hearst president David Carey. And she was right — in the hour-plus discussion, food was a peripheral topic at best. Though Meyer built his reputation with critically lauded restaurants both high (The Modern) and low (Shake Shack), the cuisine is now almost besides the point. In 2015, Meyer is a businessman, first and foremost.

The event was dubbed a “Master Class,” an opportunity to see two titans of commerce hold forth on matters of empire-building, customer service, and the industry parallels between media and hospitality. It was attended primarily by Hearst employees, a chance to see their boss talk shop with masters in their respective fields (past Master Classes have featured Barbra Streisand and Patti Smith).

If you’ve ever seen Meyer speak before, you know to expect polish. He’s quite smooth, delivering a laundry list of talking points — in a way that never makes them seem like talking points. He’s like a charming dinner party guest who just happens to be giving corporate messaging for Union Square Hospitality Group.

It’s messaging that many people want to hear — Meyer regularly presents to Fortune 500 execs, and his book Setting the Table quickly became a hospitality industry go-to (the book was also referenced several times by Carey and Meyer on stage). In essence, Meyer seems to have a golden touch — Tabla is his only restaurant that’s ever shuttered — and it’s not accidental. Aspiring entrepreneurs want to know his tricks.

At the Master Class, Meyer was not shy about sharing these tips. At core, he believes that good hospitality comes first from treating your employees well. If they are happy, he says goodwill will seep into every public relationship — from suppliers to customers to stockholders. It may seem a little simplistic, but Meyer has the track record to support the potential platitudes.

He is also not a man who’s afraid to admit being wrong. Meyer told an anecdote about a committee he once created to decide on matters of interior design. He thought it would give voice to his employees, but ended up miring the process in bureaucracy — the committee was eventually scrapped. Similarly, Meyer made it clear that his much-vaunted decision to eliminate tipping was something of an experiment: “We’ll see how it works out!”

I would’ve liked to hear a bit more about Meyer’s food too,* but the discussion was certainly fascinating without it. Anecdotes such as why he has chosen not to open a Vegas restaurant like other empire-builders (Teaser: he doesn’t like the perfume they pump into casinos) made for great listening. Not to mention hearing Meyer’s views on everything from “hot restaurant trends” (they don’t matter) to Instagramming your dinner (disrupting an industry). Well worth the price of admission.

*Confession: I ate a 10am ShackBurger last week.